While hanging in Sweden both Fred Anderson and myself were totally taken by our screening of the follow up to Thriller-A Cruel Picture, Breaking Point. Bo Arne watched the film with us and had lots of interesting comments to make. The film itself is a CRAZY "pornographic thriller" as the original title claims. Here is a synopsis of the film and I'll follow up with some other facts in the next post. Also, here is a truly awesome poster image. This movie will have a more limited audience than Thriller-A Cruel Picture as it is loaded with hardcore acts involving gear shifts and penis fly trapping-but I think it is an amazingly cool cult item. Even with some wonky English dialog (delivered in "English isn't my mother tongue" fashion), combined with both the content and commercial results of Thriler-it is fascinating.
It needs a good release... you hear me out there DVD companies?? You'll be showing some balls (for real) by grabbing these ghoulies! 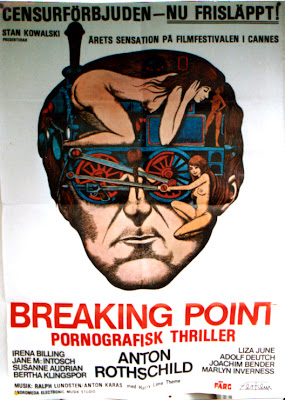 Breaking Point... A Synopsis of Swedish Sin
Opening on a sinister looking eye watching an elevator fall in a darkened hall, the camera cuts to a woman in the supermarket. Already the audience knows the mundane everyday world of shopping and carrying groceries is about to be destroyed in her world. And it is. Brutally attacked by an unseen assailant, the scene contains forced sex as well as visceral bludgeoning violence.
The first word of the film is uttered as we meet our "protaganist"Bob Bellings at work. An unassuming presence at his office desk, Bellings checks and stamps papers with a grim robotic precision and a donut glaze over his eyes. Those same eyes light up as a woman passes by however and he only says one thing.
"Bitch."
Obviously, this guy has a problem with women.
Bob watches as a news broadcast talks of the rape and violence perpetrated by some "bastard illegal citizen" (according to the police officer being interviewed) and alternates dreamily between watching the women in the office and staring down his female coworkers as the television gives the ladies of Stockholm some advice.
"Keep calm and let him do what he wants. Worse comes to worse you'll only get raped."
Also the "well researched" statistic that 89 percent of women have rape fantasies is interpreted into that the rapist is simply giving most women what they want...but the cops do request that he stop killing them!
Not exactly a feminist tract so far.
The women of the office flirt with Bob right after this is mentioned, because in Breaking Points world NOTHING gets a woman horny like rape talk. Well, at least 89 percent of them. He can not process this though, and instead of lust taking over for Bob, the only obvious reaction he expresses is rage. He takes this feeling with him away from the office and into the streets. More stalking, more raping ensues.
"Undress you."
However, the rapes become carnal events as the women give into Bellings-allowing him to kiss the semen from their faces after he is finished with them. He also fantasizes the rapes again in strange sequences that involve flys landing on penises and being painfully flicked off.
Amidst all these afternoon activities, he spends time alone at home, building model trains and fantasizing intently on his post job antics.
For some reason he will not turn his rage on the women at work, and does so in the most passive aggressive way he can. Yep, by masturbating into a cup and spiking the coffee of a woman that beats him down (at least verbally). His plan is thwarted as she adjusts to the taste and enjoys it. More rage and venting on those outside the building ensues.
Now things get weird!
A law has been passed according to the ever present television narration...all citizens MUST carry a gun, and can just go pick it up at any weapons shop. So Bob does, and he also takes some police issue "fragmentation" ammo from a rabid gun dealer who wants to see the streets "cleaned up." After a few test shots, it would seem the bullets will leave a huge mess of anything it hits.
And then he picks up a child... and I'll leave it to you to see what happens. Of course Bob also encounters a woman who wants to fuck his gearshift and then is kidnapped by robbers. Shifting gears with the still drying fluids on it, Breaking Point suddenly becomes an action film... and the whole experience unravels until the final twist is revealed. Bellings is shown for exactly what he is and the audience is left to either scratch their heads or be left in awe. Now we are left to gather what is real, imagined and wished for in each and every scene of coupling carnage.

A truly demented ride to say the least... tomorrow we'll get into how this was made, who made it and some other fun surprises. The story OF the movie Breaking Point is as interesting as the film itself!
Posted by David A. Zuzelo at Sunday, June 10, 2007