Here is part 2-you can read the first part by starting here: Part 1

PastaPocalypse 80:After They Baked The Big Apple

While Mad Max was a hit all around the world, it wasn't until Mad Max 2: The Road Warrior that suddenly jock-strap clad warriors wasting about the desolate future became an all out Italian box office blitz. Suddenly EVERY producer that was already investing in action features realized that with a minimal bit of dressing they could up convert their ballistic special effects into a world market hungry for more MadMaxian Entertainment. Grab a few dune buggies (now armor clad in bizarre bits of semi-dangerous looking metal), hockey pads and a prologue sequence explaining how “they” dropped the bomb and viola... instant sales!! Far too easily dismissed and ignored amongst the horrorcentric eurotrash fan, the Post Apocalyptic genre of Italian Exploitation Cinema is one of the best distributed types of films and most entertaining sub genres ever created. Don't argue with me, I'm set on this point. As with the action films, many top talents were employed too create these amped up spaghetti westerns in drag-and around the globe film fanatics flocked to the rental shelves for them, as did the bored and jaded viewer. Some even became staples of Saturday afternoon UHF, and would even come back as Mystery Science Theatre 3000 fodder.

While it is commonly sited that Enzo G. Castellari's The Bronx Warriors is the start of the cycle, we have chosen to include the two Bronx films in the main body of this book. Both are much more a combination of The Warriors and Escape From New York and both are certainly outstanding films worthy of the attention they deserve with full reviews. Castellari did show up loaded for mutated bear early on however with the trashy classic film, The New Barbarians. Produced by Fabrizio De Angelis, this one works as a wild pastiche that sweeps the Mad Max / Clint Eastwood drifter into a whole (urr...hole) new territory. Timothy Brent stars as Skorpion, a wanderer that stumbles on a beautiful young woman being troubled by a wandering gang of “Templars” and of course he can not resist lending her a hand. Turns out our man Skorpion is a reformed Templar member himself and the leader of the roving band of miscreants, the giant One (played with monstrous scene chomping by George Eastman), decides it is time to go to war with Skorpion based on this offense. Well, he also rapes our hero once he captures him (and watch as Brent has to sell a wounded ass limp)... so perhaps the motivations of the conflict are more romantic than they seem. Joining the fairly good side are Fred Williamson as Nadir and Giovanni Frezza as a little boy that is a whiz with machines and cars. Nadir packs his explosive arrows, Enzo packs his triple camera slow motion set ups, the special effects guys bring the blow up bodies and extra gas for the stunt buggies to fly about. It is a perfect action adventure film, unspooling with vigor like a comic strip brought to life. Unlike the usual poor connotations of being comic book-ish, this works because The New Barbarians is utterly unpretentious matinée movie fun-just as it should be. A very influential film during the PastaPocalypse to say the least, and Castellari would be copied and cloned time and again. Claudio Simonetti's score would also set the tone for almost every other film to come as the Goblin member created a minimalistic synthetic landscape that surrounds and enhances the mood and images to perfection. 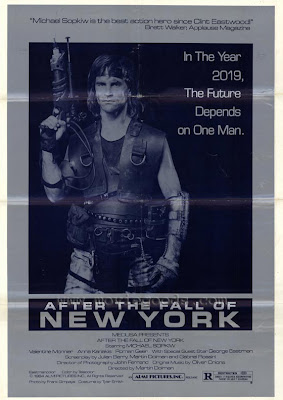 During the same year, another classic was spawned and became a huge influence on what would follow as Sergio Martino cranked out the audacious combination of Escape From New York's plot and added liberal doses of consummate eurotrash scripter Ernesto Gastaldi's warped sense of humor by having the final fertile woman in the world being wooed by a mutated George Eastman as Big Ape. 2019: After The Fall Of New York, where it is proclaimed that they “baked the Big Apple,” is a rollicking action film that features a good cast, a cool Oliver Onions score and a fun range of bizarre characters mixing it up in fight scenes that are always satisfying. After The Bomb is dropped the nasty Euraks, led by the sexy Ana Kanakis, are out to find the last fertile woman in the world-and lucky for us it turns out she is hidden inside New York City's corpse. Out to stop them are the Pan American Corporation led by Edmund Purdom(!!)-who assembles a crack team of mercenaries to infiltrate NYC and bring the woman back to Alaska (hah!) where it is safe. Parsifal (Micheal Sopkiw) is our lead man-a combo of model good looks and man of action brawn, always ready to kick some apocalyptic ass,. He demonstrates this straight away in a very Road Warrior styled scene involving auto dueling, which was another post Mad Max 2 pre-requisite. Joining Parsifal are Romano Puppo, whose Ratchet character has one of the coolest weapons ever seen in an action film, Hal Yamanouchi and a dwarf they call Shorty... of course! The aforementioned Big Ape is played to the banana's hilt by George Eastman of course-full of fury and the desire to spread his apey seed! The action scenes pile up as do the exploding heads and vile sewer crawling sequences until it all ends with a downbeat series of splatter scenes for our good guys, leaving only an escape into another galaxy as a conclusion. Yes, you read that right. 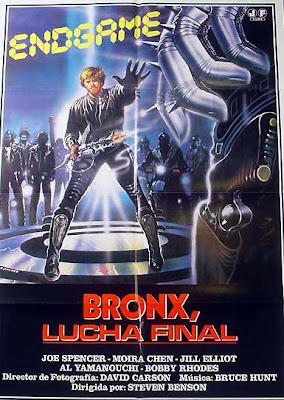 2019 is more interested in special effects than Castellari's film and is full of miniature sets and backdrops that appear much grander than the means used to create them. And have no fear gorehounds, effects guru Paolo Ricci pours on the gruesome nastiness. Martino made another somewhat futuristic film-Hands of Steel-that is great fun, though it falls far shy of 2019 and becomes more a violent action film with the as-advertised cyborg angle. Very worth watching, yet somehow not very post nuclear...

Between The New Barbarians and 2019: After The Fall Of New York the tone of The PastaPocalypse was set-and perhaps it could be said that the entire cycle peaked in quality as well. But that is no knock! The fearless fun level was set and many of the next films manage to entertain as much as these two rough and raw flicks.

As the celluloid bombs began to drop hard and heavy a few Italian Co-Productions were churned out, most notably She (a very bizarre and funny “adaptation” of H. Rider Haggard) and the often mocked but beloved by myself Warrior Of The Lost World. Warrior feels more Italian of the pair, with Robert Ginty and a talking motorcycle battling the evil Donald Pleasance with the help of Persis Khambatta (who couldn't turn her Star Trek role into a career it appears). Great cheap fun both... but mere time wasters suitable for a cheap night of video renting when compared with what was coming to your VCR next.

Aristide Masseccisi never met a fad he didn't love and that is a fact. Under his screen name of Joe D'Amato he made two genuinely cool action/post nuke flicks back to back with the meager resources of his production house, Filmirage. Beginning with Endgame and continuing on with 2020: Texas Gladiators he created two sterling late night action classics with all of the trappings from the PastaPocalypse rolled into there running times. The MVA-M (Most Valuable Ape-Man), George Eastman was also on hand to write Endgame and co-direct 2020:Texas Gladiators! Now that is a pedigree... 50 years after 2019 (Martino's film set the date of the PastaPocalypse it seems!) televised death sports are the game and New York City's cut rate cadaver is the battlefield. Shannon (played by the one and only Al Cliver) does the unthinkable and spares another player upon triumphing at the game-much to that participants immortal shame. And a damn shame it is that Karnak isn't happy about being tooled in his sport. Even more of a shame for Cliver is that Karnak is George Eastman! But Cliver has it good as he pairs up with a telepath in the skinny shape of Laura Gemser and gets a new mission to keep him away from the games. Shannon is to escort her and a band of mutants out from under the dreadful fist of the state police. Sure, why not? But he could not prepare for a sect of vicious blind monks, nor the other bizarre cretins the band will encounter as nearly everyone is sliced up and down and backwards and forwards in unending action sequences. Of course, it wouldn't be fun unless Giant George could get his square up showdown-and the final frame is cliched fun-a bizarre non payout that still pays off as they attack each other...for the Endgame! Silly fun throughout, Endgame lacks the gloss of Martino's effort and the style of Castellari-but it does carry the Joltin' Joe D'Amato threadbare charm and a grooving score by Carlo Maria Cordio... one that is equally as slim as the budget of the film! 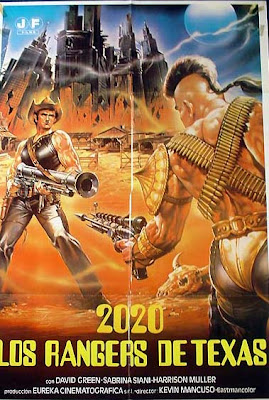 2020:Texas Gladiators is the less successful film of the Filmirage PastaPoaclyptic Pair, yet this strange movie does have a lot of things going for it. The plot, though beyond minimal, is really different than the standard run of the mill action fest. Built on western styled action (hence the Texas moniker) with “indians” barnstorming the baddies and Al Cliver meeting a strangely early demise, the script also features a baddie that is TOO damn bad to stay with his own group of bad guys! Add to that bizarre notion the fact that Harrison Muller Jr. plays the nut named Jab and 2020: Texas Gladiators becomes even more outrageous. Muller Jr. is about as wooden an actor as I can name, bless his two expressions... I look forward to all of his appearances. When Jab hooks up with a badder group of evildoers in order to commit acts of rape, robbery and violence it brings him head to head with his old band of merry mother grabbers... and everyone is going to die. While it is one note, if nothing else it can be said that 2020 exceeds viewers sleaze expectations by opening with a very long sequence that fits in with the D'Amato era of Nunsploitation, using a few odd religious items to offend amidst the carnage and nasty action.

It is all a bit scattered, but makes for fun viewing for sheer cheap thrills. Cordio contributes more good, if droning, music and there is one really well done Russian roulette sequence that is memorable. Far from a perfect film, yet somehow perfect for completists. In 1989 Filmirage would once again go dystopian with Deran Serafian's bizarrely comedic entry Interzone. This strange adventure tale stars Bruce Abbott of Re-Animator fame and lady bodybuilder Teagan Clive, and though it may not succeed as an action film at all, the movie is entertaining in the Filmirage manner. Also, Interzone is worth watching for fans of Beatrice Ring, her Zombi 3 infamy and good looks make the film more watchable.

Hey guy, 2020 Tex Glad is one of my favorite B-Post Ap. movies. Thanks for mentioning it. However, I think you may have gotten the role of Harrison Mueller wrong. Jab is the dark-haired sidekick of Peter Hooten...with a hot beard and goatee. He is tied up as punishment in the salt mine for defying the brutal overseers. He is a "good guy."

Anonymous said...
This comment has been removed by a blog administrator.
4:30 PM

Anonymous said...
This comment has been removed by a blog administrator.
2:52 PM