In a conversation that recently popped up at Eurotrash Paradise it was pointed out that I had known a "kid" by the name of Bruce Holecheck for pretty damn close to a decade... which got me to thinking that the very first thing I'd written for the web was a bit on Italian post nuke films entitled Dystopia Rides A Dune Buggy. I'd met up with Bruce in regards to that-but what struck me most was that I was STILL obsessed by this particular sub-genre of eurocult cinema. They were among the first of the euro films that really captured my attention thanks to Television showings on my local UHF channels way back when. While working on a book with my friend Paul Cooke on Italian action cinema of the 80's I could not ignore these beloved movies. Simple action films gussied up with science fiction / Mad Max trappings-they never fail to entertain me. What follows in the next few days is a draft for an appendix to that book-this should take a few days as it is rather long.
I'm no "Post Nuke Historian" even though I did get that label slapped on me in one rather infamous afternoon-hell, I'm just a guy that likes watching grown men ride motorcycles in jockstraps. But in this little fad you can find the modernized Spaghetti Western-populated by top talents in the directors chairs and in front of the cameras! So here is part 1 of my overview of The PostNuke World of Italian Action! The Pastapocalypse! 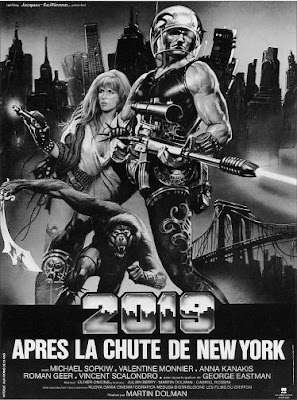 The Wild! The Savage! The Wide World of Italian Action!

While action movies were our focus during the writing of Tough To Kill we could not help but want to include a wider variety of titles. Tough To Kill, as a genre header, embraces the hard nosed action films that resemble the Neo-Pulp aesthetic of Men's Adventures books like Mack Bolan and Nick Carter:The Killmaster as a rule of trigger guard, but there are so many marginal titles that we felt they were worth some coverage. While the action genre was expanding through Italy producers were employing the same crews to hop on trends set by films like Mad Max, Conan The Barbarian as well as capitalizing on the ever popular Beasts Going Wild theme that too this day has not gone out of style. When Conan was splitting skulls across silver screens around the world every Italian producer wanted to have at least one battleaxe of a film in hand to sell, along with with a gloriously detailed poster image to draw hungry fantasy fans into theaters. Titles such as Umberto Lenzi's fantastic Iron Master, Joe D'Amato and Al Brescia's cycle of Ator films, Tonino Ricci's Thor The Conquerer and the awesome Throne Of Fire splattered across video shelves and drive-ins, joining the American films such as the Deathstalker series to keep Sword and Sorcery fans happy. Even the god of gore, Lucio Fulci would craft his own strange take on fantasy films with the gauzy Conquest, a truly insane spectacle indeed! Giant Killer Crocodile models are undoubtedly in deep storage in a Cinecitta warehouse as I type this essay, a reminder of the creepy creatures that included Fabrizio De Angelis' Killer Crocodile films, and I'm certain a wealth of rubbery shark fins are keeping them company. A flood of evil eating machine movies cluttered the shelves, though many would never find their way into the United States either due to legal issues or distribution troubles. Bruno Mattei's Cruel Jaws, Castellari's Jawstastic “homage” The Last Shark and even the Filmirage Deep Blood are all still titles that require some searching for the intrepid viewer to spear. Other sharkers would mix in action and drama plots, especially Tonino Ricci's Night Of The Sharks.

In many cases these movies provide more entertainment than not only the rip offs that are still coming out to this day, but perhaps to even the legitimate sequels to Jaws! And hey... Fabrizio De Angelis couldn't even allow Larry Ludman a day off without ripping off The Karate Kid! Pugilism was popular, and De Angelis produced and directed the Karate Kid redux series, Karate Warrior 5 Times over, even creating another bizarre entry with the truly abominable yet stultifyingly watchable Karate Rock. These films range from boring to bizarre to wildly obscure and it did not take long before nobody cared. Sergio Martino would even throw down with The Opponent and toss in some mystic martial arts action with American Rickshaw, though these would be incredibly boring-distilling the Tough To Kill essence and leaving a hulking shell with nothing to do but languish and torment the viewer.

Even though Science Fiction elements would appear in some films, especially rip offs of The Terminator and Aliens via the Bruno Mattei factory (Robowar and Shocking Dark respectively), Martino's Hands of Steel and even the slightly sad but awesomely fun Cywarrior directed by Giannetto De Rossi, nothing could compare to the long lasting and incredibly entertaining post nuclear blast films that fell out in the wake of Mad Max 2: The Road Warrior. Written and directed by some of the best talents in Italy still working at the time, populated by a cast of classic faces and new stars and ruled by totally berserk scenarios... it was a great time in Italian exploitation cinema. One that is worthy of it's own look, because these films are not simple science fiction, but so full of ACTION they became epics that capitalized on a popular scenario and spun off into something special and unique. The PastaPocalypse!