Film critic and all around good fella Bryan Senn goes the extra mile today with his Eurotrash Pinnacle entry. If he isn't taking a bath with a Franco film you can find him painting himself black and white and banging a drum somewhere on vacation.
Or...
You can go visit Bryan on the IMDB by clicking here! How long can I hold off starting a Senn Forum on the imdb? Not long!

LADY FRANKENSTEIN: Nudity, gore, monster mating, gratuitous Joseph Cotten, and two creatures—one an ugly hulk with a penchant for slaughtering copulating couples, the other a “satisfier of strange desires”—make this one of the most unique and bizarrely entertaining Frankenstein entries to ever clamber off the cinematic lab table. Among its many charms are: 1) a close-up of Dr. F. pushing a juicy brain into his monster’s empty skull cavity with his fingers; 2) a creation sequence in which, for no discernible reason, a bevy of bats flit and squeal about the creature’s body on the operating table; 3) the creature’s face catching fire during the animation scene, with the good doctor promptly putting out the flames with a rag!; 4) former Mr. Universe (and Mr. Jayne Mansfield) Mickey Hargitay as an arrogant, sarcastic, cape-wearing police inspector; 5) the hulking, hydrocephalic-looking monster going on a rampage of murder (with naked nubile nymphs his seeming targets of choice); 6) Rosalba Neri seducing her dead dad’s assistant into donating his own brain for her experiment!; and on and on…

THE GREAT SILENCE: Along with THE GOOD, THE BAD AND THE UGLY, my all-time fave Spaghetti Western. The completely unique SILENCE offers: 1) A novel wintery landscape that seems bleaker than any seen-it-a-million-times-before dusty desert; 2) A damaged, silent hero who lets his Mauser do the talking. No need to blah-blah-blah when you can just point to your slashed throat, shrug, and shoot instead; 3) That cool-as-shit Mauser itself and some fine potato-shooting practice; 4) Some really oogey oooh-that's-gotta-hurt thumb-fu; 5) The subtle, almost likable villainy that is Klaus Kinski and his “girly shawl”; 6) The late, great Frank Wolfe as a comical sheriff who loses his horse, loses his prisoner, loses his life, and still wins our sympathy; 7) Vonetta McGee and her "body like a boy" (as noted by that irrepressible funster K2); 8) Morricone's absolutely haunting musical score. 9) Luigi Pistilli dripping slime while extorting everyone in sight and ordering brutal hand-burnings right and left; and 10) An ending that stands you up, slaps your face, then kicks you in the nuts while your jaw drops to the floor and you make noises like a squirrel.

BLACK SUNDAY: Mario Bava’s nighttime atmosphere, prowling camera, and moody lighting vividly creates a Gothic shadowland of doom and dread. Images such as a lantern suspended in total blackness or a face suddenly appearing out of the darkness both startle and chill. And standing at its center is the iconography that is Barbara Steele in her career-making first starring role. Steele’s mix of beautiful innocence and smoldering sensuality codified the good and evil that could drive men to their nirvana or to their doom (sometimes simultaneously). More than any other Eurohorror, Black Sunday weaves its potent spell to draw the viewer into a shadowy world of palpable evil, making it one of the most atmospheric, eerie and frightening horror films of the 1960s.

NIGHT OF THE HOWLING BEAST (aka THE WEREWOLF AND THE YETI): My favorite Naschy/Daninsky flick has it all: Brutal werewolf action, cruel mountain bandits, sexy cannibal cave-chicks, flayed-skin-as-poultice medical treatments, battling babes, and the friggin’ YETI, ferchrissakes!

RETURN OF THE BLIND DEAD: I love all the Templar films (well, apart from the is-he-an-actor-or-a-wooden-Indian Jack Taylor-starring, ship-in-a-bathtub misfire that is THE GHOST GALLEON), but the second of the Blind Dead quartet features the tightest script, best-drawn characters, most action, and a hear-a-pin-drop-a-mile-away suspense-laden climax that never fails to set my blood pumping.

REVOLVER: Perhaps THE most intelligent and involving Eurocrimer I’ve seen, with Oliver Reed and Fabio Testi turning in Oscar-caliber performances. But just because it’s smart doesn’t mean it’s a sissy movie, for it features some brutal, in-your-face violence and gunplay, and emotionally wrenching twists and turns. An atypical Eurocrimer that tops and transcends its genre.

SUSPIRIA: Argento uses color and sound and blood to make one of the most stylish and visually striking horror films ever made. Literally stunning in its visuals, SUSPIRIA is a breathtaking ride into an Old Europe nightmare. And standing at the center is none other than Elizabeth Collins-Stoddard!

WHAT HAVE THEY DONE TO SOLANGE? This is the one giallo that REALLY knocked my Eurosocks off. Lusciously photographed, clever, brutal, well-acted and well-cast, it’s a take-no-prisoners trip into the sleazy world of black-gloved killers.

THE BIRD WITH THE CRYSTAL PLUMAGE: The most coherent and clever of Argento’s giallos. And you gotta love a character who keeps the riff-raff out of his artist’s “loft” simply by removing the ladder to his door and raising housecats for meat!

MANHUNT: Henry Silva and Woody Strode are a pair of New York gangsters/hitmen sent to Milan to track down a small-time pimp (Mario Adorf). It turns out the family-oriented, middle-aged, well-dressed procurer is the HERO, lol (and a disturbingly likable one). Vicious action, a sleazy Silva, an unsmiling/all-business Strode, plenty of gratuitous nudity (including hippy go-go dancers… always a plus), a likable main character who draws you into his plight, and an exciting, brutal, and novel climactic “showdown” in a junkyard make this perhaps the most all-out entertaining Eurocrimer I’ve seen. 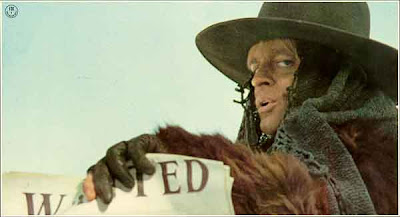 Right above this one ;)