The tops of Today are from Bob Sargent, the big brain behind one of the best fanzines of all time, Videooze! Without this magazine, no Thriller-A Cruel Picture for me... You can chat him up anytime at Eurotrash Paradise where he moderates the water cooler discussion and shares sleazy movies about midgets, babysitters and Ursula's Sister.
Yep, the man is a giant (well, literally) amongst fans...check out anything he has listed you haven't seen yet.
Also, note the artwork in the banner is by Comix legend and monster maniac Neil Vokes. I am pretty sure this piece appeared in Videooze. Who cares, it is AWESOME...

HUNCHBACK OF THE MORGUE (burning rats, hunchback sex, and the Primordial!!)

KING OF KONG ISLAND (radio-mind-controlled gorillas, a mad lab in the jungle, and Brad Harris dancing like the whitest white man on the planet!!)

TORTURE CHAMBER OF DR. SADISM (evil Chris Lee with a perforated face, the gay highwaymen, and the Forest of Hanging Corpses!!) 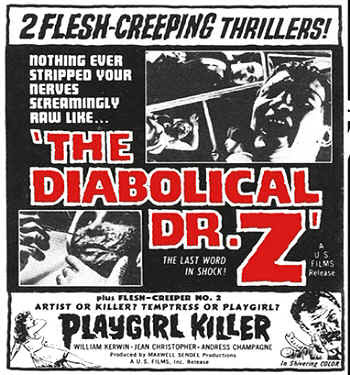