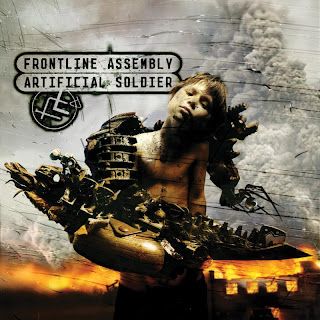 A few items today, first I wanted to finish up my year end review by posting the one that I've had in mind since June, and that would be best album of the year. For me it has to be Front Line Assembly-Artificial Soldier. Rare is it that I listen to an album so many times and don't get tired of it. From the opening salvo of "Unleashed" and the harsher second track, "Low Life," the album roars out of the speakers featuring some of Bill Leeb's best vocals in a while riding over a stream of complex rythyms and the patented bass lines. Each song is great, most especially the mid-tempo "Dopamine" which follows perfectly on the heels of "Buried Alive." Buried Alive is one of those tracks I point my non electro/industrial fans towards-a great sonic blast of melody and crunch.
Artificial Soldier feels like an extension and update on 1999's FLA album Implode, and that is high praise from me.
Now then...onward! I want to point out that James Newman (co-author of Night Of The Loving Dead-and reviewed here) has a new and VERY limited release coming from Neecessary Evil Press entitled The Wicked. I love those old EVIL DEVOURS TOWN IN MESSY WAYS novels-and am looking forward to this. Mind you, there are only 350 copies being made, so if you want it, you best order it now. Go HERE for more details.

And in the what is coming soon department... I've got a plan folks, and this time I won't be doing all the writing. I've been lucky enough to meet some very cool and knowledgable people-and I'm compiling a little something called The Pinnacle Project. I don't remember who started the idea over at The Eurotrash Paradise, but I'm intrigued to get as many top 10 lists of all European Trash films (and that has a very WIDE interpretation available for that last word)-and find out what films remain as constants. The flip side to this is that I've found many holes in my explorations-and I want to spelunk those as soon as possible. If you have a top 10 and want it included in this experiment, just post it in the comments and I'll amend them in as we go. Have fun and I bet many of us will find at least a film a two a day we never considered at the top of the heap. A fun project for evaluating, re-evaluating and exporing I think. That will begin over the weekend and will be interspersed with some more reviews-though I' d like to expand a bit upon my review style for the blog.
Also, look for GaspEtc.com to update shortly, I've been pressed for time but there will be a few DZ items in there I would think, especially a triple sized CD review of some recent Jess Franco releases!
Posted by David A. Zuzelo at Friday, January 05, 2007

wow! haven't thought about Front Line Assembly for awhile. really enjoyed their music along with Skinny Puppy back in the early days of the industrial genre. Loved their music video incorporating the Japanese sci-fi GUNHED. I'll have to check this out. Thanks for the tip!

Thanks...I agree, I put them on the backburner, but this release actually got me to listen to the ENTIRE back catalog! Hope you like it as well!