Dan Taylor, the mad genius behind The Hungover Gourmet and Exploitation Retrospect gives us his top ten Eurotrash films today-a fun mix of "classics" drenched in trashy goodness. Give his sites a chance and if you EVER get to try this mans pulled pork sandwich you'll be a hungover gourmet fan for life. Promise.

I'm thinking of Pulled Pork while contemplating the greatness of Demons-Lamberto Bava and Dan Taylor should be proud. Yum. Demons... I mean..uh..pork.

1) NOSFERATU: Not just my favorite Herzog/Kinski flick, but the first
Kinski flick I ever saw.
2) THE GREAT SILENCE: I'm no Spaghetti Western fan, but this is a
standout with Kinski stealing the flick as a vicious, vicious villain.
3) HUNCHBACK OF THE MORGUE: Maybe the definitive Eurotrash movie.
Naschy stars as a vengeful, lovesick hunchback who hooks up with an
evil scientist.
4) THE BEYOND: As much as I love other stuff from Fulci, I really
consider this his masterpiece.
5) TENEBRAE: Argento at his "paint the screen red" finest.
6) NIGHT OF THE ZOMBIES: My all-time fave DAWN OF THE DEAD rip-off. I
think it's brilliant but many hate it.
7) DEMONS: Still remember seeing this in the theater and being blown
away.
8) RETURN OF THE EVIL DEAD: The second of the Blind Dead flicks, it
just nudges out the first and fourth entries in the series.
9) HORROR RISES FROM THE TOMB: More kitchen sink cinema from the mind
of Naschy.
10) CANNIBAL FEROX: Crazoid jungle gut-munching with a brain-pounding
soundtrack. 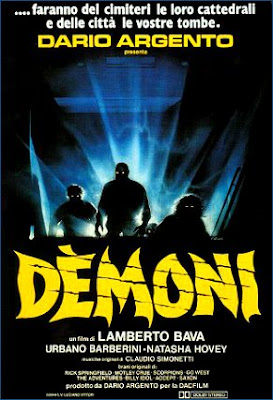