Al Brescia and some Spacey HiJinx! 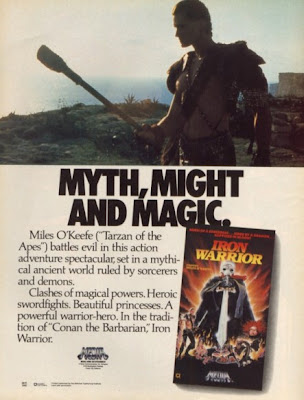 A little hard drive sweeping uncovered two cool eurotrash items to share! First, check out this video ad for Al Brescia's entry into the Ator films. Starring Miles O'Keefe, this one is a total goofy blast. Those two words sum up lots of Brescia films, though he did make a number of solid entries that appeal more for the quality than the bizarre funk of the films. Revolt Of The Praetorians springs to mind, along with some of his crime films. But I'll always love him for strange things like The Beast In Space, the demented Cross Mission and most certainly his Star Wars "tributes" that include War Of The Planets and War Of The Robots.
Then we have a total mystery... an unmade Star Wars ripoff from Italy!! Click it for a large view... You can see a little more on this at the groovy Popcorn and Sticky Floors HERE. Props to them for the original scan...
What a film this could have been!! A film to be directed by Anthony Ascott (Guiliano Carnimeo) and feature spacey grooves via Stelvio Cipriani. Wow. Carnimeo made a lot of great Spaghetti Westerns-and this could have been a fun adventure flick for certain. At least we'll always have his Exterminators Of The Year 3000 to enjoy. It is interesting that the little kid in this artwork looks like Luca Venantini-who would end up playing a cyberkid / asskicker in Exterminators! 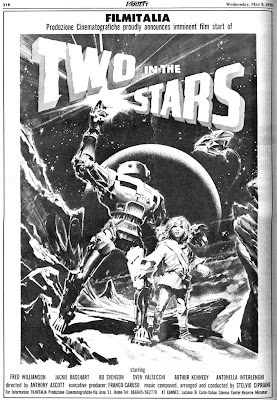 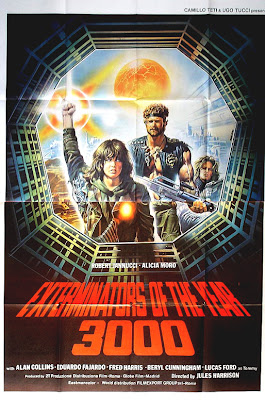 Hey David - can you please edit your posting and add a link to my blog where the image for TWO BEYOND came from? It a pain to scan in those big variety ads. Have to do the top then the bottom and edit the immages together.