Macumba'in In Ajita with Lina Romay! 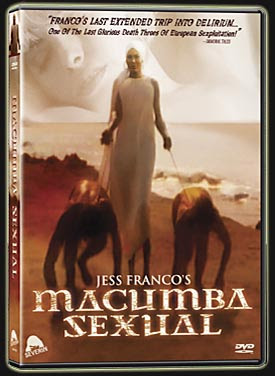 Just in time for Christmas I'm getting new Franco fun finished off my viewing pile. With the arrival of Die Sklavinnen from ABCdvd (via XPLOITED CINEMA)-I'm in Jess Franco overdrive. Not that I'm not usually interested in watching Franco, this just seems like too much good stuff popping up at once.
Severin Films has released two very interesting films, one essential and the other more a super cool curiosity than key title. The essential one is certainly the 80's Golden Films flick, Macumba Sexual. This period in Franco's filmo has been pretty tough for English language mono linguists to get into-but no longer! It has all of the best things about this time period-Jess was doing what he wanted to do with the resources afforded him-and here we have a sun drenched version of some of his darker 70's sex films. Lina Romay shows up in full Candy Coster gear with her wig on and her inhibitions checked far behind the last locked door she would encounter if she was really walking through Macumba's endless deserts. Antonio Mayans does his best as the disbelieving boyfriend and ends up enslaved as Princess Obongo (Ajita Wilson) infiltrates the mind and body of Lina's character in the most insidious fashion she can muster.
A wonderfully demented film that certainly is not a primer for Jess Franco 101, but fairly easy viewing that will shock newcomers and bore some I'm sure. Fah, I love it.
But the niftiest bit of this disc is the interview with Franco, a man that really can talk about his own work with both pride and honesty... he won't even allow himself a moment to sound pretentious about "his cinema." Lina Romay appears in this bonus section as well and lays to rest the fact that Ajita Wilson was indeed transsexual. Don't believe her? Well...
Excellent editing by David Gregory provides us with that pronouncement quickly placed on the heels of a nice long shot of Ms. Romay JAW DEEP in Ajita Wilson's area-and if anyone that is still doing interviews is an expert...Lina would be it.
I'm a believer...and it is officially clap the folks at Severin On The Back Day for this skillful edit! Thanks guys...by all means, every Franco fan should support these discs and Severin as a company. Lots of great smut dripping out under this banner...support 'em!!
Posted by David A. Zuzelo at Thursday, December 21, 2006

Sweet - I was glad to see this write up. I'll have my take on this film posted for Monday! Watch out!