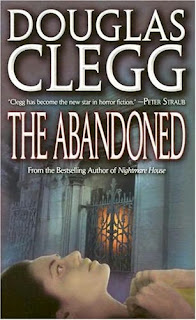 Ah, the joy of picking up a Douglas Clegg book that I haven't read-especially if it falls into his Harrow series. For those that don't know, Mr. Clegg is one of the best guys in the horror biz right now. His work bounces around in the genre (and outside as well) and he writes with a smooth pace and feel that propels his characters along their rocky roads and grabs me as a reader. I was very excited to see him going balls out (by his own admission before I'd read the book) and into splattery territory with The Abandoned. The series of Harrow stories intertwine and expand on each other very well-and this feels like it is almost the apocalypse of the tale...but you can't keep a good house down can you?
I'm not going to ruin the plot, but in broad strokes this book finds The Harrow House in a position to actually affect a wide radius of the town surrounding it. It has been a school, it has been a psychic magnet...but now it is spilling out and ripping at the souls of anyone it can find.
And man, does that house like to make people go berserk and kill kill kill (and then kill kill kill some more). The main characters are drawn to the house thanks to their psychic abilities (known or unknown) they have to find a way to stop the slaughter. Clegg always writes his tales to keep you guessing and this one certainly earns a "who will survive and what will be left of them" award.
Now, I don't particularly dig on Haunted Houses. No matter how popular other things get (ugh, the Zombie Glut for example), those damn spooky buildings just seem to keep on coming. Even Ed Lee couldn't get me into his haunted "Flesh Gothic," and I love reading his work...so I don't come out Clegg's Casa de Spook easily. The Abandoned reminded me more of James Herbert's outstanding tale of rampant naughtiness The Fog more than any haunting of any hellish house ever has. That works for it (I love Herbert's book) and against it (I love Herbert's book).
While the horror pours off the page in a torrent once the action starts, I found myself shocked to see that these moments are actually underwhelming in the tale when compared to the things that Doug Clegg does best. He breathes life into his characters and makes them feel real. The confrontations of fears in The Abandoned are spectacular (look for the gay bashing bar sequence in particular)-but the gore gets overdone and becomes repetitve, slowing down the action.
Yeah, I wrote that. Me, a fan of Shaun Hutson, Ed Lee, Guy N. Smith...a real true believer in the power of splat. The book works best when Clegg works his magic with the emotions and falls a bit flat in the "effects" department. Overall, not my favorite Harrowing tale, but loaded with some genuinely affecting moments and more dead children then you can shake a hatchet at.
Lawnmower? Lawnmower...nuff said.
Any horror fan will dig this book, and I hope that if you have not read his work this would make a good entry point for gorehounds to explore his other work. Keep a copy of The Attraction around, simply so you can read the amazingly great (and truly nightmare inducing for me) tale, The Necromancer for a peek deeper into Harrow.

But ya know, I did find a passage that REALLY made me happy that I spent my time in this book. I've harped on it in the past and frequently take books to task. Maybe it was when my buddy Curt at Groovy Age Of Horror called bullshit on my own writing that this stuck so hard. Characters are put into demented and strange and yes, totally unbelievable situations in horror novels. But the writer should be responsible not to make the reader FEEL like it is so unbelievable that it pulls them out of the story. As berserk as The Abandoned gets, that doesn't happen. There is a nice near prayer for true insanity to sweep one character away to escape the scenario she is in...but THIS is a perfect example of not wimping out and apologizing to your readers for writing a horror tale. Thanks Doug, I'll keep it in mind when I'm wondering how to pull that off with style.
Check it folks...and by all means, check out The Abandoned and more of Douglas Clegg (ahem...Nightmare House...ahem). Visit his website now!

From The Abandoned...one helluva line:
"While he knew that it was an impossibility that she could be there, something deep within him awoke to the impossible."

Man, I love that.

Nice write up David. You sold me. I'll go pick this one up for the New Year!

Groovy...I hope you dig it.
Snag up the mass market editions of Nightmare House and The Attraction (to cop The Necromancer) for best effect.