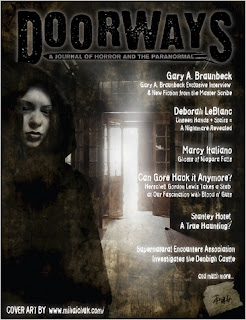 I just got word that the new magazine, DOORWAYS has published the first issue. I did a column for this one under my old CINEXTREMIST moniker covering a bunch of DVD restorations that I really liked. Also in there is Greg Lamberson (the director of the AWESOME film Slime City and novelist) as well as the one and only H.G. Lewis doing an article. It looks like the magazine is all over the map (I'll know more when I see a copy)-and worth a look for those interested in the paranormal and other such matters as well as the cinemaniacs.
You can find out more at doorwaysmagazine.com or order up at Lulu.com now via this link. I like Lulu's option of a digital edition as well...very cheap and a good way to check it out. Once I see a copy I'll go more in depth...the issue appears to be very large to say the least.

Here is a copy of the Table of Contents for your perusal...