Links and Projects from The Tomber

Lots and lots of stuff going on at Tomb It May Concern HQ these days. On top of starting work on a new novella (which is going quite nicely) that concerns missing Mexican Wrestling films, evil Luchas, Psychotic Lesbian ringrats and an evil count building a monster to destroy anyone that enters his domain, I've spoken with my old pal/moviemaker James Desert and will be starting work adapting his treatments of an upcoming television show into prose form. This sounds like a very neat action adventure show and I look forward to adding some of my own touch to the mayhem.
Draining? Sure.... but add in the final go ahead on the Lucker The Necrophagus novel/DVD styled extras presentation AND edits on Tough To Kill and I figure I'm never going to see sunlight again. Well, I will with my son at the park-even in late October. Gotta have the slide!
But ya know...I'm always up for browsing the web!
Here are some hotspots....
This one is a bit of fun for me as I've put a bit of storydump online. The first entry is the complete script to the first issue of Lucker The Necrophagus when it had the go ahead from Indie Gods Publishing. Sad to say it has yet to find a suitable artist that didn't bail out or simply vanish. I'd still love to do it...and if anyone reading has the time and talent to illustrate this-here is a taste. Personally, I really enjoyed writing this (and there are two more issues)-it is very different from the screenplay we worked on-comics and film are very different mediums, no matter what some folks think. What works in one doesn't in the other. So, check in every so often at The Story Hole for some cool (well, I like it) prose and other media.

Curt (of the always awesome Groovy Age Of Horror) has begun posting his novel online!!! I've been looking forward to this for years and it is at last spooling out onto my PC. Go here and dig in...batskin boots, evil beasts and sexual contact of the forbidden kind all await in Night Falls on a Fairy Tale!

We are looking to talk some serious horror comics in a group discussion on...SOMETHING! Come on down and help us pick a cool series to chat up at COMIX THAT WITNESS MADNESS today. I'm going to put forward Wolfman and Colan's great (and overlooked) Night Force myself. I love that book!

Audio Blogs are all the rage and here is a newish one with some AWESOME stuff! Jump into Leon's Stash!

I love Lina Romay. Seriously... I do. Here-read my tribute if you don't believe me and then come back. But THIS takes the cake. A great great site that is not work friendly. I found it uh...doing..uh...research. In my underwear. Well, sort of.... You'll see!! LINA FOREVER!

Finally, an extra big plug to Joe Horror today, this site is fantastic and really reads like what it says it is. An average bunch of horror fans watching a lot of different stuff and giving their opinions. They take a lot of bullets for me, and at the same time I find myself using some of their WORST reviews as a shopping list. I'm funny like that.... Check it out!

And here...random awesome poster, because no post should be imageless! 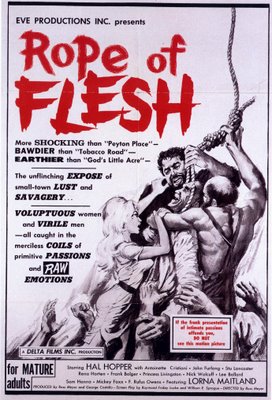