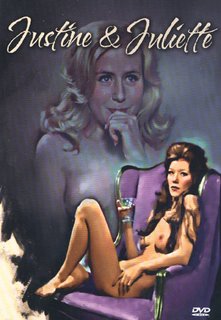 Let's start today with a link to my favorite blog, THE GROOVY AGE OF HORROR. The state of GAoH post is a nice look at what Curt is working on and bodes well for not only the future of his current blog, but an exciting new project as well. Good luck Curt, we are ready to read!

That said, I got another lesson in the category of "Swedish Sin n' Skin Flicks are STRANGE" with the arrival of Impulse Pictures/Xploited Cinema's new DVD release of Justine and Juliette. If you like your sexploitation with a hardcore edge, then this is for you. Swedish Vixen Marie Forsa (also seen in Sarno's classic vamper Veil of Blood as well as Flossie) is fantastic and easy to watch for sure as director Mac Ahlberg runs her and Anne Bie Warburg through lots of Sade styled hijinx. Harry Reems "pops" up and around and all over as well. Yeah, it's fun and it's wild, but damn is it strange. Crazy music, grrrrrrovy party sequences, upside down couplings and more wacked out prog music keep things rolling. It is nice to see this (and at least one other) on the market for English speaking audiences-the Swedish Exploitation films offer a whole lot of trash to the discerning fan of cult cinema. Now, could I recommend SOMEONE...ANYONE try to release Bo-Arne Vibenius' intense hardcore nihilistic masterwork BREAKING POINT? Just hire me to write those notes (plug plug), I love the film and have spent WAAAAY too much time writing on it already! After spending an afternoon at the director's home and watching it with him, there are some nifty stories to tell.
The print looks better than I expected and is letterboxed with removable english subtitles. A good purchase for you sexploiters. 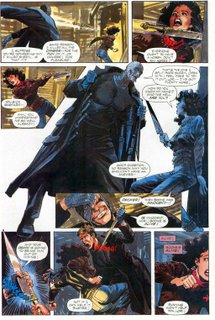 I've just finished reading the first long story arc in the Epic Comics series of Clive Barker's Nightbreed at last. I'd wanted to cover the whole thing in one post, but it is an uphill trudge reading some of these books. Better concepts than storytelling seem to prevail here so far. BUT, there are a lot more books to go. After the movie adaptation is finished, the story of the 'Breed continues as Cabal seeks to find a new home for the monsters in the world of normals. But of course some like to eat flesh (which is a no-no for the Nightbreed) and trouble is brewing. It becomes so outrageous (which is good) that it gets silly (uh, bad) very fast. I hit a breaking point when one NightBreeder with a removable spine uses said bony column to replace a fan belt. Ugh... But I'll troop on because the series is written by 2000 A.D. vets John Wagner and Alan Grant with art by Jim Baikie. I trust them to do something entertaining, and Barker's biggest beast of blood, RAWHEAD REX, makes an appearance. Let's keep our fingers crossed for some monstrous entertainment.

Finally, check out this monster flick coming from Anchor Bay...there is a trailer online and I'm down for any monster action. Hopefully I'll have a review shortly! 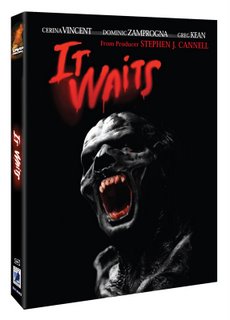