R is for Reaper... Deathbringer by Bryan Smith! 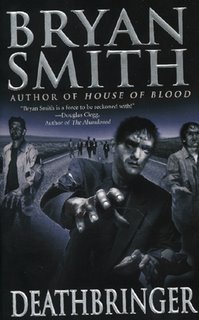 I love the Zombies.
So upon the arrival of the new Leisure Horror Club books I dug right into the latest zombie opus to splat the mass market, Deathbringer. Sure the cover ain't great, but Dorchester has a certain look to all of the horror paperbacks and this fits the bill. They should have featured the character in the book however...THE DEATHBRINGER, who looks a bit like a moldy version of Jonah Hex gone undead via a Spaghetti Western nightmare.
In brief.... the little town of Dandridge TN has been selected to herald THE FRICKIN' ZOMBIE APOCALYPSE (well, it has to start someplace)-and various and sundry characters get caught up. We have our semi-hero Mike O'Bannon (hey, didn't DAN O'Bannon direct Return of the Living Dead?)-who is grieving his recently killed fiance Hannah. And then we have Smith's starlet of the show, the truly fun spastic psychotic goth girl killer Melinda. Easily the most memorable part of the book, this girl is such a freakshow badass that not only did she kill Hannah, but she brought her goofball boyfriends out to screw her on top of the recently buried woman! Nice... Too bad that Hannah (said recently killed) is THE PRIME ZOMBIE! I'm diggin' it so far... enter a DEATHBRINGER (we know what he does, bringing death and all-no surprises here) and his nemesis (from a mystic order 'natch). All the elements of a zombie smashing good time are here.
Almost.
Now, don't get me wrong, Deathbringer is fast paced and features some really outstanding moments for sure-I loved the description of the head baddie himself and the antics of Melinda are really worth reading. There's gore and guts at times as well, no bullpucky here-graphic gore is always nice in a zombie book. But...
Curt at The Groovy Age of Horror has been kind enough to read several of my stories and offer criticisms and I think one applies here in spades. When he read an early draft of my Ascension of the Blind Dead he pointed out that I tend to apologize for my material at times. And he was RIGHT.
When you are writing a zombie novel you have to remember one thing, the reader is already there with you. Sure it's "Silly" but that didn't stop Guy N. Smith from writing not one, not two, but SIX Killer Crab novels. If I buy into the zombie story, but the characters repeatedly mention that this situation is absurd it drags the reader right away from the "reality" of the tale. With horror, you have to commit, and while Deathbringer obviously loves the horror, it falls into the poo-poo'ing of it's conventions. And that just kills the fun for me.
Reading through this blog, you'll see I love me some crap-ola. But in my mind it is NOT crap, it's great fun and I enjoy it. Joe D'Amato didn't say "A man can't eat his own guts" during Anthropophagus, he just showed it and I love that spirit. That is a commitment to being obnoxious and over the top. Bless his little heart, Joe loved to piss people off.
I would rate Deathbringer as a good straight to video flick that is a bit self conscious of it's budget restraints-fun, but not one you view a second time, even on cable...with the munchies.
Smith's characterization of Melinda alone will prompt to read his next book though, I'll hope for more gore and mayhem mixed with a healthy dose of unapologetically wild fervor. Guy N. Smith sold me crabs, I think this Smith can sell me some zombies.
Maybe next time...
Posted by David A. Zuzelo at Wednesday, March 01, 2006

Sounds pretty cool, Dave--and that cover seems right enough for a zombie book. One of these days I need to launch my broadside against the mainstream prejudice against the genres. Then maybe we'll have fewer "apologies." Keep on groovin'!