Creeping, Crashing and Smashing with THE SPIDER

March has been a great month for fans of THE SPIDER thanks to Moonstone.  Not one, but TWO excellent releases celebrate one of the coolest characters in the Pulp canon!
First up...  THE SPIDER #1. 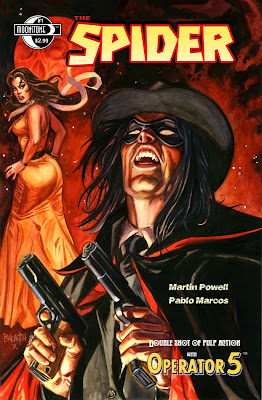 With a cover by Dan Brereton starting things off right, we get to the newest tale of the twin gunned mayhem maker with Martin Powell spinning the tale "DEATH SIEGE OF THE FRANKENSTEIN ARMY" as the main feature.  A brief 11 pager, the plot is compact and the dialogue sharp as Nita Van Sloan finds herself in the middle of some mad science monstrosity a-go-go action.  Luckily she is equipped to let her beloved Wentworth know where she is, and The Spider is on the case.  Spooky graveyards, misshappen grotesquries and monstrous bullet sponge beasts abound as the demented hero furiously fights for his lady.  But is Nita safe with an old friend, or is something more sinister afoot?  Well, it has a twist(ed soul) that you'll love!

The story is rather minimal, but the artwork by Pablo Marcos benefits from the almost entirely composed of eerie ambiance and graphic grue being slung around.  Marcos is a master and his monsters are hideously perfect.  Combined with the canny coloring of Jay Piscopo, the tale takes on a cool neo-noir of black, white and blood red, DEATH SIEGE OF THE FRANKENSTEIN ARMY is a sharp knife of a short.
The Spider #1 feels a little strange as it plays out like a superb finale to a longer tale, and while I'd like to have read it all, you can actually do so if you are a canny Moonstoneinite.  Check out the first prose volume of The Spider Chronicles and match it up with THE CITY OF THE MELTING DEAD for maximum effect.  This is like a crazed extra payoff.  Big bonus points for when Powell busts into pulp narrative over the grisly action and THE SPIDER....MASTER OF MEN is finally said! 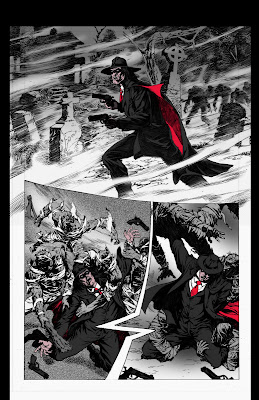 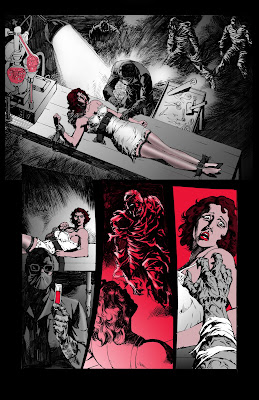 The Spider #1 starts a new serial with an introduction of Operator 5, an intriguing tale of Holy Rollers, Mind Control, Barely Concealed Curvy Backsides and Secret Agents.  Hey, you want my attention? Do this.  Operator 5 finds himself up to his ears in corporate politics and racial aggression in the first installment, going undercover to infiltrate the hate motivated Nordic Cross and finding himself on the bad end of a brain wipe to bring me back to the next episode.
Where The Spider story provides a nice thrill and tons of eye candy, this matinee to the feature impressed me in it's 11 pages.  The dialogue is a bit dense, but submerges the reader in the setting this character will be operating in, which makes me hungry for more.  The action may come late, but at a short length there is very little waiting involved.  Writer Gary Phillips has a nice way of bringing what feels like a classic radio play to work with the art by Roberto Castro.  Colorist Jay Piscopo stays on board from the first tale and uses the same motifs, but with an even greater effect.  The dreary depression of the unemployed mixes well with the shadowy style of the mysterious leader of Amalgamated Press and his corporate office.  I'm looking forward to more of this character!

Moonstone is doing justice to a pulp classic with these new comics, I can't do more than recommend them...because up next comes another tale of The Spider. Tune in next time! That is right after you go and order YOUR COPY of THE SPIDER #1 from MOONSTONE BOOKS. I'll see you next time...your secret decoder ring to the comics...TOMB IT MAY CONCERN.
Posted by David A. Zuzelo at Thursday, March 24, 2011

Beautiful artwork but The Spider himself seems off - and I mean more than the long hair.

Is he no longer entirely human? He looks part vampire or something.

Hi Aaron,
Th Spider is still make up to spook the bad guys, this is Moonstone's look for him. A longer wig and definitely a more "monstrous" appearance.
I like it myself, but it is a bit more extreme than most other versions I'm familiar with as well.

Good to know - I was kind of worried that another classic character was getting rebooted in the wrong direction.

Think I'll check this series out. Looking forward to your next review.