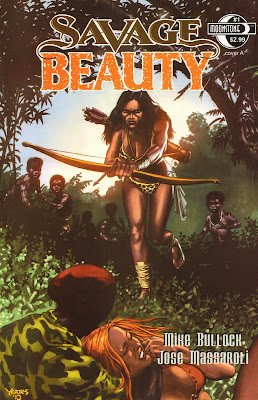 One of my favorite things about Mike Bullock's take on THE PHANTOM was the ability to mix high adventure and swashbuckling fantasy with a grounded take on the real world that gave a bit of weight to all the fisticuffs.  To put it nicely, now that The Phantom's employment opportunities have changed it is nice to see Bullock take that quality and create something new and unique with it.
And I do love a good Jungle Girl story!
Savage Beauty starts strong and fans of the Guardian Of The Eastern Dark will be pleased to see the intensity of that series has carried over.  The trick here is give us new heroes...and Savage Beauty does it in an interesting way.  After we meet our two heroines, Lacy and Liv, both seem as carefree as can be.  Suddenly the scene switches to a young girl being raped in Kenya to please a sleazy arms dealer.  From short skirts and sexual innuendo to screaming children, within two pages the reader is thrown in to the deep end of the pool.
I wouldn't have it any other way.
The villains get the bulk of the pages as we are introduced to the People's Liberation Army thugs and their leader Okoye and his beautiful (naturally!) evil companion Zuri.  They massacre and barter for weapons in the flesh of children.  These are bad people that are warned that punishment is coming in the form of a Jungle Goddess. They just don't care...evil fears nothing in the savage world it would seem.
They will learn.
Lacy and Liv are seen working as a journalistic tag team photographing predators between the horrors.  Bullock creates some great scenes as he manages to, in 3 balloons, show the ladies see the reality beyond their bubbly exteriors discussing that nobody wants to see predators in the wild and do what they can to cover it up. The scene is interrupted by the vapid poptones that pass for music these days, easy to listen to but empty to the brain.  Obviously, these girls are not what they seem.  And then they get to work.

The PLA is stalked, smashed and staked as the Jungle Goddess Anaya, in the form of two women, bring scars and fear to those that would harm their lands.  Aided by technology and using the weapons of ancient legend, the Savage Beauty is unleashed!

Bullock's writing is on point in this first story, setting both mood and characters in to play with ease. I know what is going on, but I want to know a lot more (and soon Moonstone!), you can't ask for more for a first issue.  Just because the enemies are serious and the story a bit rougher than what you may expect from the cover, Savage Beauty zips along with a nice NeoPulp style that isn't afraid to mix the naive elements of early Jungle Girl tales with the real life enemies of humanity today.  You'll grimace, but you'll also enjoy the fun of the action!  I highly recommend you check it out.
The artwork by Jose Massaroli is solid and refreshingly straight forward, the storytelling is well arranged and never becomes distracting.  The trap of Good Girl / Bad Girl comics is of course to just focus on the skin, but the first issue packs enough little details into the visual story that this doesn't happen.  I liked the marks of the Goddess being evidently shown as the tears of the downtrodden...I'll gladly take that kind of visual over an extra pin up or two.  The coloring helps more in the dark scenes than the light ones, but it never gets overwhelming, which is nice. 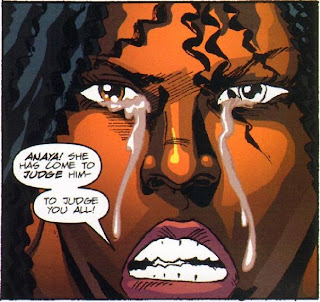 Excellent writing and very solid art? That is a good start to a series I hope runs for a long time! 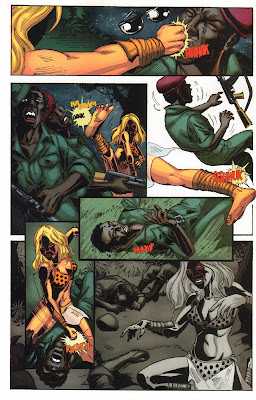 But you get more for your $2.99 with Savage Beauty #1.  Also included is information on TRI, a rescue organization for Child Soldiers, an essay on Jungle Girl comics, a nicely reproduced 10 page Fiction House reprint featuring great art by Ralph Mayo, a gallery of Alex Schomberg art and even some Sheena concept art featuring Raquel Welch.  Not bad at all!
Ask your comic shop or order directly from Moonstone, but grab a vine and swing in to action with Savage Beauty today! 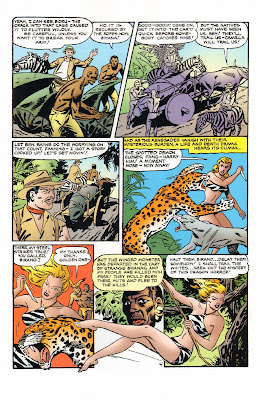