The Dead Man: Face Of Evil 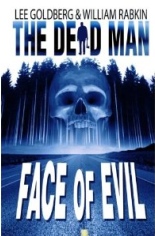 I sure do love my Men's Adventure novels, just check out the set of Pugilistic and Ballistic reviews.  I also long for the days when you could find them everywhere. While Gold Eagle plugs along and does a perfectly decent job, the genre itself has fallen off.  Not that I don't like The Executioner, but back when the market was strong for truckers alternating between wank mags and ballistic balls out action you had so many choices. While many of them were similar, there is certainly a difference between The Executioner and The Penetrator and The Ninja Master and The Destroyer.  We had variety.  I love variety.
And I fucking love tough talking action.

Maestro Bruce Grossman of Bookgasm passed me a copy of the new series lead in to THE DEAD MAN, which is touted as mixing the horror of King's THE GUNSLINGER with THE EXECUTIONER.
Yes! Variety!!
While I don't quite see the manly adventure part yet, I think this series has a ton of potential...so what is it about?

Now, you want to make me think someone is definitely a badass and ready to handle anything? Have him get hit by an avalanche and survive like a Popsicle for 3 months.  And then he comes back from the grave and is balls deep in a day or so.
The trucker inside me is woot wootin' and reaching for the next issue of Juggs n' Ammo!

But Matt is a little different...he sees his childhood friend rotting before his eyes, and suddenly all hell breaks loose.  Rotting flesh, fryer assaults and a ride down a sawmill ensue at breakneck pace.  I love it.  Matt is going to have to go all Bruce Banner here and wander the world trying to understand why he seems to be seeing some kind of death dimension now that he has come back from the beyond...and who exactly is Mr. Dark?  The tormenting voice that sucks lollipops and speaks in dread inducing Hahahahahahahahhhhh-isms seems to know why he is back.
Pick up that Axe you Dead Man-lets get to the bottom of this.

What stood out to me here is that authors Lee Goldberg and William Rabkin aren't really shooting, so far, for Mack Bolan's title, but the prose the pair wield is like one guy holding a pump shotgun and the other a sniper rifle. Sex. Violence. Gore. Humor.  It all works. The plot rolls with a surprising ease and doesn't offer up cardboard characters just blasting away.
I'm ready to read and enjoy...and learn a bit...about how to be so accurate with the right way to get a reader involved.  Both are novelists and work in the TV series paperback field and I think both styles are on show here.  The Dead Man is a perfect novelette in a can, ready to be adapted by whatever cable channel is ready to mix equal parts soulful sexual pounding with pulse smashing pulp action and a touch of horror.
I will say that my only quibble is that the first installment feels a bit drenched in Eau de SpawnFarlane for my tastes.  Mr. Dark has a clown appearance and torments an undead hero.  Uhhhh....not exactly the authors fault, but I think Spawn may have dominated/poisoned the well on that one.  But hey, if I can blast through an adventure novel that makes me smile and grimace and try to imagine what all that rotting flesh smells like, this is a minor drawback.

Gimme more of THE DEAD MAN...I'm ready to ride along.
The story is available as a print novella and an instant download, easily affordable at $2.99 via your Kindle.
Damn...truckers with Kindles.  I wonder if FLOPPERS has a download subscription....I will look into that!
Posted by David A. Zuzelo at Monday, March 21, 2011