Meme about Me Me Me...An Image Gallery

I was tagged by Neil at the excellent THE AGITATION OF THE MIND to participate in a very cool meme making the rounds online.  Now, I'm quite horrible at focusing on any one thing in particular when it comes to this blog, so I had to do some pondering.  I've pondered and twisted around a bunch of ideas-and came to the perfect cheat (of sorts) that befits the subtitle of this blog.  But first...the fun rev up the meme requires.  Is it me, or am I ridiculously hambrained when it comes to these things, but I find all this stuff more challenging than the actual blogging.

OK...so the idea, or remit, comes from THE DANCING IMAGE!  It was furthered by CHECKING ON MY SAUSAGES (what a great name!!)  The tagged are to share “a gallery of images chosen by you to stand for so much of what makes Cinema such a rich and exciting medium.”  Yep, gimme a loaded gun why don't you?  I love cinema, I love movies, I love flicks and I really really love TRASH.

I don't know if I've made this point on the blog before, but to me, when I say TRASH CINEMA I mean it lovingly. Yes, I was warped and embraced by Craig Ledbetter's EUROPEAN TRASH CINEMA and co-opted the term in to my private lexicon at that point. The TRASH in cinema is that which we used and crumpled up upon consumption.  A fast food to feed whatever bit of the imagination that brought me to the film I'm watching.  I also love the term because it lets me take a leveler to the playing field when I sit down to watch an Argento film, a Mario Bianchi sexploitation film, Transformers 2, a Koji Wakamatsu film, a Jess Franco shot on video Frankenstein film, an episode of Thundarr The Barbarian, Sasha Grey getting banged (seriously, only term to use) by a guy in a bear suit, Cannibal Holocaust or a pornographic film made by Alberto Cavallone that takes a midget and a trans-sexual maniac into a villa to make snuff films.  Ah, Baron Corvo, you blow my mind...  The media enters my head, I mangle it up and out comes the trash.  I have a big trashbin by the way...each element is equal.  Make no mistake, I'm not being lofty here, just honest.  Your mileage may vary, and I've certainly had many people question my critical faculties over the years, but for me, the movies and the media are part of the way I live-I can only do it this way.  Karate Warrior 6 stands shoulder to shoulder with Alphaville for my 90 minutes.

Back to business.  The rules:

1. Pick as many pictures as you want - but make them screencaps. These need to be moments that speak to you that perhaps haven't been represented as stills before.
Can do!

3. You MUST link to the original gallery at Checking On My Sausages and the gallery at The Dancing Image.  See above.

2. Pick a theme, any theme.
Oh, I had a few...I ran through ERIC FALK COCK (a series of male nude images from European Trash Cinema to compliment my Casual (un)Dress Friday-with tribute to one of my favorite "Yodar Danglers"tm Bob Sargent),  HARASSED HEROISM (beaten heroes, Spaghetti Westerns would be easy pickings), MY MONSTER MANIA (a tribute to rubber suits) and LINA LICKING (well, I do love Lina Romay and you can imagine what that would have entailed).  No joke, these topics all suggest the primal joy of cinema to me.
But then it hit me, I suck at meme work!  I yabber on and on about films and things on this blog, so why not some more.  So my topic is called NECK SNAPPING CINE-MOMENTS!
You would have to actually watch a few films with me to notice it, but when something pierces my brain shell I have a weird little tic that I notice. My shoulders drop, my neck cocks backwards and I can feel my face react really strongly, be it with a smile or grimace or other unseemly contortion.  I don't know if this is an emotional reaction exactly, but it is exactly why I load up Alfonso Brescia movies. I'm always looking for that feeling and nothing makes me happier--I may be titillated, shocked, surprised or amused, but I'm getting a genuine reaction.  And that is good.   My days are full of responsibility and *choke* thoughtful work...I don't have lots of time to be entertained, and these images are the ones that did it.

Some will probably be shocking, some may be funny and some may leave you stunned by their apparent emptiness of entertainment. But I see something there...I'm looking forward to going along on this ride through the things that my own mental dumpster still contains.  Just be ready for Eric Falk Nude Kung Fu saddling up to Godzilla movies and faux spiders!

And I'm cheating EVEN MORE...because this is a fun subject for me I'm going to present just a few here and then continue with these.  My only "rule" is that I tell you what I'm seeing.You'll scratch your head, you'll laugh or you'll click away screaming (because here comes BARON CORVO).  Lets see what I find.

Sounds a bit self indulgent, and I'd like to apologize to my fellow MemeOTrons if so...but cinematic richness is a'comin!! 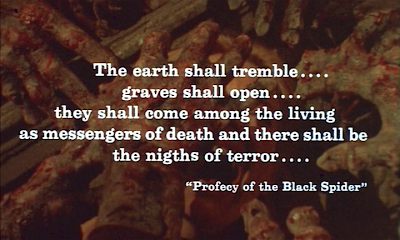 Not only is Andrea Bianchi's BURIAL GROUND a fantastic and wacked out slab of Zombie Trash Cinema, but it includes some incredibly cool moments!  This "Profecy" is a great finale-and includes TWO typos!!  So, I read it and say WOW that is cool. And then I read it again and wonder how the hell NIGTHS made it through.  "Profecy" is bad, but Nights is just wrong! 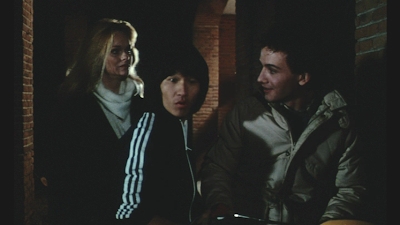 "Bad chop suey...so long!"  Pieces could dominate this list-for there are few more joyful Trash Cinema experiences available to us.  But a Bruce Lee clone, who certainly had a history with producer Dick Randall, popping up in a Chainsaw Charley chopping classic is incredible.  And wait...he attacks the female lead in KUNG FU TERRORVISION...gets his ass kicked by Susan George (woah, what happened Bruce #2??) and then blames bad Chinese take-out food?   DAMN! 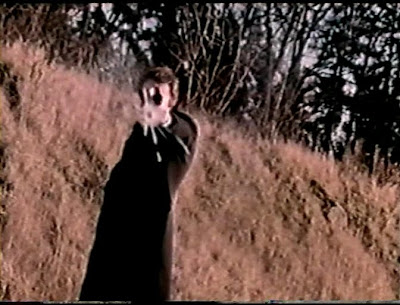 This image from Bo Arne Vibenius' sadly obscure follow up to Thriller-A Cruel Picture, Breaking Point, is an utterly amazing moment in a film full of vile and evil behavior.  I wrote a review of sorts for the film here (part 1 and part 2 )-and while Breaking Point features lots of strange visuals, this moment when our frustrated hero takes out his vengeance against not just the people in the film, but the viewer as well, is just fantastic.  Vibenius was frustrated with nearly everything in his film career at this point, and this image is a perfect portrait of the artist shooting the film right in to my memory.  Forever.  More is certain to come from this film.
Posted by David A. Zuzelo at Monday, August 16, 2010

The image from Breaking Point is very powerful.

We're used to seeing poses like that but directed at their own reflection (like Taxi Driver) rather than us. It sends a shiver down the spine.

Very true Stephen, the entire film is an attack on the audience by a filmmaker that, in my opinion, had some very special things to share. Commercial failures, bad business deals and disappointment helped create a "commercial" film that is anything but.
One of the highlights of my geek life so far was watching this with Vibenius while in Sweden securing the rights to They Call Her One Eye. We watched this and he had a bit of a time staying in the room through it. However, he told us about shooting this scene, it runs fairly long and I never realized we were watching a reflection. He points out and BAM...shoots the screen (and the viewer). Brilliant and a bit harrowing.
I would like nothing more than to see this get a legitimate release somewhere.

Thanks for jumping in - and for the great Vibenius anecdote.

Btw, your Vampires post a while back made my month - and how! :) I look forward to the rest in this series...

(P.S. When I think bad Bruce Lee-ripoff movies, I think Fist of Fear Touch of Death. A friend of mine was given it years ago by a relative who thought it was a genuine Lee movie and it's so fascinatingly awful we've watched it countless times since. It's gloriously bad...)