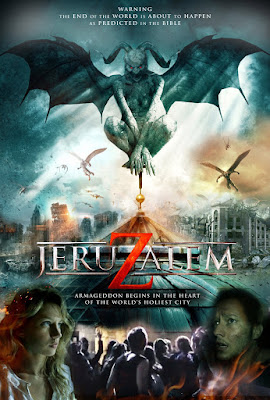 Well, if I had to start this years entries with a found footage film, why not go for one that takes a little more unique perspective and uses "glass" (minus the GOOGLE) to bring the viewer into a full blast Armageddon scenario?    Instead of a family menaced by something floating in the pool on a security camera, it's all first person shakiness for the most part.  Directors Doron and Yoav Paz (as THE PAZ BROTHERS) certainly gave it a good shot, employing Israeli actors (portraying Americans in some cases), and tossing in some surprisingly good effects to get across demonic possession and the final days of the holy city.

Our first person glass bearer is Sarah (Danielle Jadelyn), who is off for a quick vacation to Tel Aviv with her friend Rachel.  Just two girls looking for some fun..right?  Well, fun appears in the form of Kevin Reed, a slightly odd and slightly stupid douchey dude that manages to talk himself out of blowjobs on occasion.  He also talks a lot about his fascination with Golems and zombies in between attempts to get into Sarah's pants, and the trio decide to head to Jerusalem!  Eh...why not? Right?  Well...after settling in, hitting up the obvious parties and imbibing the usual stimulants in hidden clubs (uh..Holy City, folks..of course it's on the down low)... weird things begin to happen. Which, makes us remember that slightly long but utterly effective prologue I didn't mention. An early 70s exorcism...with a stunning effect that actually hooked me to watch the entire film.

It all goes wrong, and the endtimes arrive...but there is on final little shot for us to all enjoy as evil wins the day and seizes us...literally...all on it's ride into the heavens.  The characters try to endure, but really...who wins in Armageddon scenarios?

JeruZalem is not a bad ride to be honest, I enjoyed the faked employing of technology such as facial recognition software and Facebook profiling to shortcut character development.  But it gets a tad to frantic thanks to us being nailed to the camera at all times (minus one sex scene that blows the bonerism by using a stupid moralistic "trick" with dad texting his daughter while we watch her getting laid.).  There are some great ideas with different factions of the city being brought together, but it doesn't get explored much since we are basically running around. The occasional Z (capital Z..check the title) does show up, but they are more like D (for demons) if you ask me.  The film works as a nice reference against better (and honestly less shopworn found footage work) films like [REC], but offers a lot of potential to the viewers that may be up for the challenge.  Not entirely satisfying, but if it's a taste of what The Paz Brothers can do, I would go along for another ride.  Maybe next time lets try for a few more perspectives though...

Available on Netflix streaming... Not the worst Armageddon you find in random flick flicking to say the least.