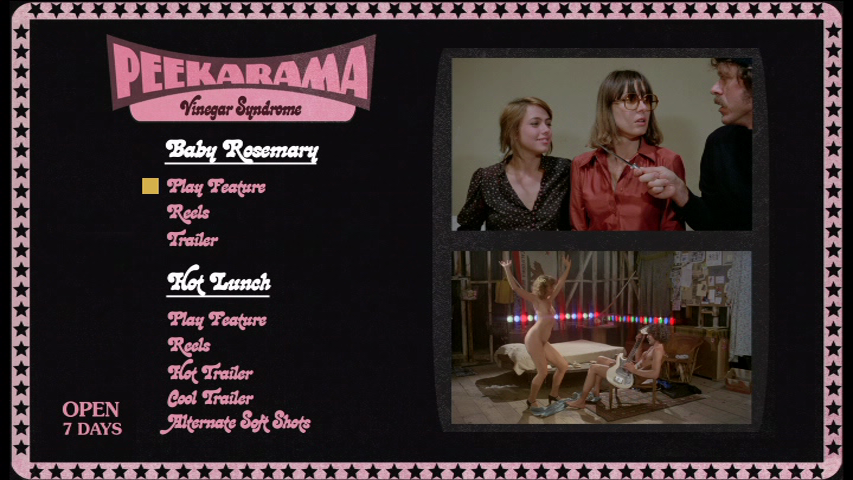 PEEKARAMA continues from VINEGAR SYNDROME with a double feature that had me drooling before I even had the disc!  Two films directed by John Hayes, the man behind the classic (and one of my all time favorite flicks) GRAVE OF THE VAMPIRE!  I did not even know he directed adult features, so I had no idea what to expect.  BABY ROSEMARY and HOT LUNCH are radically different in approach and content, but Hayes definitely brought some interesting skills to the table.  Both feature some nice location work and idiosyncratic performances that had me thinking back to the weird behaviors of those in the path of Caleb Croft.  So, lets take a look at VS-040, another set of adult entertainment to warp your mind!

Baby Rosemary recounts the story of the deeply troubled Rosemary and her relationship to her father, a mysterious figure that faded from her life after she was put into an orphanage after the death of her mother.  "Ya know, it's not really right for a man alone to raise a young girl..." 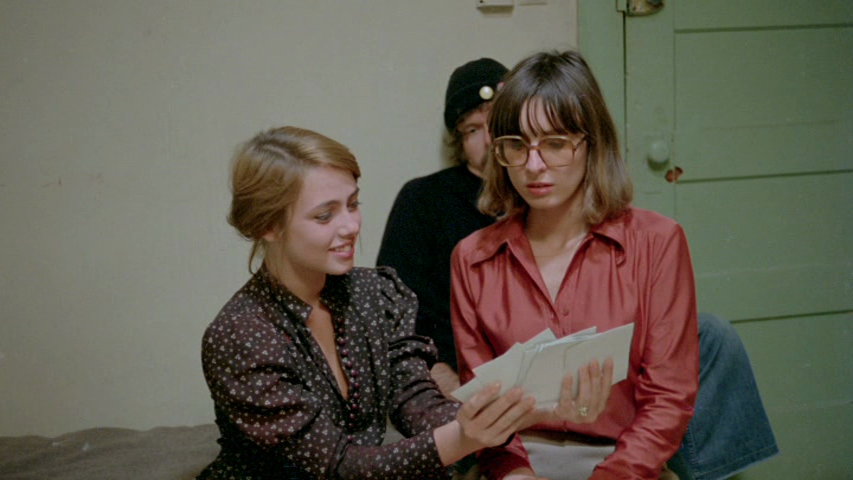 Well, Rosemary has definitely had trouble relating to men, as she rebuffs her boyfriend John (John Leslie) and finds herself in deep as she goes to her fathers apartment to find a ne'er do well couple in for a private session of porn picture taking with the mysterious man.  They take their liberties with Rosemary, and all hell breaks loose in her psyche after that!  She loses out on John, who becomes the fastest prostitute visiting dude to cop in uniform I can recall seeing in a film while Rosemary becomes a girl school teacher and hangs out with a dynamite duo of sex cult chicks that includes Candida Royalle! 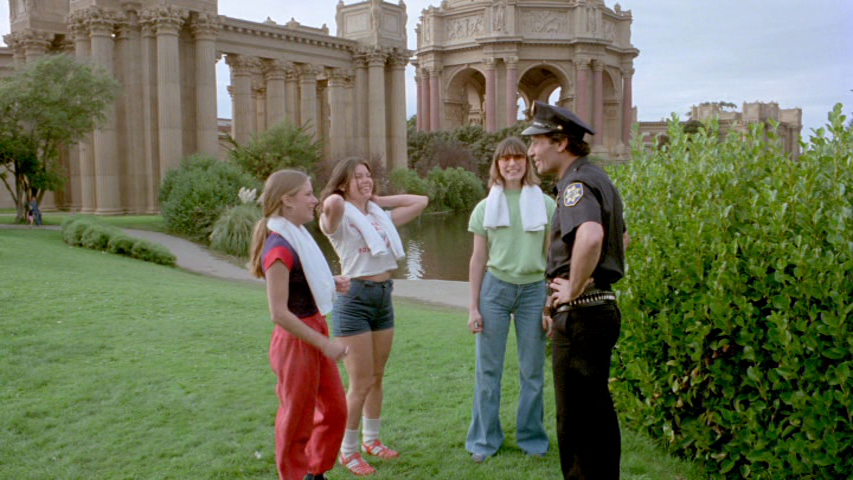 Well, the father passes on and Rosemary has a sexual awakening that includes re-traumatizing herself with the sleazy man from the apartment and letting John dry hump her. But once we get to the funeral parlor though, it's all body parts on and clothes off. John Seeman appears with the sex cult girls and things get out of hand. Or in hand. Lots of hands.  Rosemary finds herself the object of attention and desire, in the presence of the corpse of the man whose presence, and lack thereof, has warped her sexual life. 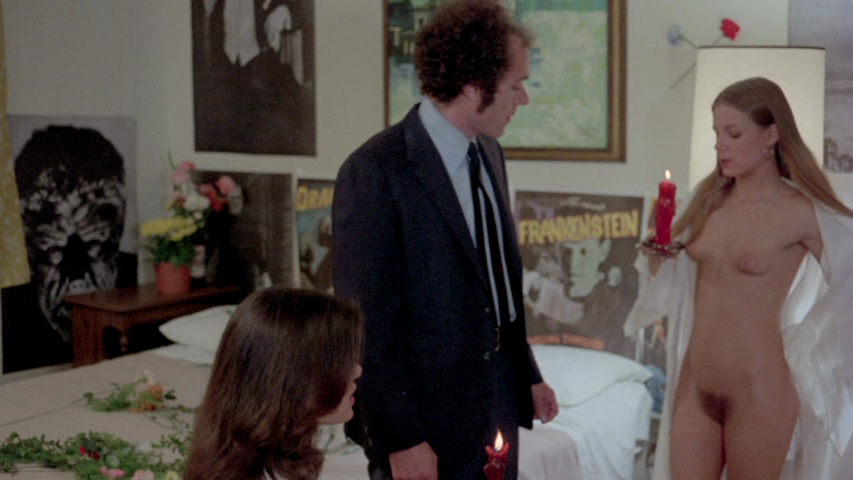 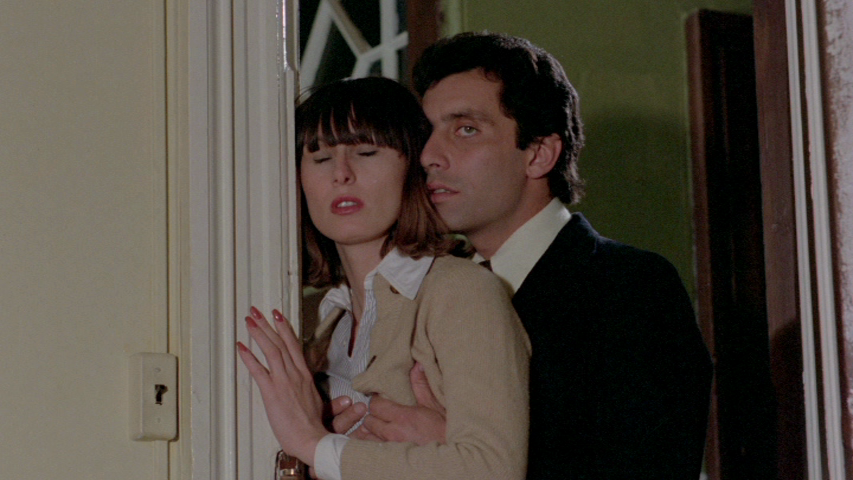 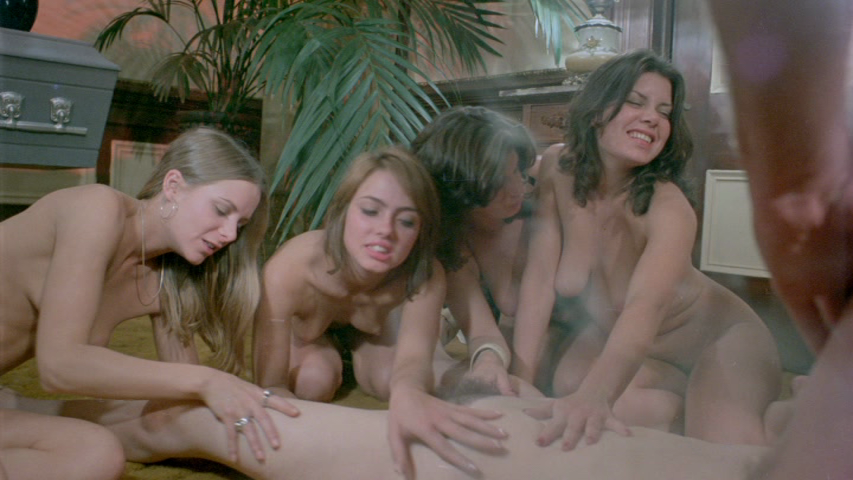 So, now that the one that looked spooky is out of the way, the second feature, HOT LUNCH delivers something completely different.  I have to be honest, I actually enjoyed this film MUCH more than I had any expectation to.  It's got a strange feel to it, but is EXACTLY what I would have expected a porn film, and probably what many others would as well, when you think of the 1970s.  But Hayes brings us to some cool spots, the actors deliver some fantastic dialog AND we get bass player fucking scenes as well. WHILE PLAYING a guitar like a bass. That is badass. I'm not even a bass player, but it's still badass.  STRUM ON, YOU CRAZY DIAMOND. 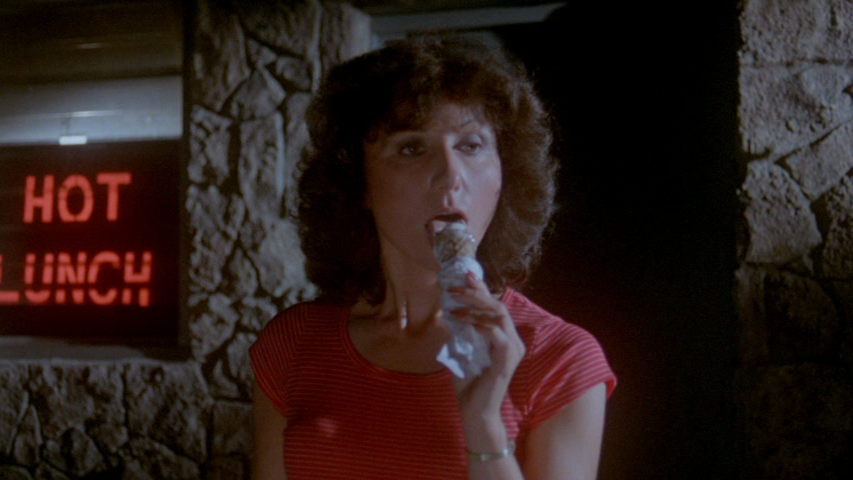 A luckless loser of a dude played by Jon Martin starts working at the Hot Lunch diner, but doesn't have a long run of it, since he ends up cooking a cop's dinner while Sharon Kane (who wears the butch look really well here) and her hooker girlfriend have sex with utensils on the floor beneath him.  Talk about a hard start! 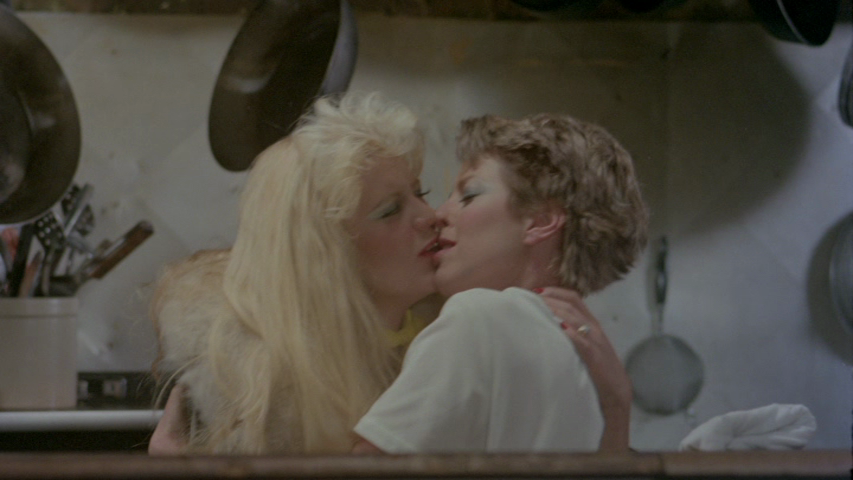 His girlfriend meanwhile, just wants disco dudes and does she ever get some from getting down, going down and riding up and down.  Our hapless hero just can't win. But you can take the bass playing schlong slinger scene to the bank, it's hilarious.  And Martin can't win even at home as she tosses him out because he can't dance and if ya can't dance then you are no friend of mine.  Ah, to fall victim to rejection from a frosted facial full of fury...ouch!! 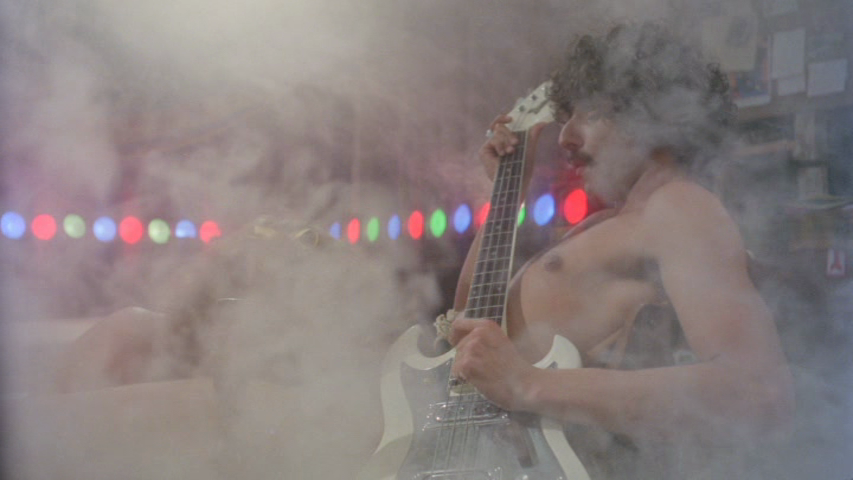 Seriously, told off like this.  "You are gonna pay, and you know why, because your a SCHMUCK!"  I mean, you got 'fro guy, Santa and angry glazed gal all in your grill.  This is a bad day. 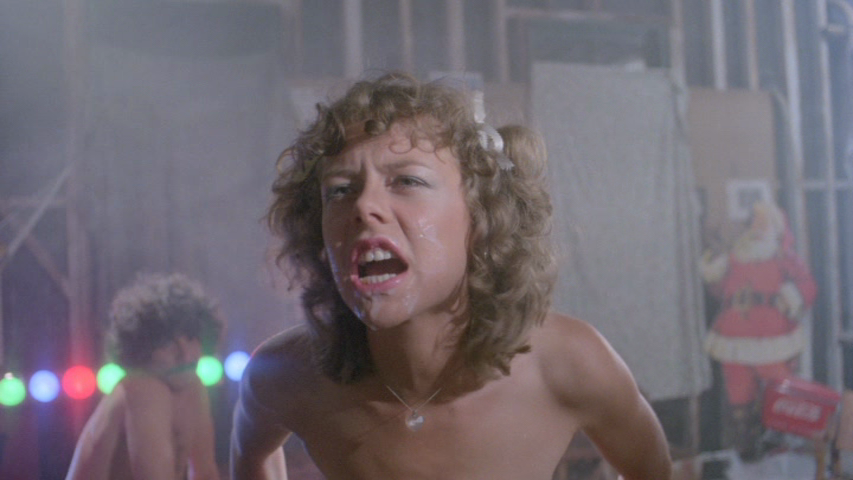 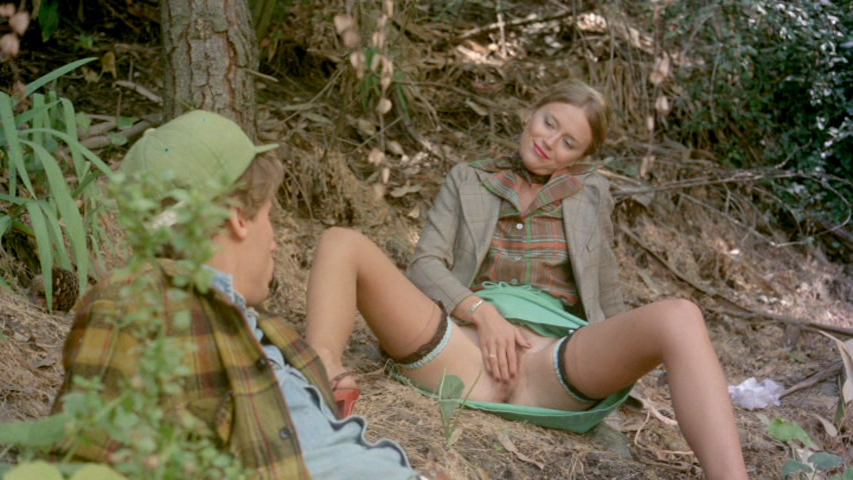 There is more talking and gesturing and screwing in several charming positions and formations to be had from Hot Lunch, and you know that Hayes isn't taking anything too seriously.   We have characters like ditzy Tish and sexy Salome double teaming our man which leads to the best reason to watch Hot Lunch.  You've dug Baby Rosemary, you want to skip to the best part of Hot Lunch to finish out the night... jump to 53:40 or so and while it isn't sex, you need to see this epic confrontation. 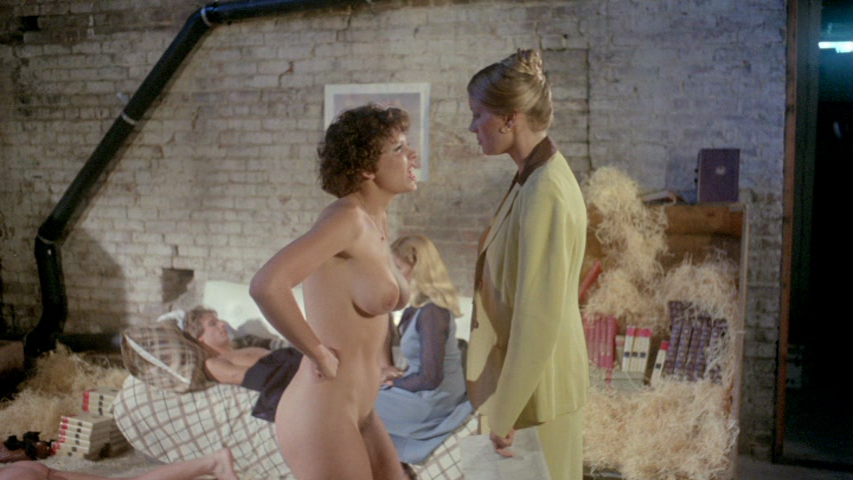 In an endless series of one ups and yo' mama rhythmic line reading we get treats like...

"Don't let these fancy clothes and proper English fool you, I could fuck an arm!"
OH YEAH???
"I've had his thing so far into my cunt it's lucky I didn't get brain damage!!!"
OH YEAH????
"I drank enough of his nut juice to drown a fucking whale!"
Amazing... I'm not sure how you win this round of OH YEAH, but it sure is entertaining.  Don't overlook this HOT LUNCH and remember, this guy can fuck the meat clerk and get the chicken free!!

Another finely presented winner from Vinegar Syndrome scanned from 35mm camera negatives, it looks great, it gives you two VERY different films and for horror fans, gives a glimpse beyond the GRAVE...OF THE VAMPIRE, John Hayes.

A must have it seems to me-guess I better save my pennies...;o)