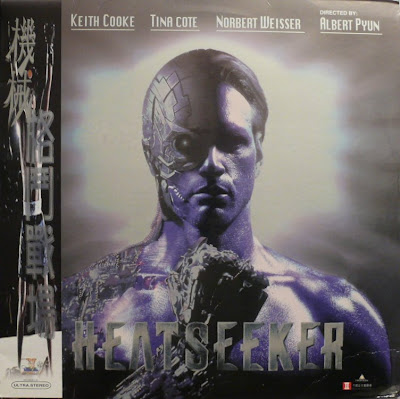 Heatseeker is my favorite cyborg kickboxing tournament film.  Now, that may not be a huge genre, but it should be! Could there be anything better than a bunch of fight scenes, well staged ones at that, which end with head stompings that reveal smooshed up cyberfaces?  Nope? Heatseeker gives you exactly what you want if you are watching it, and as a piece of the Pyuniverse it delivers in spades! 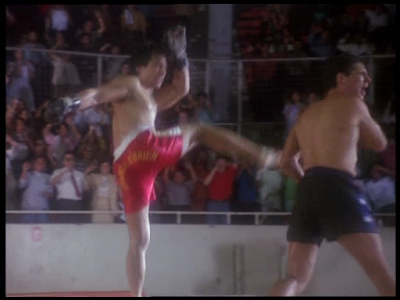 Keith Cooke stars as Chance O'Brien, kickboxing champion.  When we first meet him he is delivering a beat down to Xao, played by the always welcome Gary Daniels-the only guy that could play a Wing Chun practicing CyberFighter that wears white hi-top sneakers!  With his gal pal / trainer Jo (the beautiful Pyun regular Tina Cote) looking on, Chance is on top of the world of ass kickers.  Too bad for him the Sianon Corporation wants to make an example of him in their big Cyborg Enhanced Kickboxing Challenge Of The Century For All The Money In The CyberEnhancedCyborgKickBoxer Market DeathMatch Battle.  The creepy Tsui Tung, played with massive screen devouring presence by Norbert Weisser, puts his life on the line with the even creepier board of directors of his MegaCorp-and that includes a red haired and long fingernailed Tim Thomerson as Fu Man Pyun!  Tung captures Jo, implants her with a chip that makes her passive enough for him to use the Tung Tongue on her-and forces her to work with Xao to not only train him, but show him LOVE!!! 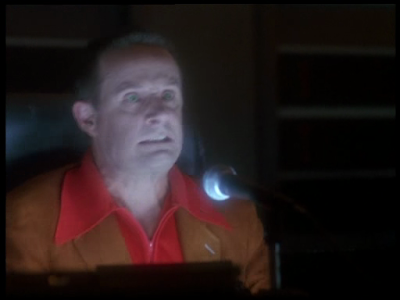 Chance fights, tournament battles of varying awesomeness occur, and Xao rips through his competition as Chance seeks to find his way back to Jo and out of the cyberfisticuffs alive.  Lucky for him, the always cool Thom Matthews is around as a CyberCEO / Fighter working for the bad guys who helps him along.  A fight is about to happen, and we know what it is...who will survive, what percentage will be left of them, and could we get one additional nude scene with Jo?  Well, I'm hopeful... 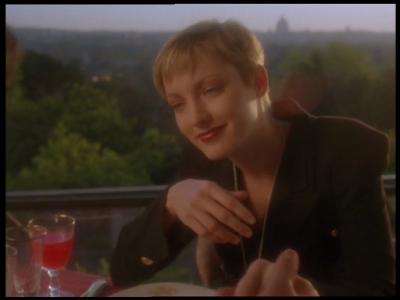 Heatseeker is a fun film in a little sub genre of martial arts that benefits from some really strong fight choreography by Burton Richardson-so if you want low budget ass kicking with a little cybertwist than you should already be satisfied by this film. But for Pyuniversal Soldiers this film is total paydirt!  Every bit as eccentric as an Albert Pyun film should be, it takes that familiar tourney trope and twists it all over the place by adding odd detail upon weird visual in every scene.  Heatseeker isn't looking to revolutionize science fiction fight flicks, but I doubt you'll see another one like it. 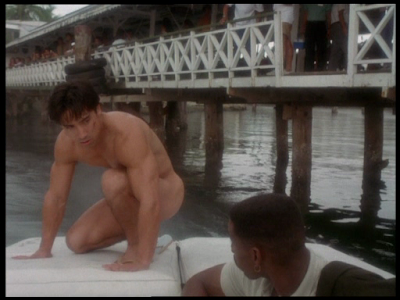 First off, we have the Pyun Players in full effect.  Keith Cooke, who I always associate with China O'Brien (for better or worse) is really game to be earnest at times and then run around naked through the Phillipines at others.  This scene is hysterical as it takes the serious "Will I be able to save my lady love" moment of Dudley Do-Rightism and slings a real bit of what in the Sam Hill are the people on the streets thinking as they cower from the cameras and the naked white guy surrealism. Also, Cooke may not be a master thespian, but he does great cinematic kung fu kicks and facial expressions.  I'm ready for Heatseeker 2 Mr. Pyun...today. Kathy Long and Keith Cooke would make a great pair of Mutated MMA Fighters...but I digress.  Thom Matthews is funny and does all his fight scenes proud-but it isn't his acting or fighting I'll remember, it is his clothes. The guy looks like a giant Kung Fu Christmas Tree in weird suits and strange hypnofashions that you can laugh at, but not in front of Big Brandon!  He'd kick your head to a mess of circuits and pseudoflesh!  I love Tina Cote's look in this film, she has a great face and can rock the short and spiked up hair cut with great aplomb-and manages to keep a mostly straight face as she acts frozen and gets munched like 25 pages of script in one reading by Norbert Weisser. 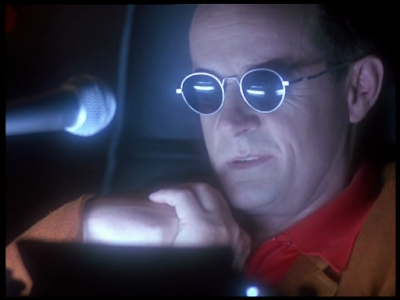 And speaking of the man...Norbert Weisser may have his best scene of all Pyuntime here as he explains that his cyborg friend just needs LOOOOOVE!!!  I'm going to try and get that clip for preservation on the Pyuniverse.  I can't stress it enough-Weisser is great and he puts everything out there in this film.  Watch as he rubs Thom Matthews leg a little bit closer to the epicenter of his chi than was probably in the script...I don't know how anyone works across from him when he is in the zone.  Truly awesome. Norbert Weisser...you are the maximum Pyunamatic Performer! 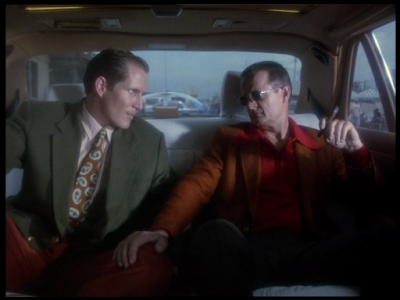 And what the hell...you have to see Tim Thomerson all CyberGothPulpCrazy...yikes. 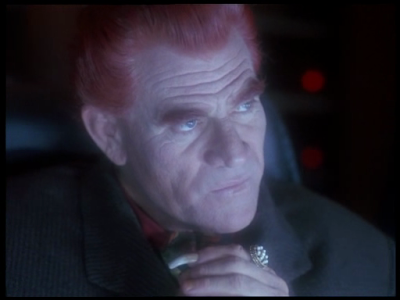 And that brings us to Gary Daniels. He can go either way for me...he does great screen kung fu, but many of his non-HK films don't really use him very well. Not so here, his fights as Xao are excellent, if not a bit brief because he is putting over how powerful the character is.  Maybe less personality and more fist flinging suits him. He was the same way in Fist of the North Star and that turned out great. 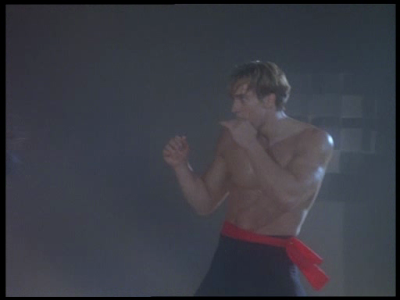 Pyun pulls out the stops, using the weird lighting effects and letting the fight scenes work for themselves without a ton of additional editing.  The man knows Cyborg Kickboxing, sit back and let him drive...  Joined by the boopdadeeboopchakkachakkaPYUNPUMPINchakaboom score by Tony Riparetti-the two are an audio visual Cerebrus (the third head is George Mooradian) and Heatseeker delivers what was expected and as happens in the best corners of the Pyuniverse, much much more for those wearing the proper tuning gear in their teeth!