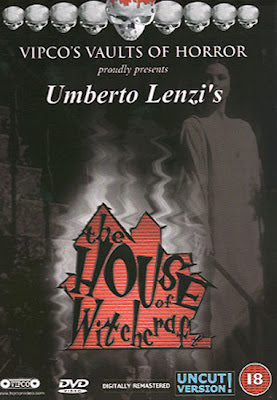 The Le case maledette series (House of Doom) actually got me to join Video Search of Miami.  I barely remember what I got, probably because I couldn't see much of the picture on my 25 dollar VHS that was recorded from an SLP recording off television.  I jumped on these when VIPCO released the discs TEN YEARS AGO as well.  Wow, I'm getting long in the horror tooth.  But this Halloween I decided to bust them out and if you are a fan of late 80s Italian Horror you would be too.  Sure, it isn't the goriest flick ever and it certainly isn't scary, but it mixes in some nice widescreen Lenzi set ups with groovy music, the dubbing you desire AND even a little nudity to lay your head on. 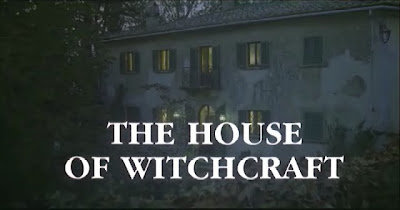 Luke has a problem...he starts the film by dreaming that he is running...running towards a mysterious house...running towards a witch with a cauldron...and she is BOILING HIS HEAD!  After he awakes we join him as he tries to piece together his obviously ailing marriage to the stern and slightly psychotic Martha.  I mean, she reads Tarot cards and screeches away from fatal car accidents that she may or may not have foreseen.
And then they end up at his dream house. Where Paul Muller lives.  FUCKED! 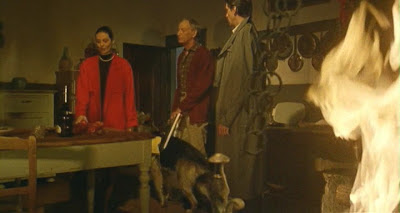 Thankfully Muller has a pretty daughter and some other family to bring to the villa to be victims that get dispatched by the evil dream witch in semi-graphic fashion!  And hey, Luke even decides to jump away from team Witchy Wife (or is she?) and join in team Bang-a-Blonde-Just-Because!  But it ain't what he thinks and sometimes dreams come true! 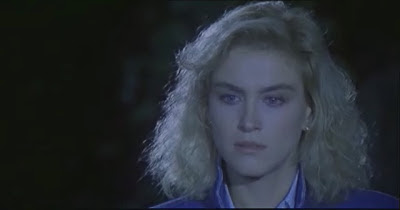 The HOUSE OF DOOM entries are fun enough for fans of late 80s Italian Pasta Peril (alright, maybe not Sweet House of Horrors so much)--and Lenzi and company gave me exactly what I showed up for.  There is some nice widescreen spooky shots of people running about and witches leering before stabbing with savage sneers.  There are more than the expected plot twists to keep the entire thing rolling.  It is dubbed with the same voices that populate many a horror and Tough To Kill styled action film AND it includes a familiar sounding score by Claudio Simonetti that really lifts up the shock show scenario as well.

I was thrilled to see Andy J. Forest from HUNT FOR THE GOLDEN SCORPION as our hero and anything with Paul Muller is fun during his parts. That man gave many of the great Jess Franco moments during his appearances there and I can watch him in any movie. I've proved that, because he was a selling point to pull this one down during Halloween Horrors.

If you like GHOSTS OF SODOM, WITCHERY, BLACK DEMONS, CRAWLERS or GRAVEYARD DISTURBANCE then you'll definitely want to check into the HOUSES OF DOOM with Umberto Lenzi and Lucio Fulci!
Sadly, this one has fallen off the map since VIPCO released it a decade ago...however the entire film is available on YouTube right now.  Dig in!