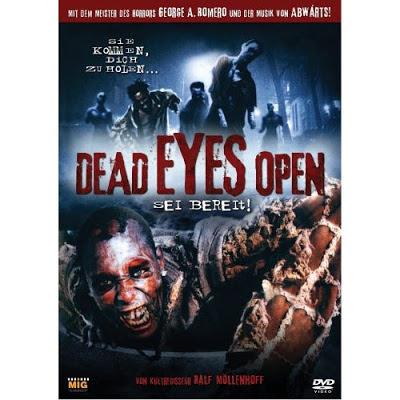 Ah, German zombie films!  I love German splatter from the likes of Schnaas, Rose and Ittenbach, but I have to say that Ralf Mollenhoff probably won't be joining those esteemed ranks any time soon.  Well, they are esteemed around here, and perhaps some of you may think I'm setting the bar low, but DEAD EYES OPEN doesn't even hit the mark of Violent Shit 1 sadly.  However, as most of my readers know, I'm a forgiving guy and I actually found a few nifty things in the short running time of this shot on Super 8 and inexplicably picked up (even by Troma) film.  So, if you hate ultra cheap horror films you can take this as the jumping off point to go to my next HH flick.
Anyone left?  OK then, here we go. 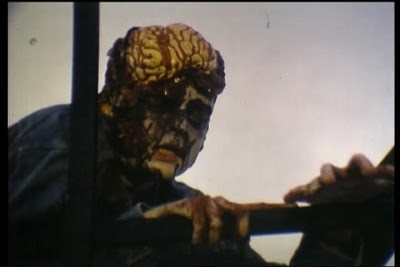 This is your VERY basic "group of people wander around and are picked off by slow Romero style zombies that sometimes do odd things like hang on bridges and dive off when boats slip beneath them. That is one patient freaking zombie!  But I liked that, inventive if completely ridiculous.  And isn't that we we would load this up?  Show me something interesting and I'm a fan.  Sadly, that is about the only bit that was cool.  Check out brain zombie up there...he is a legless paratrooper of the dead!

There is dialog, but you won't care...there are characters doing stuff, but you probably will zone out and wait for the gore.  I have to say this however, Mollenhoff definitely was looking for a "style" here using his Super 8 cameras, and I actually thought some of the editing and processing was nifty in a weird way. It works once in every ten stylistic tries, but that isn't a bad track record all things considered. There isn't much else to recommend.  But wait, there is more to discuss. 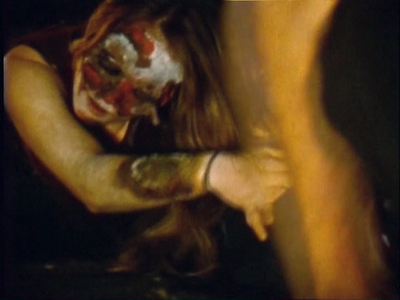 George Romero has one HILARIOUS "cameo" since this looks like a convention appearance that has been downloaded from YouTube and then dubbed into "Sinister German Harbinger of Dread" footage.  AWESOME, I salute you Ralf Mollenhoff!  It is so ridiculous!

Who is this movie for?  The ZOMBIPHILE that must see everything will endure. The German Splatter heads will survive. All others shall fall with good reason before the drab finale--but I made it through and I know many who could.  It tries, but...well...I guess I have to admire the crew behind this for getting world wide distribution for their oddball film! 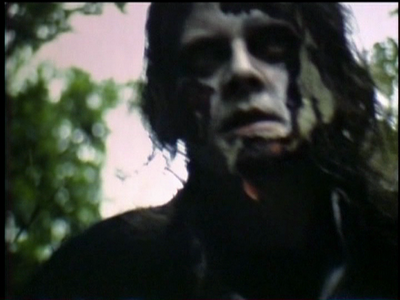 DEAD EYES OPEN is sort of like that one person that goes down on you that wasn't particularly good at what they were working with, but did it a bit different. You'll remember it for a bit, but won't want it again for fear your genitals will end up damaged!
Posted by David A. Zuzelo at Sunday, October 21, 2012

So... your closing statement simply made me want to see this a hundred million times more now.