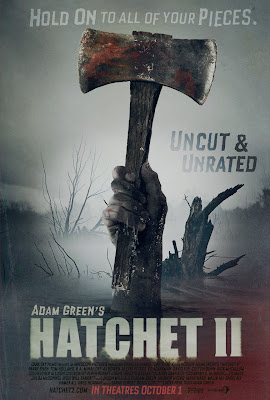 I loved Hatchet.  It was funny and gory and front loaded with Boobs a Poppin'.  What more could you ask for?  A sequel that brings more gore and more boobs and more humor.  Well, Hatchet 2 does that, but I can't say I thought it was as fun as the first.
Picking up from the first film, Marybeth escapes from the monstrous Victor Crowley and finds out that her daddy is involved in the terrible legends birth.  Oh oh.  She heads back to the city to talk to Reverend Zombie again...and now the Rev has a plan to get rid of Crowley and take the swamp for himself.
I don't understand the legality of any of this, but boy...there are some fucking crazy gore scenes that made me forget about how dumb the premise is.
And the saga of Victor Crowley is related in VERY LONG AND DRAWN OUT, yet effective, FASHION. 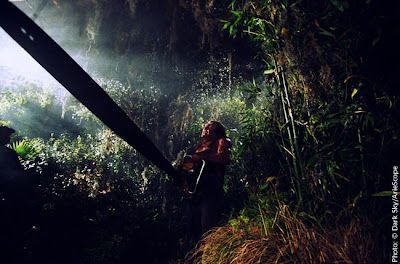 Hatchet 2 isn't really a reviewable flick in my opinion.  It isn't much different from the first, so fans should be satisfied.  It is equal to the original in the gore department, I loved many of the gags (and *chokes*) because they varied from the HOLY SOCKS THAT IS NASTY to HAH...I NEVER THOUGHT OF THAT! type of flesh flinging.  The giant double chainsaw splatter scene is so cool that it deserves to be seen by every horror fan at least once.  So, gore is all good.
The pace is really awkward though, and that is where it falls really short.  The quick start then goes into the back story that features an awesome narration by Tony Todd.  Note, if you need to tell a ghost story, have Tony Todd tell it.  Lesson learned from Hatchet 2.  Don't have Tony Todd talk for an incredibly long time.
Once the film settles in and the Haunted Hunters head into the swamp things fly by. And finally the humor of the first film returns.  I got a kick out of the silent dude (who only mouths "what the fuck" at one point) and have to give the sex scene that contains the line "that's inappropriate" deserves hall of fame status for funny bits in a slasher.  I haven't laughed that hard in a while during a horror film, and then someone gets a swift hatchet in the crotch to punctuate the scene. OUCH.
Tony Todd is always good, and when he faces off with Crowley at the end we see that he is one BIG dude and plays the intimidating guy for a reason most times.  Kane Hodder pulls double duty and is great as well. If this had been 85 minutes and not quite so drawn out I think it would have been the original films equal.  As it stands, this is a great flick to watch when it is on your cable channels and fans of the original may be a little let down, but as a wild wet kiss to slasher fandom, Hatchet 2 strikes the right notes. Maybe a few too many times, but why not?
And Danielle Harris was on my TV for the second time this week in a horror sequel!  I ain't complaining about that at all.  Chromeskull and Hatchet 2 couldn't be more different, but both are fun rides for those that want a bit of horror in their Halloween.

The Woman and I are both big fans of Hatchet, but we found the sequel to be pretty disappointing.

Not only was there just so much taaaaaaalking, but the lead girl's histrionics got real old, real fast. She just caterwauled the whole time.

And for an undead hillbilly swamp-phantom, that guy sure had a lot of powertools that worked after years of disuse. (Hmmm...maybe they were GHOST tools? I would actually like that.)

All in all, the flick lacked all the charm and fun of the original.