So, have you ever had one of those moments when you just say to yourself "what's next in my trash explorations?"  I have them all the time really, and then I realized that I had never really given the later career of Joe D'Amato it's due.  When the films were being imported into the US on VHS (and later DVD), I tried a few of them and found them somewhat intriguing.  You can say what you want about him, but Joe D'Amato was a trashfilm icon for lots of reasons. He could, and would, try anything and succeed at some of it with glee. I see the name Filmirage and I give it a try!

So, I have a bunch of films to look at, and I'll let you know what I find...first up, TARZAN X-SHAME OF JANE. 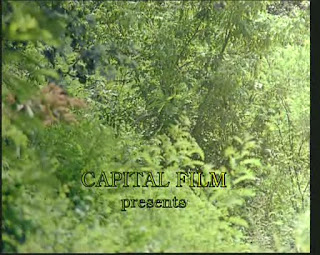 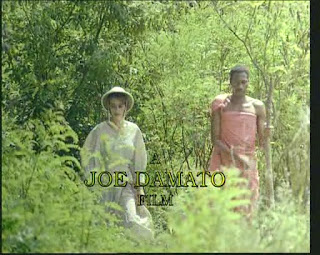 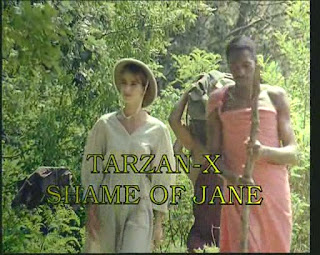 Tarzan-X: Shame of Jane seems to be available in two versions, this full throttle edition in Spanish and a truncated edition as TARZHARD-THE RETURN.  I'd seen it as Tarzan X (Jungle Heat) years ago as well.  The spanish edition features some great dubbing where Tarzan is called HOMBRE MONO (monkey man!!) and our hero is played by Rocco Siffredi.  For those that aren't familiar with Rocco's work, the man has a club of a penis, the face of a movie star and the attitude of one nasty bastard when it comes to his films.  Rocco is rough and while he seems to not do that in every film, that reputation always precedes him (sort of like his dong into a room) and you just never know what is going to happen when he is around.  He actually tries to play his role rather straight here, and gets put through not only the porn paces, but even has a few straight ahead dramatic sequences.  He worries about the jungle. He wonders if banging a few extra "civilized women" will upset Jane.  Hell, he even gets a shave.  But most of all, he gets Jane.
Here is a rather sensitive bit...


But you know, the pair just can't be left to run about the jungle-talking to the monkeys and fucking like it's going out of style. Oh no, Jane is-as the story goes, a lady of means and it's time to take good old Lord G-Spot back to civilization.  But first...


All the civilized world offers Tarzan is uncomfortable dining, three way sex with hot women (can't argue with that) and jealousy with Jane. So...away he goes. Back to nature.  After more sex.  Lots more.


The movie is actually kind of fun, and boy did it ever piss of the Burroughs estate as detailed in this article from the UK paper THE INDEPENDENT.  I doubt they got one penny from D'Amato, but it was probably good advertising and the reason the second, trimmed down TARZHARD edition was created.  The sex, as it goes, is good and the women are beautiful. Special note goes to Rosa Caracciolo, who is Siffredi's real life wife--hubba hubba just doesn't cut it.  If I had to run around in the jungle and pinch my nipples to get laid, I'd do it for her in a second!!
Is it close to Tarzan?  Sort of...kind of...he goes AAAAAAWAHWAHWAHooooooooOOO!  I guess it counts.
Not a bad place to start!  Here are a couple of shots of the softer edition! 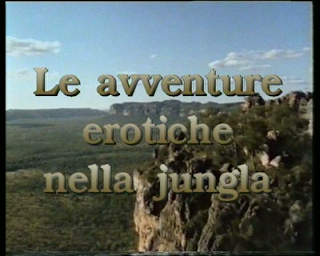 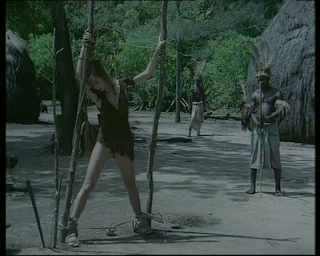 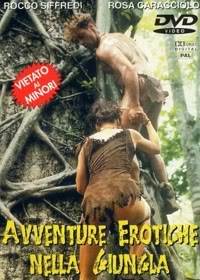 You won't believe where can you find movies like this one here hahha I came across a DVD version of the original film, plus part 2 on a Blockbuster store!!!!!!!!!!!!!!!

Great post David, funnily enough, I've started a Video Nasties series on my blog, which kicked off with D'Amato's Absurd and Antropophagous - and I was thinking that I should track down one or two of his latter day hardcore features - Tarzan seems a good place to start...

That is cool Wes, I love those Anthro flicks. Tarzan is a good one I'd think, there are some gladiator and even a Caligula one as well. It's going to be a lot of fun digging through them!

the DVDs I found on Blockbuster were titled as "Tarzan X" and "El Regreso de Tarzán X 2" they were both dubbed in Spanish, and the cover art was also in Spanish.

Tarzan X is indeed a good place to start, it's standard D'Amato, including stock footage and all!
I've read a great interview with Joe, where he compares his (porn)actors to cattle, calls them dumb, explaines why Rocco is a freak of nature and why all men must swallow 6 eggwhites before any shoot...