I think seeing Fulci's Zombie vs. Shark Showdown in a MICROSOFT commercial is the most awesome thing to happen in years for Eurotrash Cinema fans!  Sure we have been down with Fulci for a long time, but this is just really cool.  Of course, I wonder if Variety was paid...and it isn't like the rights have been a snap have they MEDIA BLASTERS and BLUE UNDERGROUND?
And hey, whose new transfer was ripped for the commercial?

All this Fulci talk puts a big nostalgic grin on my face...way back in 1992 I was lucky enough to meet Chas. Balun at a FantaCon (was that what the show was called) and spent a lot of fun time sharing letters with him.  Since he was the Fulci guru at the time (for many of us)-I really had to work up the nerve to actually submit a little tribute to the Maestro of Splat to Deep Red.  Shockingly, he took it, kindly eviscerated a few drafts as only Chas. could. One day I found a letter where, in his snappy Balunonics, he basically said "Ya fuckin' nailed it...very very red Bro'."
I miss Chas. being with us, and he would have had one very loud opinion of this ad...I'm not sure what it would be, but it would involve CAPITAL LETTERS and at least one cuss word.  Ya have to love Balun.

So, all this made me figure I'd post my piece from Deep Red Alert #2...yep, first published writing in 1992 and I can't say I think it is the best thing I'll ever do, but I have very fond memories of writing it and getting the contributor copy in the mail-the same copy that I still have in my collection.  Yeesh, finding MANHATTAN BABY was a pain in these days, and that was only 18 years ago. Wait...18 years ago?  That is a pretty long time.

Click the images for readable copies and yep...David Quinn.  Ah, there is a story there, but not one that is any more interesting today than it was then...  Also, I think that is still a pretty spiffy title AND Chas really knocked out the title design. 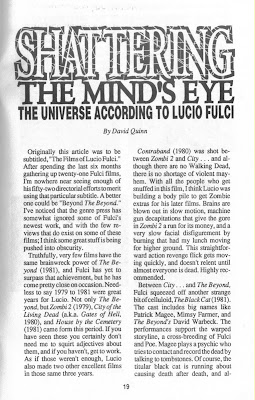 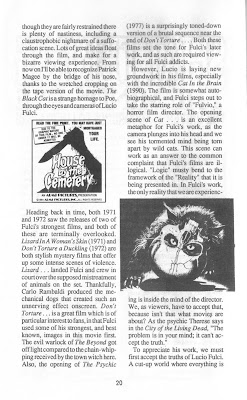 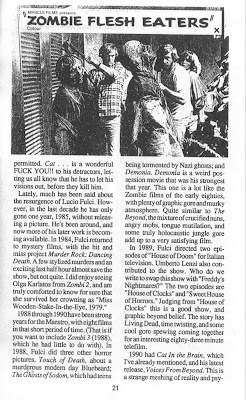 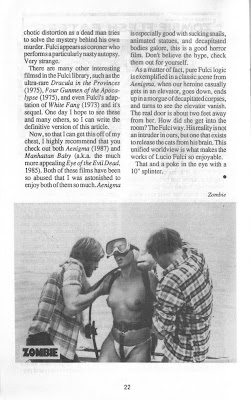 Wonderful David and thanks for posting that original article. I tell you, Lucio is popping up everywhere right now. I was shocked to see the new CITY OF THE LIVING DEAD DVD listed as #4 in this week's Entertainment Weekly's Must See list.

I got so psyched see the zombie/shark fight from Zombie in the Windows 7 commercial. All I had to say was Fulci Represent!