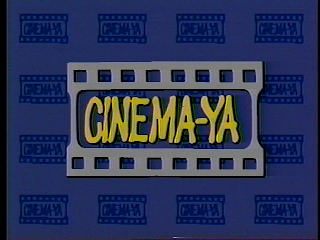 Check out that old video label logo from Japan! Cinema-YA will now be my name for any kung fu movie review I can find.
And to christen my new found YA I bring you this little tidbit from Paul Cooke. Paul is my friend and collaborator on TOUGH TO KILL and it's partner blog at Euroactionmovies. That man also knows his ninja films-certainly he has a huge collection of widescreen Filmark and IFD films that would be tough to match. Me, I'm just jealous that the man rolls so tight with a ninja headband in and squirrel boots that are apocalypse proof. So here is Paul on DEATH CODE NINJA! But first I have to point out this amazing NINJA NOTE. Read it and feel the flavor of Filmark. See you in DEATH VALLEY! 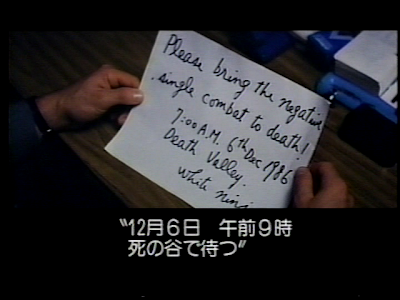 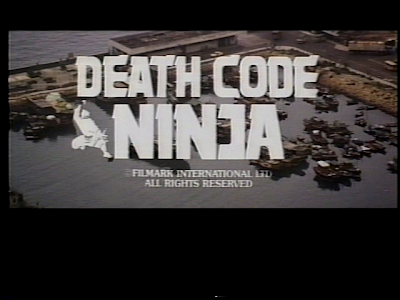 
So you like black clad Ninja types who appear from nowhere usually in a puff of smoke with the stance of Michael Flatley about to perform Riverdance, well prepare to be tap danced across your cerebral cortex like morse code going cold turkey inside your skull.
Only Asian Producer and raconteur antithesis Tomas Tang could inject such infectious deliriousness into a run of the mill Action film, by re-editing and applying state of the art nonsense of his own making so bizarre it actually works. If such movies weren’t so cheaply made and the original makers had the money , surely by now Tang would himself have been Ninjitsued! Forget your regular dose of black clad Ninja Fun as this one includes both yellow and white as well, and just like dipping into your candy bag of Smarties you never know when your favourite may appear.
The plot has all the surprise elements of a crowd sneezing into a wind that suddenly changes direction on you , slapping right back in your face like a mixture of mass may-phlegm. The CIA trade off with a Triad leader a case of money in exchange for one containing blueprints for the Asian Star Wars Strategy Map. The lead agent also takes photographs of the plans before he and his men speed off in two directions with the important information. What follows is a free for all as multi interested parties set about getting hold of the documentation for their own purposes , and all the unravelling silliness a ‘B’ movie loving film fan could wish for. This mirth making Ninja zaniness spins your head and tickles across your rib cage like a member of the banana splits playing a xylophone with a feather. Prepare to laugh out loud as CIA group one have their escape car crashed by an appearing group of Ninja , the impact sending a wire propelled human form crash dummy out through the windscreen like a witless renegade from a Harold Lloyd escapade. Funniest of all is that he gets up , dusts himself down and with nary a Wonder Woman enveloping twirl leaps into action as our intrepid white clad hero Ninja. No confusion over good and evil here as the struggle to lay claim to the briefcase leads to an ensuing display of kicking , punching and lots of leaping and rolling about Ninja style. Our American agent acronym is up against the odds here so cleverly employs subterfuge , allowing for time to heal his injuries and live to fight another day.
The brief case entrusted second group are set upon by a lethal gang of two revealed with an equivalent crack of thunder and flash of lightening as the Killer Couple !. This deadly duo of professional hired help are a male and female black leather clad combo of karate from the Philippines , highly skilled in gun and swordplay. Also armed with the lethal art of dubious dubbing as the female known as Joan says to her partner Patrick after their task is complete , ‘You must promise it’s the last time , after we’re married you’ll never do it again !’ , with the reply , ‘I promise you Joan’. The out of synch dialogue is a huge part of the movies infectious appeal along with the out of pace dubbed steps , rivalled only perhaps by the groovy synthesized score running throughout. At heart Patrick and Joan have an ethics code of honour that sets them apart , this is just business to them amongst various levels of unethical people. The powerful mob of the Triad organisation will not let them walk away though and they are targeted for elimination. What follows are episodes of attempts on their lives by hired thugs who prove to be no match for the Killer Couples fighting skills as shown to bruising and bloody effect. Unable to kill them the Triad boss implicates Patrick to past gang related criminal activities , and the Hong Kong police authorities arrest and incarcerate him on the evidence given. 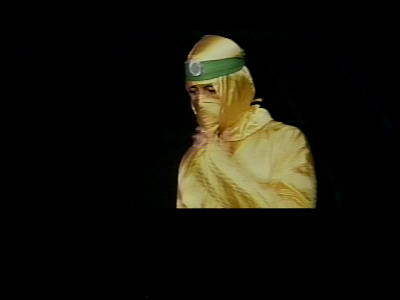 Time for the KGB to show up and throw their Soviet caps into the fray as they seek to muscle in on the Action. The Triad gang leader is finding the Asian Star Wars Strategy Map to be a warm Wookie and certainly does not want the Soviet Force to be with him , so enter the Yellow Ninja to take them out of the picture. Much martial arts mayhem follows as the sartorial Sifu shows his array of weaponry wares , with a name taking challenge far greater than the artist formerly known as Prince. This reign isn’t purple its down right Russian red as with fast flowing Fu we see his super powers takes out theirs.
Like a mini cinematic intermission thrown in ala the ‘ Kentucky Fried Movie ’ , and just as finger kickin’ good , no sooner sentenced than reprieved is Patrick back with Joan and a now introduced pre-teen son!?. The Triad head bounty is still in effect less we forget and no sooner are they reunited than their son is kidnapped , taken from them in what may be the greatest form of unmistakable product placement ever witnessed on screen. In a true rewind moment of incredulous raucousness you will be staggered at the mesmerizing appearance of skulking abductor pouring a solution into a handkerchief from a bottle , that just to avoid any confusion amongst audience members the camera pans right in close upon to reveal a handwritten label in big letters spelling out the word CHLOROFORM !. Equally as funny is the discussion that takes place immediately upon discovering a note from those responsible ( quirkily endorsed from The 3 Magnificents ) as Joan reveals their son Jimmy to be a diabetic , Patrick responds in a puzzled manner with the beverage choking slice of dubbed translation ‘I Forgot about that’ ! Clearly not the sort of pop you want to send in an application form for to go one on one against Anne Robinson on The Weakest Link show.
Patrick goes ballistic and sets off on a one man rescue mission which serves up some savage Action , with Triad knife wielding members attacking him in a very neat scene played out in the home of the big bad boss. His battle is against overwhelming odds and when news of her husband and sons fate reaches Joan she too is drawn back into the fight for justice and freedom. The sight of her re-donning the black leather wear is an Action fans crack and a fetish freaks slurpy , as this female cauldron of chaos bubbles on over to her dark side as she harnesses all her hatred into weening out the low life. Laying claim to a list of Triad top dogs once held by her husband Patrick , as his families form of life protection policy , she becomes armed and dangerous on a mission of vengeance. Look out for an interesting game of chance involving the throw of a dice that literally turns into a defiant slice and dice moment as Joan rolls in to take her chances with the Triad organisation itself.
‘Death Code Ninja’ is a low budget , high Fun , Action movie , Video shelf hunting fanatics find of the decade. The audacious attitude of the entirety doesn’t even come up short at the end as we are treated to a Big Fun reworking take on the classic mirror room ending to ‘ Enter The Dragon ’. A tongue in cheek salivation of satisfaction smacks its way into your system with each punch and kick landed in the body breaking full on Fu fight. 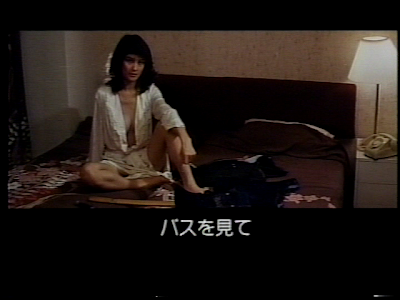 Hey , hang right on in there though less we forget that this is a Ninja titled outing and mind numbingly best of all it’s a Tomas Tang Production , as with all true Tang temerity Re-Enter The White Ninja! It’s the endogenous epilogue to end all as the CIA agent is back fully fighting fit , even having had time to put the garments through the wash with a finishing light spin dry for that extra bit of bounce. It’s crowd pleasing time as Yellow Ninja faces off against White Ninja , squaring up to each other in a quarry overlooking Hong Kong harbour. The final installment of non related inserted madcap mayhem ensues , serving up equal measure of hand to hand combat and aggressive assault with swords , chains , lethal throwing stars , hand held crossbows to bow and exploding tipped arrows. Holy Ninja Napalm Batman is this the Joker amongst a wild pack of trashy treats!?
Just one 'Death Code Ninja' moment though , whatever was the purpose behind the Asian Star Wars Strategy Map!?. Who Knows? , who cares!?. Maybe all will be revealed in the not too distant future - hopefully not far , far away. In a sequel doubtlessly dubbed , ‘ The Tomas Tang Empire Strikes Back ’ 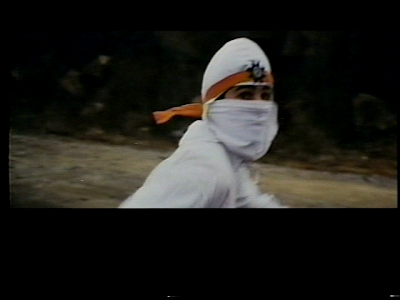 Sounds wonderful,I'm hunting down a copy.