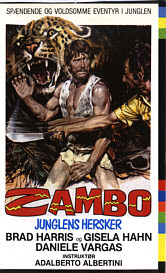 Of late I have been on a Eurospy kick, and I've been enjoying all the KOMMISSAR X films that I can score. Brad Harris-whom I usually think of in regards to Peplum films and rather poor dancing in King Of Kong Island-has become a bit of a project these days. He was in a ton of really oddball flicks and provides a nice link up through the back alleys of the early 70's Eurotrash Cinema. But when I accidently stumbled over a clip of something called ZAMBO-il dominatore della foresta-I knew I had to find it. A quick email to Craig Ledbetter of EuroTrash Cinema fame and I was on my way. You can reach Craig easily and ask the man for almost anything. He probably has it. Heck, in the case of ZAMBO he had not one, but TWO versions-including a fully letterboxed print from Venezuela! Craig is not only a gent, but a true scholar of Eurotrash-visit Eurotrash Cinema today and remember, if you don't see a title, ask! 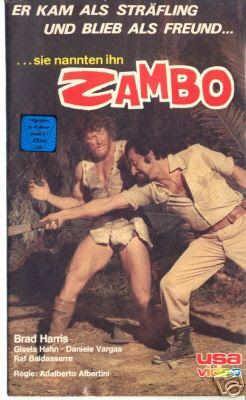 So, how was ZAMBO? What was ZAMBO?? At the bottom of the post is a clip I found on You Tube that had me ready for a full blast Jungle adventure, and while ZAMBO certainly is that, I was surprised to find it was a little more than a complete rip off of Tarzan. Actually, this reminded me more of The Phantom than the Billy Zane film. 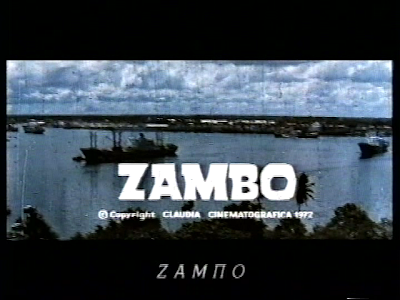 When we first meet ZAMBO, he isn't quite the Jungle Action Hero I expected. Nope, instead we meet George-a man headed for the gallows. A few trippydelic sequences of a trial show us that he is an innocent man betrayed by a woman and set up for a fall. Well, a short fall with a short rope attached to his big thick neck! As he takes the last train to deadsville he meets up with another prisoner who urges him to escape. The two make a leap and head out into the jungle.
For nearly 30 minutes they go about the business of surviving in the wild. 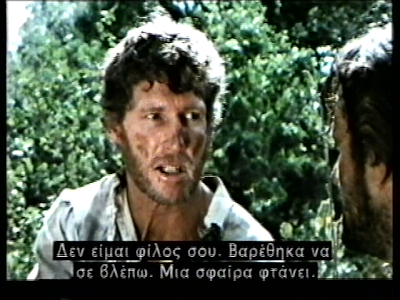 Well, it doesn't work out after George's pal decides that in a moment of hunger he should eat a poisoned plant. Woops! He gasps and moans while Brad Harris unleashes the fury of Samson...ur...ZAMBO and shakes trees to find coconuts and the like. And then he dies. This changes our hero as he realizes this man was his friend and the civilized world holds no more charm. So, he sets out to make his way...and offscreen he becomes ZAMBO! 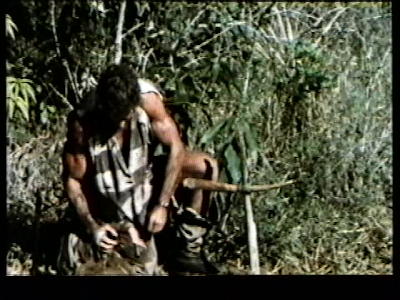 But no jungle lord is complete without things to fight against. Slavers are taking advantage of the natives, and ZAMBO rescues them using his huge muscles! He has a kid sidekick! And as the rest of the plot unspools we have a crew going into the wild to find the usual mysterious jungle location. And they realize they need ZAMBO to help them. And help he does, even fending off a Gorilla with his bare hands. But we know this can not go well as one particularly cut throat fella (played by Raf Baldassarre) has infiltrated a nice researcher and his daughters party. His task is to bring in the legendary hero of the wild dead or alive. Slavers and scumbags certainly don't like this rather lunky Ghost Who Walks! 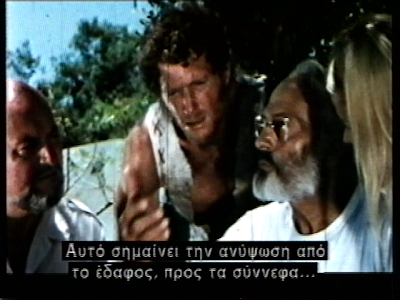 After lots of carrying on and corny dialog, they actually succeed in finding a hidden temple that contains...well, something! And all it really does is lock in the happy researcher...but ZAMBO will come to the rescue. Along the way he gets to torment Baldassarre, throw some spears and court the beautiful Gisela Hahn. There is more, but as obscure cult films go, I highly recommend you seek this one out and find out for yourself how it all ends! 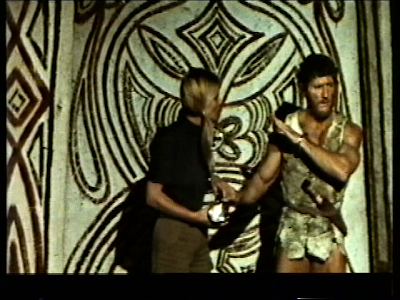 Zambo is a prime bit of fun that is odd in keeping a lot of exploitation elements out of the film and making it more like a nice throwback to pulp mags and serials. Director Bitto Albertini is quickly becoming another project-I found myself popping in THREE GIANTS FOR ROME to find his name, as well as Brad Harris', staring at me. He brings a sense of adventure to the films that can't be denied-and though you may never hear him mentioned with any of the big names in Eurotrash Cinema, I think you'll be hearing more from me. Heck, the guy made GOLDFACE-THE FANTASTIC SUPERMAN! I'm all about Goldface. So, sleaze fans may not get the fix they need, but if you want to have a jungle fun rootin' tootin' good time, give ZAMBO a whirl. 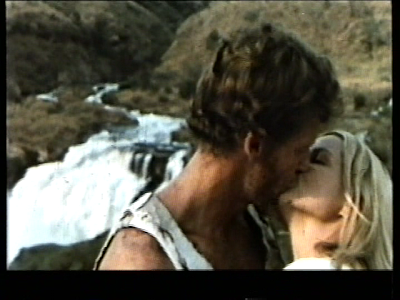 The screen caps above are from the Greek VHS edition, though if you ask Craig you can get a fully letterboxed version. The Greek edition contains better color and stability, but the image is completely destroyed in parts due to some very very awkward framing. I could swear I saw some other subs popping up at the bottom of the matte on the Greek tape, so it is probably blocked off to remove those from the print. 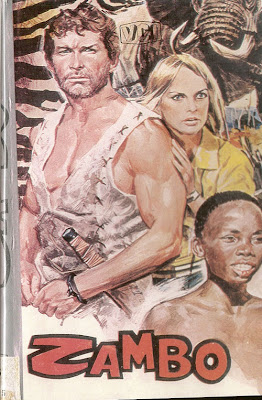 What do you use to get frame grabs for your posts? I'm ignorant.

These are taken with VLC, you can get it free. Just search for VLC PLAYER online. I'm also a big fan of the GOM PLAYER.

I too appreciate Craig's site and product quality. Thanks for the rec of Zambo. I would never have found it on my own. I am getting into a Harris kick at the moment. Any other recommendations for the quirky?

Glad to help..I sure do enjoy Zambo.
For Brad Harris you can't go wrong with the Kommissar X films of course. Craig hooked me up with Three Giants Of The Roman Empire and I really liked that one. Also, Brad dancing in King Of Kong Island is hilarious, and the movie is a wacked out riot.

His appearance in Challenge Of The Tiger/Gymkata Killer is great also.
Hope those help...VIVA BRAD!

Great great cribb!
really happy to see a bit of zambo!
I am tracking this movie for years here in france.Very few copies around...visit my youtube channel, we obviously got the same taste in cinema!
http://www.youtube.com/user/baskee1

just saw the movie finally.
Awesome monkey man attack and so many good lines!The old fool delirium who got to many sun rays in the face is simply wonderfull.