Lucker The Necrophagous on DVD at last!! 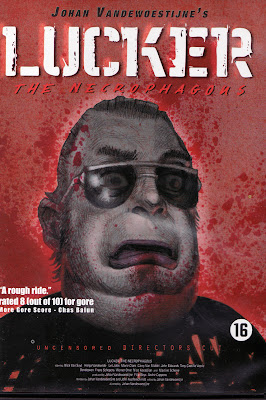 Uncut, uncensored and more outrageous than ever, LUCKER THE NECROPHAGOUS has finally come out on DVD in the new director's cut! Not only that, but it has a documentary about the film and the original version. After poking through the film I can say that this is by far the best looking version the film has seen-be it in the new version or even the original. A full review will follow in the next post (this is a lot of viewing)...but a few things Lucker related could tide you over. Below is the cover and specs for the disc-and a handy ordering link from Xploited Cinema. Also, you can check out not one, not two, but THREE items of interest to fans of this Belgian gorefest. First is a little history I wrote for Cinema Nocturna a few years ago entitled EVOLUTION OF A CELLULOID MANIAC. Then you can check out an interview with Johan Vandewoestijne regarding Lucker, the director's cut and other fun items that include working on a Paul Naschy film by going here.

I also worked with Johan on the remake screenplay, and though that is still under wraps, you can check out the aborted comic book by reading the script to the first issue here. Not exactly an adaptation of the screenplay, but more my solo spin on it.

So, more shortly on this entire disc, but in brief...if you like splatter movies of the 80's, this one is for you. If you like Lucker then you NEED this disc. The gore is amped up and you won't believe it. The film had a reputation for nastiness, and that was just the cut print. Dig in. 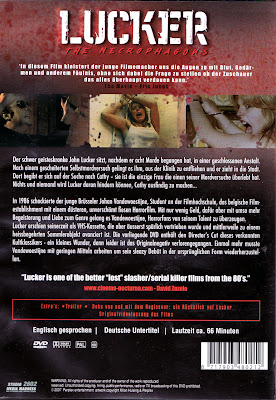 DVD FEATURES
Posted by David A. Zuzelo at Wednesday, December 19, 2007

Interesting that you also know Mr. Desert ;)
This DVD took a long time before hitting the market. Personally I thought the film was rather lame and lacking suspense. The only reason it got so infamous was the fact that it dealt with necrophilia - yet I think there wasn't enough gory stuff in it for the true gorehound. Maybe this new version will satisfy them.
(Not sure how it will hold up against Nekromantik 1 + 2 and Schramm for example.)

Indeed it is easier to spell DESERT than (lets see if I can do it from memory) VANDEWOESTINJE :)
Lucker is pretty much a movie where you get what you get. It is a nasty little splatter movie about a necrophiliac maniac. The additions in the directors cut certainly shows a bit more severe side to Lucker and his antics. I'll be interested to see what you think of it.

Hello David, is there any chance to contact Johan for example via e-mail?