Thriller - A Cruel Picture / They Call Her One Eye Archive 10

10 posts into our Thriller-A Cruel Picture archiving and time for a little break. To read all of these posts you can use this handy dandy link... THRILLER-A CRUEL ARCHIVE.
I'll be using a week to blog on some other stuff, some books, some links, some movies... the stuff I like. But it WILL be back. Next up are more photos (quite a revealing bunch) and more documents of interest. I'll be compiling and publishing the material I had started up on the Vibenius book project before scrapping the idea and also trying to solve the second biggest mystery of the Chrome DVD experience for me. I think you'll get a kick out of it... THE DARK SIDE of the industry indeed.

So, to top off the first series, here are my liner notes for the Synapse VENGEANCE edition of Thriller/They Call Her One Eye. I wouldn't recommend this DVD to anyone reading since it is cut, so here are these notes. The companion to these are on the Sex And Fury dvd from Panik House. A little tribute to Bo Arne Vibenius... 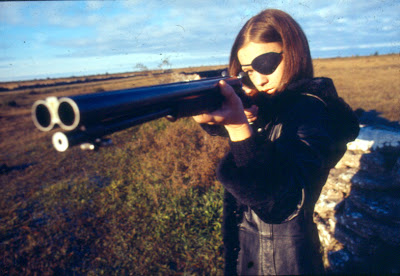 THRILLER – A CRUEL PICTURE is one of the best examples of a truly independent film. Spit directly out of the mind of its producer and director, Bo Arne Vibenius of , and forged with any and every tool he could muster with his own production company, it’s a constant slap in the face to the viewer. Using only a few actors and a giant wad of relentless self-motivation, Vibenius completed what would become one of the most enigmatic gems of exploitation cinema. After what he felt was a bad decision in the long run, he sold the film, which was promptly slapped with a lurid English release title and sent worldwide in various cuts and edits. You can now experience the movie and enjoy all of the work that went into its creation with this DVD, a release we believe to be a worthy representation of this amazing film. No more fuzzy bootlegs for this film, ever again! But where did THRILLER – A CRUEL PICTURE go since its creation? The relentlessly dark vision and D.I.Y. drive of a director out to make his ultimate commercial film tells the story, one that lies behind the scenes…

The Strange Case of Bo Arne Vibenius a.k.a. Alex Fridolinski

A one-time tank squadron leader who would later become a banned by Swedish Censorship artist, Bo Arne Vibenius was captivated by film at an early age. When he was accepted into the he could not have been happier at his good fortune. He intended to take every opportunity that he could make for himself, networking and doing anything he could to succeed. Things moved quickly as he began working with what many consider THE Swedish film making icon, Ingmar Bergman, on both PERSONA and HOUR OF THE WOLF. Vibenius’ career looked quite promising indeed...until he struck out on his own to make a very bizarre and obscure children's film entitled HUR MARIE TRAFFADE FREDRIK, which was released to Sweden alone in 1969. With its style that could only be called unique, Hur Marie... is a recounting of two children's strange travels through a fantasy world of their own making, while speeding about on a go-kart. Chased by the police and engaging in Old West gunfights that involve shooting other children's clothing off (??!) it certainly is unique. Sadly, the market wasn't quite ready for Vibenius' vision (and possibly still isn’t) and the film sunk him financially as it was produced by his own BAV Film Company.

Now responsible for his family and no longer content to work on the visions of other artists, he decided to create his own fate. Working at an advertising agency that handled the SAAB Company as the head of film he took a loan out against 3 months overtime and made the decision that brings us here. He decided to make what the mind of Bo Arne Vibenius only envisioned as "the most commercial film ever!"
While it may seem Bo Arne never truly got a handle on what "commercial" means, what came of this work was far better than any simple bit of product. THRILLER – A CRUEL PICTURE was the name, and it lived up to its promise. After the film was finished it was more daunting a task to then distribute it and reap the rewards than he could have imagined.
To quote the man from his own story...
"The picture which You are about to screen-Thriller-A Cruel Picture-was written in 3 days and nights (those were the days before computers) on an old typing machine. My fingers were actually bleeding after those 3 days OF NOT ONLY MENTAL BUT ALSO PHYSICAL FINGER WORK."

That says it all.

Thriller is a simple tale. Torment plus violence equals up to fierce revenge. Enhanced by Bo Arne's distinct and obvious flair for production value coupled with an inherent artistic ability to communicate his exact vision from brain to film, Thriller oozes off the screen, raw and tough as a two-dollar steak. Just like the man behind the film. Genuine and possessed with making his ULTIMATE picture, no shortage of funds or hardship could stand in the way either in Vibenius’ reality nor in the slow motion deathscapes of Christina Lindberg’s revenge.
Shooting in and the picturesque area at a furious pace, Vibenius used the talents of his friend Ralph Lundsten to create the reverberating sound mix and throbbing music as well as casting Christina Lindberg and Heinz Hopf to form the core of the film. The 11-person crew prepared to shoot, edit, score and mix the film quickly and with the utmost efficiency. Bo Arne used his previous military connections and secured specialized cameras to film the unique slow motion sequences. These cameras were employed by the military for capturing images at 500 frames per second, as opposed to the standard 24, primarily used for rocket tests. Unfortunately, the processing lab promptly destroyed two full days worth of this material because they didn’t understand what was required to process it correctly, forcing a re-shoot. The remaining pieces of this original fight sequence, which is very different from anything else in the film, are presented on the DVD for the first time anywhere.
From October 7th to December 23rd, 1972, THRILLER – A CRUEL PICTURE was Bo Arne Vibenius' life and sustenance. Completion was handled with more hard work and most certainly long hours.

And then the Swedish censors banned the film outright on April 4th, 1973. The “most commercial film ever” would never see a commercial run in its home country uncut it seemed. Undaunted, Bo Arne and his little crew packed off to the prestigious Cannes Festival in May 1973. Using one of the first available VCRs, he packed his film up and brought it to town for all to see. He wanted to create a stir in as his financial and artistic future as well as his sanity I dare say, were all riding on this festival. Bo Arne brought EVERY eye patch he could afford with him- placing a sticker on them mentioning the films availability for distribution.

However, Bo Arne's film was still having a trouble finding an audience. One morning at 7:30 A.M. two men from legendary drive-in distribution firm AIP (American International Pictures) walked into the screening room, watched the movie and bought it straight away. Sadly, AIP choose to severely edit the film taking away much of it’s impact. This DVD edition restores those edits for you to enjoy. Released as THEY CALL HER ONE EYE and later on a double bill with the Pete Walker film THE PHOTOGRAPHER’S MODELS (a.k.a. HOUSE OF WHIPCORD) as HOOKER’S REVENGE, the film did VERY well and was in Variety ranked above many now classic features. However, THEY CALL HER ONE EYE just wasn't Bo Arne's movie anymore. From the violation of Madeline (now called Frigga for some reason, you can hear this on the English audio dub track on the DVD) Thriller turned into the violation of Vibenius! His artistic pride was hurt, and to add salt to his wounds he had the knowledge that he wouldn't benefit from the success of this bastardized child either.

THRILLER – A CRUEL PICTURE was sinking into obscurity… though it certainly does have some fans that never forgot it. These include Norman J. Warren whom I would like to thank for his early support of this project and Quentin Tarantino who paid homage to the Lindberg character in KILL BILL. But they weren’t there for Bo Arne as he pulled together funds for another film. This one would vent all the rage and pain that went into Thriller's creation and subsequent displacement. After a financial backer left this new production Bo Arne found himself back in front of that same typing machine… and several bleeding fingers later he slashed out a nasty bit of business called Breaking Point. A dark and distressing film that again left Bo banned by Swedish Censorship!

After these films were completed and banned, Bo Arne worked hard as a production manager, including the great Bo Widerberg film MANNEN på TAKET (MAN ON THE ROOF), and now runs Channel One in , producing commercials. His living room proudly features his Golden Lions from for his commercials. For a man the world will remember for a certain One Eyed prostitute reaping her vengeance across the silver screen, I hope to see at least one more award for him.

Also, sitting in Bo Arne's mind is the script for THRILLER 2...

Looking back at his work and what went into it, I would call Bo Arne Vibenius a dreamer whose visions are available for all to see. Honest work and honest films are his stock in trade. However, those dreams and visions may be too daunting for many viewers. These films stand firmly as the work of a man that has many facets, and expresses his darkest side in moving images.
Besides that, he serves a good beer and salmon lunch.

We hope you enjoy the show as this DVD fills one more gap in the great DVD releases in cult cinema history. Hell, put it next to your restored of … that was probably easier to arrange. A true classic from an artist who deserves every bit of praise that we hope he gets in the coming days after you read this. They don’t call it One Eye anymore, it’s THRILLER – A CRUEL PICTURE and it is here to stay.

Text copyright David Zuzelo, all Images are copyright Channel One and are used for promotional purposes.

Thanks for putting on this tribute to such an amazing film. I just found this link through Kimberly at Cinebeats and have added a link for you over at my blog. Really fantastic posts and photos...thanks for putting all this together.