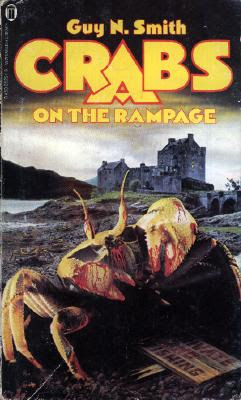 The Crabs and their giant cutlery claws skitter on in the second (of three) installments of CRUSTACEAN DOMINATION (also called a far less than scholarly take on six fine novels that deal with the important man and sea dweller relationship).
With this entry we reach the apex of the series, one of the most entertaining nature running amok novels I've ever encountered... CRABS ON THE RAMPAGE (1981). Just say that title out loud when nobody is listening. See? It makes you smile doesn't it? It does. Ahead lie some big spoilers, so I'm warning you right now. Before I look at the book though, I have to stress that this one is not only the most fun in the series, but it really benefits from reading the previous three entries first. Rampage ties them all together neatly, and even manages to take my second favorite character of all the books and give him a surprisingly good epilogue. So, no matter how exciting this one sounds, I can't stress enough that you'll get more from it if you go in order. But if you can't resist trying one, this should satisfy as well.

"The big one came first, a waving pincer checking the others. This was human--regal meat!"
"And now the hour of vengeance was nigh. For the big one told them so!"

Who knew that crabs could use the word "nigh?" Amazing!!
So, what we have in Crabs On The Rampage is the most violent entry into the series, but Smith is no longer content to simply tri-sect his human victims. He isn't even content to let them hurl tanks about anymore! Nope, they need to invade London! But Smith also needs a motive for our clickity-clickers, and he finds it by giving them a killer cancer that is simply causing them to drop dead. No crab will go down without a fight, so our man Cliff Davenport is called back to action by Old Grizzly Grisedale. They can't poison the crabs for fear of destroying the populated areas they are targeting, so it is battle upon battle as not just single victims of their own stupidity get dropped, but scores of folks going plopping into the ocean to make a bloody Crab Chowder as the beasts go for the bigger targets such as bridges. We return to Shell Island, we battle at Barmouth and it all comes to a screaming conclusion that features the de-clawing of one of our human friends. What irony eh? Cliff gets a little more crabby as a parting shot from the nemesis of his family.
But Smith doesn't simply focus on the large scale mayhem thankfully, I am always impressed by his ability to draw up characters in a short time that actually make you at least understand them before they end up getting killed. While my favorite scene of this kind remains the "human joint of meat cooking in a makeshift oven" in Thirst, ...Rampage contains a stunning chapter about a real prick of a dad who just won't relent until his son goes fishing with him. It does not go well at all, but Smith has created the characters, with all their flaws for better or worse, so clearly that when panic and unavoidable death strike it really makes an impact on the reader. One really clever use of a characters Crab-O-Phobia is so well done that it becomes both memorable and hysterical at the same time. I never thought I'd read a story that had a deputy sheriff plagued by nightmares of monster crabs mentally screaming the line "Let it suffer-fuck the Protection Of Animals Act Of 1911!"
Nope, never thought I'd read that.
This is the kind of book that tells me I've chosen the correct path to entertaining and enlightenment...the Guy N. Smith way. It isn't anything more than a spectacular monster tale splattered with over the top gore and loaded with characters that are memorable even if they do end up chomped down within 15 pages. It is funny, it is fun and I love it.
Besides, just say CRABS ON THE RAMPAGE out loud one more time.
Feel yer face...

That is a smile!

Next up, I'll tackle the final two books, Crabs Moon and the hard to find, but utterly unique in the series... CRABS-THE HUMAN SACRIFICE! Now if you'll excuse me, I need to go write another letter to Santa for Crabs Fury...
Posted by David A. Zuzelo at Thursday, March 22, 2007

Your blog automatically becomes the best blog ever with Guy N Smith entries.
In fact I had been tinkering around with the thought of starting a Doomsday novel blog (because... I have time) and I was wielding this cover like a mighty crab claw.

So awesome. Thanks for blessing the internet with these entries.