2007 is the year of my Guy N. Smith vision quest. I don't know what started me on this path, but I've been running along nicely, reading a GNS book between each other title I decide upon. I've met THE SLIME BEAST. Felt THE THIRST (and it's sequel no less). I've drowned in the sexual slime of THE SUCKING PIT! But after winning a down to the final seconds auction for the hardest to find Crabs title, CRABS-THE HUMAN SACRIFICE, I decided it was time to give that series a straight through read. All six books put together form an interesting tale of nymphomaniacs, crabs as big as cows (or donkeys or...whatever else comes to mind), tank battling beasts, a hero name Cliff Davenport and a whole lotta people getting bisected, tri-sected and devoured by tiny mouths that are linked to big claws.
I love these books.
Guy N. Smith has become my literary (??) equivalent of Jess Franco it feels like. I really believe that at the heart of my obsession with guys like Jess and Guy (or obscure eurotrash genres) is the fact that I missed my calling as a librarian. I need it ALL, I need to put it in order on a shelf-but best of all, I treasure not only the actual items I find, but the search is an equal thrill. So, lets get crabby. I will warn you gentle readers that plenty of bad words will be on show, and there will be spoilers-though I don't think I can really convey how dementedly fun these books are without you experiencing them as well. While some are hard to find, you can find Smith's books for a song with a little looking-and many of the Crabs will set you back less than a paperback off the stands even after shipping. By no means definitive, these are just my impressions of the books... you can find some excellent resources for Smith online. If you want to go to the man himself, simply go to GUY N. SMITH ONLINE and poke around. Order a book and he'll sign it! Another fine spot for sharing the bliss of not only GNS, but loads of other great topics, go and check out the VAULT OF EVIL. Also, be sure to join the VoE Forums of course!

From the top then-we start off on the Welsh coast on Shell Island as two young lovers go for a swim.... 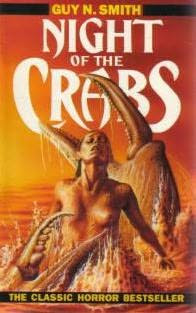 Night Of The Crabs (1976) After the opening sequence that screams JAWS WITH CLAWS as two young lovers are chowed upon while bathing on Shell Island, right next to a military base(!!), we meet series hero Cliff Davenport. Sad to say, the Crab Salad that started us off consisted of his nephew! Luckily, Cliff is a marine botanist and also very curious. Off we go to investigate the strange happenings. Along the way Cliff meets Pat Benson and the INSTANTLY fall in love! Phew! A strange sea comber appears during a moonlit jaunt for the pair and WHAMMO!! GIANT CRABS...yep, we know they are real and they spend a lot of time killing people in classic big monster ways. It also helps out that Cliff knows military man "Old Grizzly" Grisedale. Can you say "The Battle Of Barmouth is underway?" I bet you can. Tanks battle crabs, crabs hurl tanks... and you'll smile the whole ride through.
Night Of The Crabs plays like a classic horror film of the 50's, with a good helping of 70's gritty gore slathered on top. The prose is tight and words are not wasted-each detail furthering the story towards gory conclusions. There is the tendency in Smith's world (and it is a fairly unified place to my experience) for people to act utterly illogical. But it doesn't feel that way as you read along, instead it feels as if the writing is in fast forward. Guy meets girl, they fall in love. Crabs eat people...bring in the tanks. But this is what makes it exciting! Night starts the series out with a bang, laying the foundation of the monsters reign of terror with total precision. Is it flowery or pretty? Nope! Entertaining and engrossing? Absolutely. We know they are big and mean, now let the fun begin. Night contains some excellent set pieces, including an underwater seek and destroy mission that is equal parts Creature From The Black Lagoon and Jaws. Hell, it may be like other things, but nothing is like the CRABS! 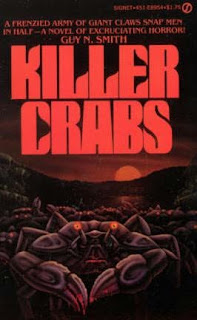 Killer Crabs (1978) The Crabs are back, and this is a great entry into the series. This time we have the big beasts in Barbeque Bay to deal with. Interestingly, after the first crabs book, the world just accepts the big beasts-so we don't have to go through any scenes of convincing the locals and the like. Just bring on the claws. Of all the books, this is the one I'd choose to be adapted into a film. Cliff Davenport returns and joins up with local authorities and the memorable salty seaman, Klin. Best of all is the hub of all the local drama, the nympho Caroline du Brunner. Klin is giving her the reason I called him salty seaman, and she is ALSO horny for criminals on the run with tons of cash stashed aside as well. This one has it all. Sex, violence, intrigue, buried cash and lots of clickity-click. Hell, there is even a subplot about evil Japanese fish poachers! As fast and enthusiastic as Night Of The Crabs is, Smith really hits the sweet spot (and the wet ones) on every page here. Look for the scene where one poor fisherman reaches for a bit of driftwood in hope of escaping the crabs...and it turns out to be his own leg! Which he only recognizes when he sees his own SHOE on it!!
After reading Night Of The Crabs and Killer Crabs I've already become a Craboid Clickity Clicker for life. But the series would roll on and the crab action would get even more outlandish. Big as sheep? Big as Cows? CARRYING TANKS?? Let's move on.

Taking a step back in time, Smith decides to fill us in on the Origin Of The Crabs (1979) next. An interesting move for the saga of the Crabs, because the first two books were loaded with undeniable giant crab attacks, there was an immediate reaction from the public AND the military. The crabs are smaller, and most of the book is dedicated to covering up their presence on Loch Merse. The laird of Cranlarich, Bruce McKechnie, has a problem. He runs hunting tours on his property and enjoys the heavy fees he takes from his rich clients. He doesn't plan on serving up his guests as Crab Salad, but that of course happens quickly. When two particular hunters refuse to be warned off taking midnight trips into the loch (clickity click my friends!!), they are devoured messily. This brings John Ryland, whose brother is sitting in the belly of several over sized crabs, into action. Luckily our laird ain't a lord with the ladies, and Ryland can hook up with oversexed and eager for love Christine Blacklaw... McKechnie's mistress. The pair investigate the monster in the loch tale... and lots of people die in the process.
Messily. 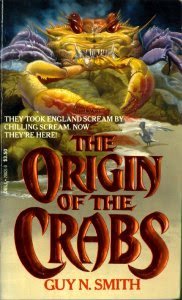 After the first two entries, this book is a welcome change-though it does fly in the face of expectation a bit. Slower paced, but the characters are typically fun Smith fare-and I was a bit surprised to see the author pull the trigger on the cast at the books end. Crab Gore fans won't be let down by the more deliberate pace, since the payoffs are quite large. As Origin Of The Crabs ends, the reader stands on the edge of the ultimate CRAB tale...the one that ties together the first three books with a giant pincer. After reading this book, you are warmed up for the magnificence of... CRABS ON THE RAMPAGE.

In part two... Rampaging Crabs, Corman styled Remakes and a crab side salad as Crustacean Domination wraps up!
Posted by David A. Zuzelo at Thursday, March 15, 2007

Yeah, I'm gonna need to read all of these. I have the first one. And isn't this all your fault? Didn't you send me Wolfcurse by GNS? I think so.

hahah...wait until I tell you about CRABS ON THE RAMPAGE!! Awesome stuff, I love my GNS books.

David...will you ever get around to doing Part Two? Following our chats about GNS about a year ago...I acquired the rights to the crab franchise and am reprinting all, audio versions of all and a graphic novel of the first book. We are working closely with Guy and he is a dream to work with. Send me you address and I'll send you a very limited A7 sized chapbook, signed by the man himself...Crabs Armada. Plus he just gave us the rights to 'Crabs Fury' (the comic with Charlie Adlard as the artist) and Night of the Werewolf (never before in English print)