Neil Vokes drops in for his list of ten top Eurotrash films. If you have yet to experience Neil and his artwork, you need to make sure to go to the online home of Neil's recent projects HERE. You can check out The Wicked West, The Black Forest or just bug him (as I do) for a return of his character EAGLE as soon as possible! You can read lots more bio stuff at Comicspace right now as well.

INFERNO--probably my fave Argento (SUSPIRIA is a very close 2nd) and I think I just love the style of this because it reminds me of my beloved Bava-which isn't that surprising considering his actual involvement in the film.

HERCULES IN THE HAUNTED WORLD --perhaps not Euro "trash",but it's my list,so there ;o)
Another Bava and a great one-my favorite peplum next to Steve Reeves' HERCULES (which,yes,Bava worked on-lol) And it has Christopher Lee vs Reg Park,baby!

LADY FRANKENSTEIN --a given on any ETPer's list,in my opinion,if only for the magnificent Sara Bey/Rosalba Neri's nipples! (Bobby T and I did a sort of love/lust poem to her in the recent TWW2)

BLACK SUNDAY --Bava's masterpiece! And in glorious B & W!! A continuing inspiration to my storytelling and one of the films I'd take to that mysterious desert island if I had to take only ten films (and a dvd player...and a generator...and...;o)

NOSFERATU IN VENICE --not a great flick,but it has style to spare (you wanna make an atmospheric horror movie? Venice is the go to place,baby!) just add K2 throwing priests out a window onto a metal grating and gratuitous female nudity and you have the ingredients...;o)

DEVIL'S NIGHTMARE --I haven't watched this in a few years so today this is on my list,but I might change my mind tomorrow-it was one of the 1st to pop into my head when asked,so it must have made an impression-I can still recall the style,Erika Blanc and Daniel Emilfork (so great in CITY OF LOST CHILDREN-born to play the Vulture in Spider-Man ;o) so...

HORROR EXPRESS --Lee ("It's a fact. And there's no morality in a fact.") and Cushing ("Monsters? We're British,you know!") and Telly ("Ahhh, we got lots of innocent monks!") against an ancient evil living in a missing link who fries your brains while on a scenic train trip...classic!

SPIDER'S LABYRINTH--I'm still pondering this one,but it's fresh in my mind and Hell...it's a visual feast,that's for sure! 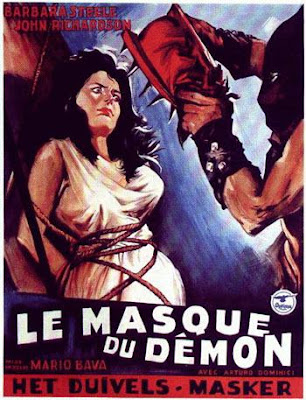