Off Season in MYSpace and going Boll-istic

I'm back at last, I had to spend a little time setting up the dreaded (for me) Myspace account, though I have seen immediate benefit from it (wow, I sold three books in 24 hours!!). If you want to poke in and check it (or be friends of course) I'm here:
David Z on MYSpace.com
I was amazed to find friends of mine already there, bands I didn't know still existed releasing NEW material (wow, nice Genitorturers demo called "Take It") and more content than you could shake several sticks at. Give it a look, just remember...the real world is YourSpace as well...

A few new things for me... I saw X-Men 3 last night, and was thinking it was by far the least of the films. Some great special effects highlight the film with The Beast being particularly cool in his fight sequences, but the characters lack. And any fan of the Claremont/Byrne era knows how it will end, it just isn't as FUN as the originals. Also, I really hate when comic book movies feel "comic booky" and go way over the top. No spoilers since it isn't out til tomorrow..more later. Overall, if you saw the others and liked them, see it. 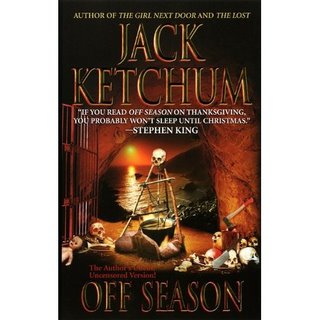 More exciting was the arrival of Leisure's new paperback version of Jack Ketchum's awesome first novel, OFF SEASON in it's "unexpurgated cut." I'd read this version in hardcover some time ago and read it again just for fun over the last few nights. A fantastic and savage book that is required reading in my opinion. A few big bonus items are included as well. The afterword by Ketchum is really good and gives a nice look into what happened to this book the first time through and the power of revision and editorial "negotiations." PLUS, you get a forward to another short story that was part of the plan for She Wakes entitled Winter's Child. A good little tale this one as well. For under 7 bucks, it's the best thing at your local Waldenbooks this week. By far.

And finally, I may be the only person to RUN to Best Buy and get the Bloodrayne Director's Cut DVD, but man do I love Uwe Boll! Bloodrayne isn't a great film by any stretch, but features intensely gory special effects by German splattergod Olaf Ittenbach (of Premutos infamy) and he really blasts the blood all over the place. This one is really nifty as it makes LESS sense than most of Boll's other films...flashbacks inside flashbacks inside flashforwards? Stultifyingly cool in my opinion. Plus, this has one of the most amazing extras on DVD. DINNER WITH UWE! Boll comes off really well here actually, discussing the misuse of genre in films these days, diluting them with everything else to remain commercial. It's the key to his movies that opens the door to my enjoyment. He isn't trying to do anything but entertain here, and does so in the way that Hell of the Living Dead or Burial Ground do...just roll with it. However, I have to say that the people interviewing him are...well, I don't want to sound cruel, but uh...it just feels akward and I've never just fast forwarded through questions in an interview because they hurt to listen too before. Go figure. Worth a rental for gorefans and BollPals (all three of us), all others need not apply I guess. I sure do like that Kristanna Loken... They couldn't have picked poorer cover art than what is on the DVD now...so here is one I think is better. Enjoy! 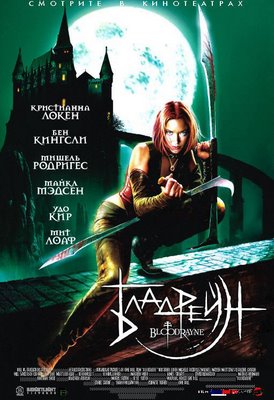