First...an apology of sorts. Sorry that this took awhile, I had a severe medical issue arise (you think anything else could overpower YOR??)...but I'm getting back underway here. So, without further delay... get yer headphones and pop an (Oliver) Onion in your mouth-swish it around and prep Yor Ears!

The DeAngelis Brothers are a rock solid pair of Italian soundsmiths, ranging from classic scores like Torso, Keoma and Man Called Blade to the fun kill em all tunes of Blastfighter, Alien 2:Sulla Terra, 2019:After the Fall of N.Y. amongst others. They also LOVE to record songs as Oliver Onions!
The OOs have quite the legacy of strangeness behind them, and none so great as some of what appears on the soundtrack for YOR of course. 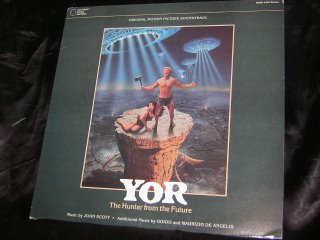 Lookit that album cover...I hope it sold for a huge price on ebay! The album version was released on Southern Cross records, but SC had a nice surprise in store for the later CD re-issue, which was a lot more tracks for the Yor fan to enjoy.
What follows below are the CD coverings for the Yor disc where you can stare in awe at press photos, read track listings and if you go alllll the way under those pics and click the magic link and get that little item.
Well, you can sing along with the crew...because in YOR'S WORLD...HE's THE MAN!
It's Yor's World! 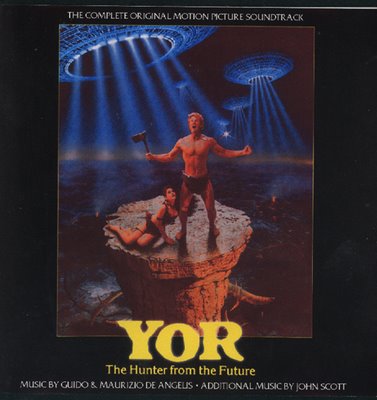 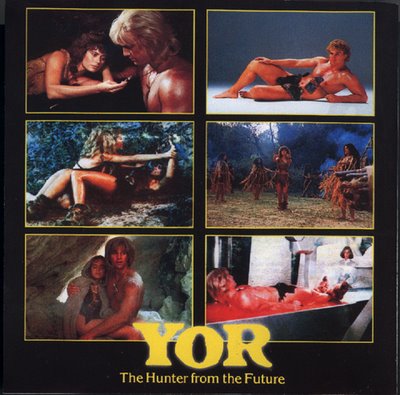 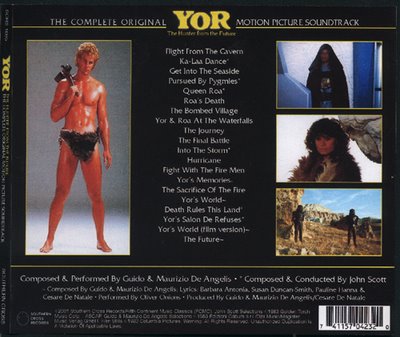 By YOR Command this has been the BattleYor Galactica of YOR worship. Fantastic stuff Mr. Z. Thanks for bringing it to us :) . Paul

Thank ya and thanks to YOU as well Mr. Cooke. Yor a gent and Mondo di Yor Scholar sir.

Man, I've been trying to find the theme song on filesharing services for months now with no luck. Doesn't sound like your clip is the whole song, but I'll take it for now.

I watched Yor as a rental on the old RCA Videodisc system not long after its home video release. I distinctly remember eating a 99-cent Tostino's frozen pepperoni pizza while eating it, and the combination of crap pizza and crap movie made me ill and has obviously left an impressionable moment on my life 22 years after the fact.

Thanks for diggin' the theme song up.

I would love to find the Yor theme song recorded somewhere online.. even a clip would do! Can you help? I followed your link, and it's broken. Thanks!!!!

Sorry, I can't find another copy online. SOMEONE must have it...let me know if you have any luck!