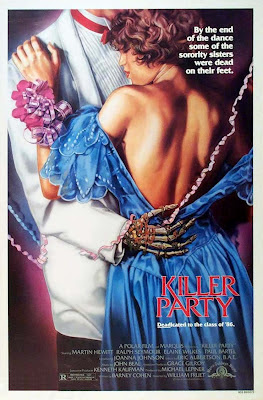 
After a nifty movie within a music video opening by WHITE SISTER (!!) Killer Party tells the tail, urr...tale, of some girls pledging a sorority.  One of them is a prankster and she pulls off a nifty decapitation to surprise her sapphic sisterhood.  But does that rise the ire of a local demon?  OF COURSE!  Guys try, and succeed on occasion, to get near the girls underpants...a little humor is sprinkled about, Paul Bartel devours some scenery (and gets a totally groovy death sequence that lasts a second longer than most) and it all leads up to a really really fun bit of demon stomping and even a great little twist ending that makes the ride feel worth it. 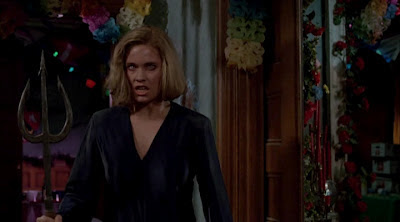 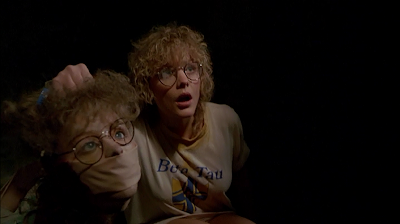 Splatter fans won't be satisfied at all, and if you are looking for a chiller for your Halloween viewing, this ain't it either. However, if you love a good campy 80s film and enjoy lots of RRRARRRGHing and post trauma demonizing reveals, you'll dig it.  And hey, it has a track by Laura Brannigan to boot!

OH OH OH!! How could I forget this detail?  Leg Warmer fetishists will love this one!!  Not that I like women in leg warmer...s....uh....alright Aerobicise really warped me forever. Sorry.