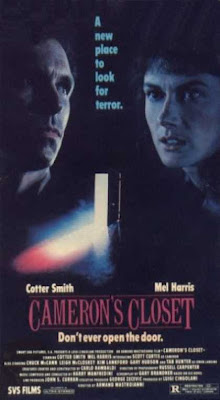 FEARnet has CAMERON'S CLOSET up, and I have to admit this one has been on my list of flicks to check out someday--so why not?  It's HALLOWEEN HORRORS after all.  I had low expectations to say the least, but the random factoid that this was based on a Gary Brandner novel.  In the last few years I've read the Howling novels (on Kindle cheap by the way) and Floaters as well-so, how bad could it be.
I have to say, not nearly as bad as expected.  The logic is a bit warped, but this is SO VERY 80s it hurts, even though it was made at the tail end of that magnificent decade of horror film history. 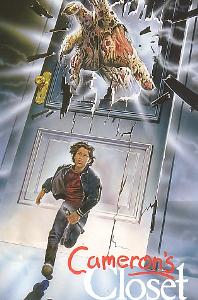 Poor little Cameron has psychic abilities, but has ended up in the care of his rather obsessive father and is being studied. When he gets hold of some kind of mystical dildo looking statuette (which he calls The Deceptor)--well, hell breaks loose.  Dad is played by Tab Hunter and he gets a wicked death scene inside, yep, Cameron's Closet. The demon thing decides to hole up there as Cam moves to his mothers house.  Obnoxious boyfriend gets sizzled (this is a great stunt by the way) and the cops get involved.  But our lead officer has a lot on his mind and demons and visions are guiding him as well as the game becomes KILL CAMERON! 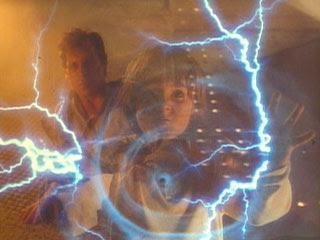 So, Brandner has some interesting ideas that could pretty easily fall flat, and do on occasion, but the whole thing is lifted up by a handful of really cool set pieces with a giant Carlo Rambaldi created demon (and it's hand puppet version), a bunch of "inside the closet" bits that feel like Nightmare on Elm Street territory (this was produced by Smart Egg, the company that did up Freddy right!) and a cool score by Harry Manfredini.  The acting is a bit off, but it was odd seeing Leigh McCloskey pop up here and I thought the alcoholic mom was a nifty touch that pans out for things sort of swirling around Cameron since she is hardly the most reliable parenting model ever presented.


A little gore, some fun music and a chance to see what Brandner would do with a screenplay in the cost of your basic cable?  Give it a try, after the film I couldn't help but think that in it's own way Cameron's Closet doesn't stink of old socks and hidden dirty underwear, but has a funk of awesome that blows through the room when the demon runs through.