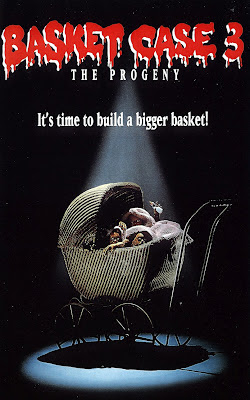 Basket Case is one of my favorite cinematic experiences of all time. It was a skipped day of my Freshman year of High School.  It's an amazing little film that always holds up.  I guess the second one didn't really flip my lid when it hit video and I haven't seen it since.  When my pal Dan at Exploitation Retrospect mentioned #3 I had completely forgotten it even existed!  The memories of some Fangoria images of Belial as a robot (?) flooded back and last night thanks to DT I've viewed the film.  I don't know if it is a nose pulling spectacle, a brilliant mini-masterwork of self aware pulp trash or just a really silly movie, but how can anyone care?  It's got ROBO-BELIAL!

If you missed or forgot what happened in Basket Case 2 (I did), the very opening shot of this film will catch you up as Belial and his similarly misshapen torso thing get it on with all the subtle shrieking you could hope for.  What a start.  Duane, his less mutant brother, is pretty pissed and takes a bat to our monosyllabic mangler sadly, and tries to sew him back where he belongs.
Shit! 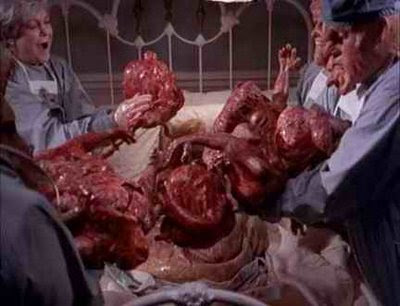 Basket Case 3 picks up right away and we join all those awesome Freaks you remember dimly (or will have shoved into your brainpan very brightly as they pop up here) as they deal with Eve being pregnant and eventually delivering a little of Angry Little Belials!  There is some singing. A little plot here and there.  And then...all fucking hell breaks loose as Duane gets in trouble, a giant mutated MacGyver kid builds an exo-skeleton Gundam for Belial and a hot woman shows up with a whip and gets shredded.
It's REALLY hard to give a fair synopsis of this movie, because it just doesn't feel like logic or storyline applies in many ways to this film.  Honestly, Frank Henenlotter has crafted what feels like the ultimate movie to watch with a horde of stoned Drag Queens at 4 AM.  EVERYTHING is hysterical. Not "hah-hah" hysterical, but HYSTERICAL in pitch and tone.  If you are open to that, this is an amazing film that you will love. I did. I was laughing so hard at some of the gags I was gagging on my couch.  Watch for Jim O'Doherty as Little Hal as he counts out the Belial Pile!  TOO DAMN FUNNY! 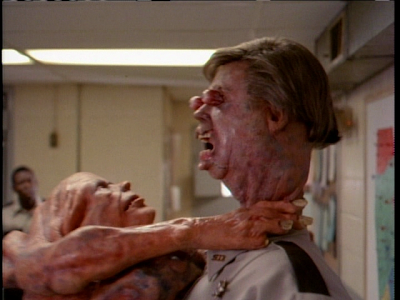 Basket Case 3 is definitely like watching Rinse Dream do a porn where the latex condoms are actually the characters.  It isn't what is happening many of the times, but what is being said. The dialog plays along with classic wooden horror film camp dialogue as Duane and even Belial shift to the background for much of the movie.  I really enjoy Kevin Van Hentenryck as the beleaguered brother as he alternates from showing the range of a drunk at the Rocky Horror Picture show to utterly straight faced hilarity (watch as he asks for a Swiss Army Knife while in a straight jacket, I'm still laughing about that delivery)--but he is even outdone by the lovely and as wooden as Peter North's cock on the set of Craven Moorehead's 2011 masterwork, NORTH POLE #80!  But it works...it totally works and this is definitely that party flick you'll watch with your friends and suss out those that think head twisting and sentient stump fucking is the definition of hilarity!

I guess I am one of those people. 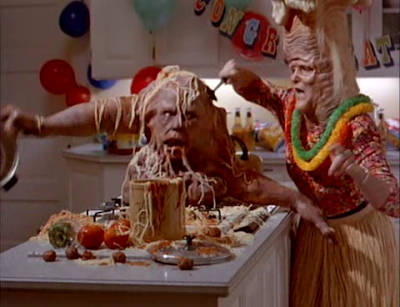 Quick thoughts...Frank Henenlotter is a mad genius that doesn't strive to deliver films for the fans in my opinion, he is making the movies in his mind, and Basket Case 3 is one far reaching and far out flick.  Gabe Bartalos creates some amazing (and mobile) creations that I wish would remain fleshy, but have a chance to be fleshed out in a future Henenlotter film.  The movie will make you laugh or you'll be out before the bus ride singalong.  THIS is a Halloween Party flick!