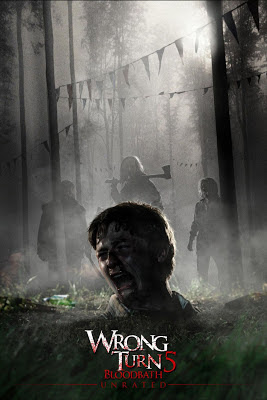 I did it!  All 5 entries in the Wrong Turn franchise are now part of this months HALLOWEEN HORRORS.  I don't know if I deserve a pat on the back or a clonk in the face with a shovel, but I enjoy this series and part 5 doesn't disappoint.  It has some definite minuses, but keeps things in the positive column for fans of the series (and probably very few others) as it tries something different.  After 3 flicks that stuck to the formula, director Declan O'Brien varies it up again by building off the rather tiny "history" provided in part 4 and has the backwoods boys in an entirely new adventure.  They have a new wrangler, and it is none other than Doug Bradley!  He gets all the good lines of course, and adds a new mission for the lads to go on a rampage of physical special effects pulled off carnage.  See, right there, I dig that they don't just slap these in the standard sub-standard Amiga grade effects machine and churn them out with a "fuckit" when it comes to bringing the exact thing they promised when we put this in the player. It's gory for sure.  But...those minuses keep it from being one of the best in the series at times. 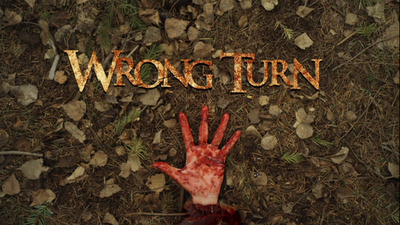 After a great opening bit with a jogger in a Bruce Lee tracksuit (the Bruceploitation fan in me nerded WAY out) we have the first hand chop to make you say "ooooo" and then PLOP, right into the above credits sequence.  GREAT fun, and it sets the tone right off the bat.  A little lighter than the previous episode, Three Finger, Saw Tooth and One Eye are really just gibbering maniacs that act more like children than the feral hunters of the original film. They are pointed to destroy by their new father figure, a murderer on the run played by Pinhead, and they do it.  Endlessly. And gleefully.  The opening scene ALSO points out a flaw with the approach. The make ups look really silly when they just sit out in the open with no real lighting or dramatic effect.  I actually thought that it was going to be a prank that Three Finger was actually the character until the gore started.  But...I got over this quickly.  Because it doesn't really matter in the end, it's about putting some jeopardy in the horror movie spinner and seeing who survives the day.
And there are boobs right after this stuff, we like attractive ladies getting undressed right horror fans?  So we are tracking here...take out the "scare" expectations and lets roll on. 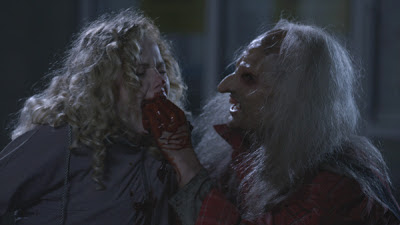 See that, a little lighting helps. Especially when someone is getting Anthropophagized.
So, the plot this time is that during a local town festival that draws EVERYONE but a few people out of some empty sets in Bulgaria (ur...North Carolina), the clan tries to pick off some kids headed for fun with their loose bras and weed. Problem is, the leader of the band is captured and locked up by a pretty policewoman with what appears to be a lot to prove. She is going to get some justice.  The kids end up just sort of being let go (!) because we need to put someone on the soundstage. And then the film goes batshit nuts with crazy kills.  I was particularly impressed by Three Finger in a little earthmover thing driving around and mulching people ala Motel Hell and there is even an occasional good bit of chase action, but O'Brien doesn't focus that way, instead he puts up elaborate gore scenes AFTER the hunts are done. Sort of swaps up why these films started, but why not. This is part 5.  Can anyone survive?  You, my hardcore horror loving friend, will probably see this on cable and find out.  It's a good ending really...I liked it and will certainly take on Wrong Turn 6 if it happens. I'd like them to go to space if possible. 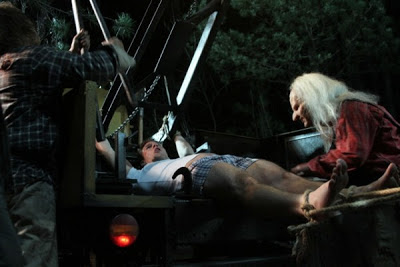 So this is where I think to myself, what is the best way to put across what Wrong Turn 5 is, exactly. Think of the SAW films and remove ALL the plot and characters and insert some very very inventive mutant hillbillies instead of an evil genius.  Jigsaw has mechanized mayhem.  The Hillbillies have hammers.  Jigsaw brings "enlightment"--and The Hillbillies bring agony.  This is really simple filmmaking, but it's done well enough that I find it to be entertaining on the level of a promise fulfilled to me as a viewer.  One thing that I can't quite wrap my head around is the decision to remove a lot of the stylized views of the clan however, it would be fine if they were being used a bit more humorously, but as laughs go, Wrong Turn 5 features some very sadistic deaths (O'Brien refers to the fact that he spends a lot of time pacing in his office trying to think of new ways to kill people)...they aren't played for chuckles at all. It's like a demented carnival ride (I love those), but the staff of the haunted house aren't doing it exactly right in order to get the maximum "YAAARGH" from their patrons.
Deeper cinematic questioning than Wrong Turn 5 demands for sure.

So, did YOU like the others. Did you like them all and hate #4?  I liked 4 more than this, but as always, our opinions may not match. If you were drawn to watch 4, then you will probably want, need and deserve to watch number 5.  I did. I do. And I got what I deserved and I liked it!
And this promo by the way, is awesome....

I think you just created a new word in "Anthropophagized" and I can't thank you enough for it. Great review.

It's a scene that leaps out of the D'Amato film (and the Sciotti poster even more). Thanks for reading!