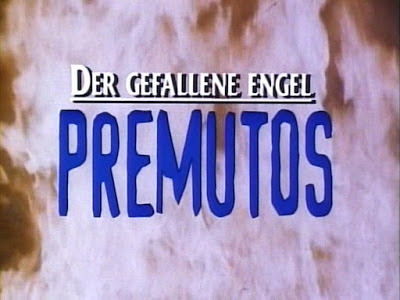 I'm back for more Olaf Ittenbach this Halloween Horrors season.  After BLACK PAST rocked me back into the German Splatter Zone I couldn't resist heading back into one of the most ambitious and gore drenched low budget films I've encountered, PREMUTOS!  I truly HATE that this received a completely pathetic US release that featured a German version without subtitles and a wretched half dubbed edition that demolishes everything in the film, from the cool moments to the INTENTIONALLY funny bits.  And this film NEVER disappoints.  You want to try to count the amazing effects? I bet you'll run out of space on your tally card before you are 1/3 of the way through the movie! 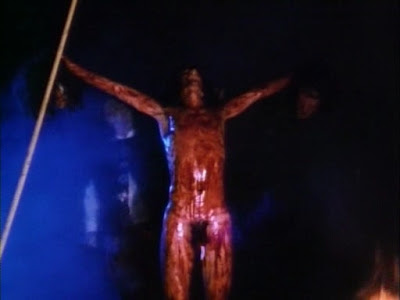 Premutos is easy to recap, it's a heart warming (and eating, and exploding) tale of a nefarious fallen angel that travels through history in an attempt to get back to Earth and hold dominion over we poor little flesh sacks known as humanity.  But humanity is tougher than this Fallen Son would think...and the movie tracks the dastardly beast through all kinds of scenarios. From the crucifixion of Christ (!!!) to the battlefields of histories most violent conflicts, Premutos is there.  I bet it thought it had found the perfect place to strike as we meet Mathias (Olaf Ittenbach)...a merry loser that gets his teeth drilled (watch for the DISGUSTING blood suction gag...ACK!) and his testicles SMASHED by a soccer ball. And that funny bit even sets off a horrific flashback that leads to massive dismemberment from a past life intruding into his thoughts.  Nobody said being the son of Premutos would be easy.  Ittenbach takes a whole lot of latex laden punishment in these scenes!  It's nastier than the jumbo swollen dong he is left with after the ball bursting. 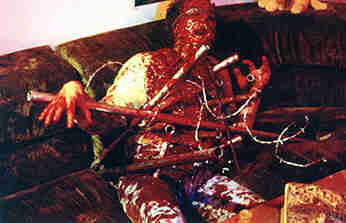 Of course, it doesn't go well as Mathias' family and there friends gather for his zany dad's birthday party... and in one of the most stunning sequences in a berzerker history of HOLYSHIT moments, watch as Ittenbach is impaled, exploded, wrapped in barbed wire and reborn into the harbinger of hate!  And then we are off to the races.  The goofy party goers RULE not just because they fall in massive fashion and eventually whip out a tank (yes, a tank) to battle Premutos, but because their little sub stories are actually entertaining and funny and well put across. The woman that slaps the crap out of Hugo cracks me up, she is really laying it on hard! 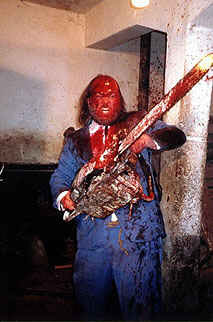 I think this is the crossroads for viewers that settle down with these earlier Ittenbach films.  I think he has a very unique style not only in the effects and scenarios he crafts (and these are crafted)-but also with his sense of pace and attention to character details that aren't exactly the usual way these films play out.  You'll either get into it, or you'll tune out after the 814th flying limb or the 200th gallon of red fluids splattering your screen.  I love the drive and ambition in every frame of Premutos.  Even when the script says "then he flicks a snot ball in her mouth" the director puts together an effects scene that has as much tension in the build up as most slasher films get for the horror sequences.  I'm all in for Olaf...and the like minded readers here will be as well.  Find a subtitled print...settle in and be prepared for pure splatter and some great laughs along the way! 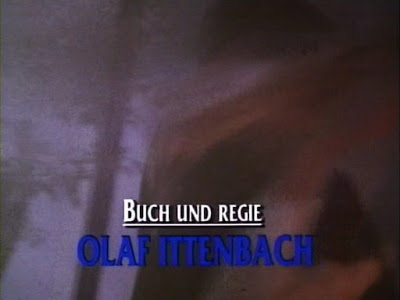