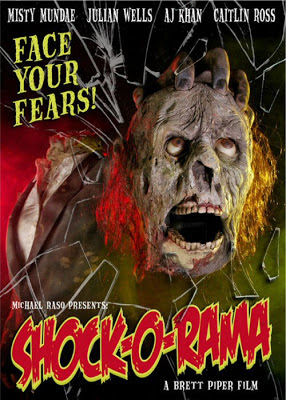 Halloween is a time for embracing all the rubber mayhem that invades the local abandoned shops, the big empty auto mile locations and that back aisle of the local drug store.  That is, in a way, the spirit of Brett Piper films in my mind.  A monster movie maker with a heart that beats in stop motion, I always find his movies fun to watch for what they are and as pure entertainment.  Shock-O-Rama is a weird little slice of anthology filmmaking that takes the usual stable of softcore entertainment crew at Alternative Cinema something strange to do and contains my favorite stop motion car mech EVER!  Let's look at the bits n' pieces. 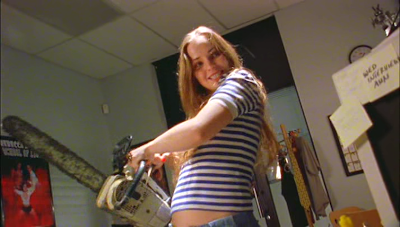 Misty Mundae is on hand armed with her sweet smile and easily dropped towel (which is given quite the little wink n' nudge here) as Rebeca Raven, horror starlet. Tired of the Tits n' Terror flicks fobbed on her by a distributor, she heads off for a break.  In the ZOMBIE THIS segment she ends up having to face an undead creature and embrace her roots as a horror heroine.  She does in fun, and funny, fashion.  Look for the payoff a the features end since this is the wrap around bit that gives us a production "that starts Monday" doing a talent search for naked chicks in two shorter segments!  First up, MECHARACHNIA! 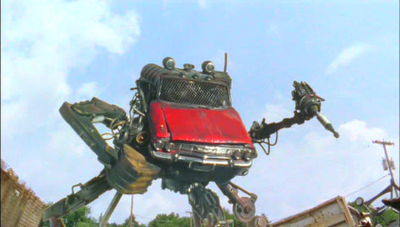 Some aliens crash land in a junk yard and have the owner, and his now distant ex-wife, trapped in said refuge of refuse until they find a way out.  They shoot at each other as nifty little animated creatures fight our occasionally funny foils for the action.  But it all comes to a head as the titular creature is unleashed, and it is a ton of fun.  Genuinely funny on occasion, the sheer craziness of the car-eature sells me on the entire film.  Brett Piper AGAIN shows he is tapped into the very core of what starts building a horror film fan.  Look at the picture.  That is cool.  Oh, and this as well... 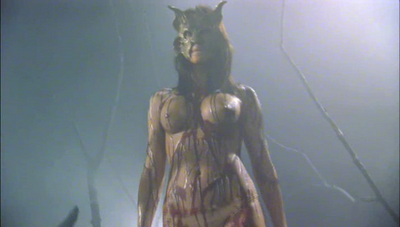 That takes us into LONELY ARE THE BRAIN which features a house of psychotic women being tormented with dreams of gruesome horror and lesbian long tonguing.  Add to it that the sinister sexy scientist (played by Julian Wells) is just abetting a giant overstimulated brain from the future that is basically a sex negative from a futuristic Cafe Flesh and is causing all this bush, boobs n' blood and you are deep in Eerie Pubs territory!  It sort of meanders at times, but incorporates surreal images with campy flashbacks and a style that is unique to Piper's work to make for a fun second segment.  I really enjoyed the interplay with the monster and his prey at the end, the dialog is sharp and actually works very very well.
LONELY ARE THE BRAIN appears to be a RINSE DREAM acid trip made for the horror crew nostalgic for the films of their youth, with the "dirty and forbidden" excesses of the 70s Drive In flicks that sat at the bottom of triple bills.
And I love those as well. 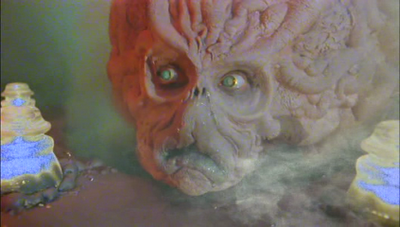 If you don't know Brett Piper's work I would point you to They Bite first, but Shock-O-Rama is a great little film that hits all the right buttons as a both a tribute to camp classics and as a piece of EI Cinema's line of skin n' sex flicks.  Give it a look if you dare!