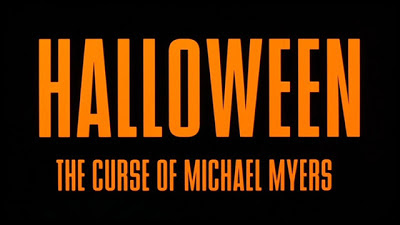 I was perusing the cheap horror racks at Wal-Mart and saw that the Blu Ray editions of Halloween 4 and 5 were $7.50 each.  I haven't seen these since they were released to theaters, so I figured it would be fun to check them out and the price was surely right.  I've always thought of these films as "the later" Halloween films even though I've seen all the others that came after this (really, I think of these as new and there are several others AND a remake AND a remake sequel??)--so I was SHOCKED when the date of 1988 pops up at the start.  These "new" Halloween films are almost 25 years old?
I'm aging.
So, what did I see.  I found the pair to be really entertaining, now distanced from the "hey, Halloween 3 was awesome, why are we back to Micheal Meyers after all the flesh smashing he got finished off with in part 2, dammit" syndrome. They surely aren't great, but I've seen much much worse. 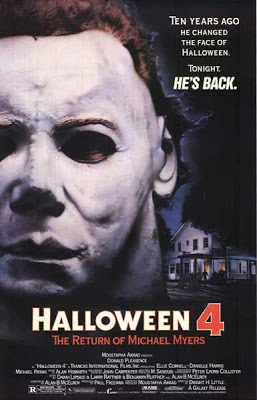 Dwight Little, a director I've always attached foremost to the Nico Mastorakis penned BLOODSTONE until now, gets the task of bringing back Micheal to his hometown here, and while it doesn't really match up much to the end of part 2, it sort of works well enough. The screenplay by Alan B. McElroy short hands any explanation in order to set up more action, and I'm good with that. Interestingly, this will be the 5th McElroy credit I've seen this October since he gets character credits for Wrong Turn!
Loomis is back and burnt up (funny how he heals up as the movies go along by the way) and Micheal is being transported from one institution to another as his doctor is hopefully headed out to pasture.  However, thanks to some chatter from the crew transporting the boogeyman they spill the beans that Micheal has ONE...MORE...RELATIVE!!  Clenched fist and WHAM, he's back.  Abrupt? Yeah, but it works.  Cue the music and it's back to bone busting business for Pale Shatner Mask.  His relative is a little girl named Jamie and her foster family is doing the best they can to keep her steady during her families infamous season, even if the other kids aren't helping.  But bad dreams and groovy backlit shots of the ghostly mask have her in a tizzy.  And boy, does she want to go trick or treating all of a sudden.  Micheal mows 'em down in fine (and certainly 80s MPAA censored) fashion as one of the earlier American slashers becomes reverse engineered to fit the mold of the decade it missed.  At least it brought this... 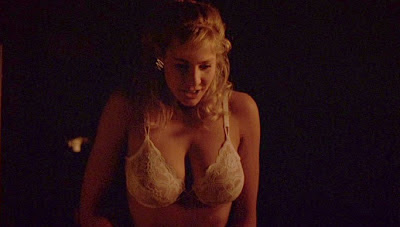 H4 is a mixed bag, it is hard to really shake the history of the first two films in my opinion, but I think bring Donald Pleasance into the mix is a great boon here, he is great as the trembling manic psycho psychiatrist as expected as well as the addition of Danielle Harris who has a knack for selling her character far beyond her years.  If these two films have endured for any reason, I think Harris is as important as the Meyers character.  Everyone pulls their weight, be it as large boobed victim OR as harried step sister or even shouting sheriff that tries to reign in the doom fearing townsfolk.
The spooky stalking is up to snuff and the snuffing is done with some decent tension if not overtly gory beyond what had come before it in the slasher genre, it's a fun dead ahead horror flick.  The rooftop sequence is really well done and actually feels dangerous!
The music of the Halloween films is a real key to success and Alan Howarth sticks close to the original in this one, though he would branch off later quite a lot probably out of boredom with trying to jam the simple Carpenter track into 90 minutes over and over.  It works here, though I preferred the Halloween 6 score myself. 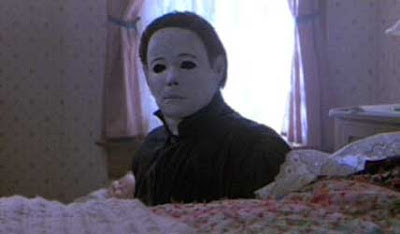 Anyways, we are off to a good start here, so the next night it was time to see what horrors lay ahead for Jamie. She did survive after all...and Evil Never Dies! 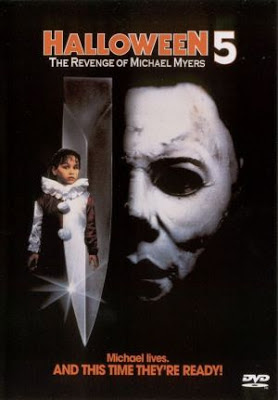 One year later and things have changed a little. Jamie is now hospitalized in Haddonfield under the watchful eye and far from soothing bedside manner of Dr. Loomis as her stepsister and 80s hot pal Tina drop in on occasion to see her freak out. Why is she freaking out you may ask?  Well, because now Jamie has a psychic connection to Micheal and can "see" his actions and intentions, giving her catastrophic seizures and fits.  The docs are concerned of course, but Loomis sees this as his chance to find Micheal one more time!
It doesn't take long before the stalking n' slash ensues and away we go.  Jamie getting chased about in small spaces was lots of fun and there is even a surprise death I was really glad to see happen given that it ups the stakes for the entire cast.  But does Michael complete his mission? Let's see, there are a lot more sequels... 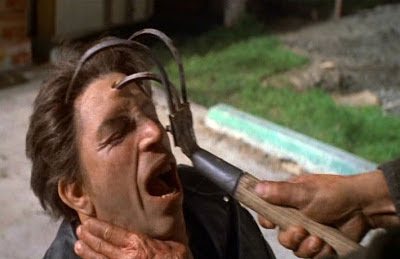 H5 is interesting, and while I think that part 4 is a bit better, this one has more elements and a darker tone that I really prefer.  The introduction (that goes NOWHERE) of a booted dark cowboy like figure (I saw a Sisters of Mercy poster in here, and it definitely is an early 90s goth look) is intriguing, and I guess it does get explored in a different way in the next film, provides a Deus Ex Slasherina to help Micheal out of a bind at the films end as he is taken from captivity.  But it isn't just that, I like the really menacing tone that director Dominique Othenin-Girard brings along. The violence is really brutal (and again, surely censored by the MPAA during the height of their Killjoy years) and the characters are actually not all that lovable.  Watch Tina turn her back on a flipping out little girl so she can meet up with her dysfunctional boyfriend to get laid...hard to feel bad when Michael deals out some violence on these characters.  Loomis is also way more possessed by his now seemingly endless task of destroying The Shape that haunts his and Haddonfield's dreams.  This is perhaps the grimmest of the series until Rob Zombie would take the name and mask into a very different existence from the originals.

Danielle Harris puts in the best performance of all here, she manages to keep things feeling like they have some kind of weight, even when it is just slasher rehasher time.  I guess it is one of the great let downs that 6, while it does do it's own thing, couldn't have utilized her talents.  The work put in to her "reunion" with an unmasked Micheal goes to waste because of this.
A unique entry in the series, I like H5 quite a bit--it may not be the high point of the series (which was part 1 for me), but as a late 80s horror film, it is rock solid entertainment. 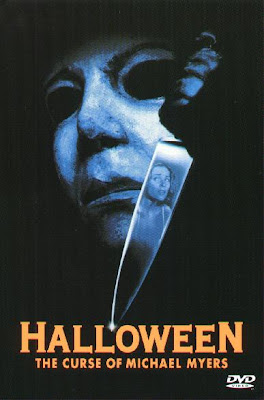 Now, before I even look at this, I had not watched the film since the "Producers Cut" made it's way around the circuit years ago--and I honestly remember very little about it. So, I'm watching the released edition which suits me just fine for this Halloween.  H6 is pretty jarring stuff if you were devoted to the series I would imagine, it really messes with the established ideas, but I found the changes to be positive, injecting new life into the old idea.  I found it funny that "Micheal in Space" gets goofed on, but I love Jason X...maybe they could have tried that!
Jamie, from the previous few films, is now delivering a baby (ooooooohhh fuck...here comes Micheal) under watch from a bunch of hood wearing druids.  Maybe Joe Chappelle, now the executive producer of the popular show FRINGE, was thinking Halloween 3 could be incorporated in some way, and then he and screenwriter switched gears, but I found all of this to be compelling. Take booted dude from 5 as an emissary of these Thorn Cultists and drop him into the ending of the original film and you wonder why Loomis couldn't keep up.  If you don't let it tarnish what went before, it isn't a bad idea at all!
Jamie is given one chance to escape with her baby by a sympathetic nurse (oh boy...Michael bait!) and we are off to the races as a weird teen (hey, Paul Rudd) that was one of the kids being babysat by our original final girl, has figured it all out. ALL OF IT.  Hah!! He knows about the curse, the druids and all that good stuff, but Loomis is on hand to find out exactly who is pulling the strings du slash on Meyers.  And he does. And...well, there is a lot of killing and a bunch of interesting talking and even a cross between Howard Stern and Morton Downey Jr. along the way. 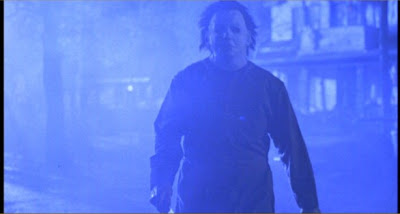 This is probably an easy one to beat on with it's obviously messed up history and presentation, but the core of the movie is something I really like.  It feels like a fresh spin on the tropes and characters in the Halloween Universe and was done up before the hyper hip SCREAM styled collage postered films that would come after this.  I really think this is almost a nice first issue from a comic book series based on the original Michael Meyers myth, it is reaching for something else.  Sure, the arms are a bit to short to box with the Godlike presence of the original film, but as something distilled from an existing storyline, I liked it a lot.  Special props go to Alan Howarth for really amping up the score and creating that new, heavier and more menacing, tone as well.  Suddenly Michael (who I've always seen as a sort of playful Halloween Horrorizer barring part 5) is a monster with a reason and perhaps even a rebellion ahead (see, it sparked my imagination!)
The gore bits are well handled, Micheal isn't messing around and I actually enjoyed a lot of the pieces of the film that skip past our Boogeyman, especially the revelation that some of the characters in the town are part of this conspiracy.
It gets little love, but I don't think this one is a film to toss aside, but a look at a group of people trying to do something fresh with the tossed salad of ripped guts and pierced skulls.  Don't worry, the later efforts in the original series wouldn't be nearly as ambitious and they still exist!