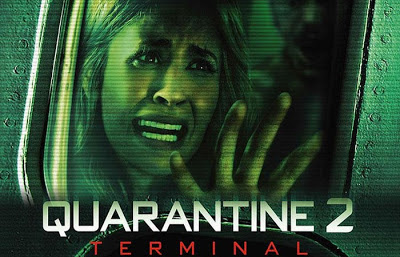 I've been curious about this film for quite awhile, usually checking the DVD Dump bins for a copy to no avail, but now FEARnet has put this as well as the first film AND the original REC and REC 2 up on your On Demand selections.  WOO!
I love the REC films, so I had and still have no interest in the first remake, but this film goes out on it's own (I assume it was shot as REC 2 was still being wrapped up) and is one of those film making moments that makes me jealous of the writer of the film.  What to do?
Well, take a virus movie and put it on a plane for awhile, you can't really escape the plane and germs have a way of staying on board and spreading fast.  And that is just what happens as our lovely stewardesses and range of trope loving passengers begin to succumb to tiny lab rat bites that turn them into crazed mutant maniacs.  You got angry kid, fat guy, hot woman on the prowl, annoying douche and cowed wife...and my favorite was actually the addition of the Parkinson's Disease stricken passenger who has to watch in horror as things unfold.  I say thee WALK oh poor man...better yet, run and screech ARRRRRRRRRRRRRR while devouring your fellow passengers!! 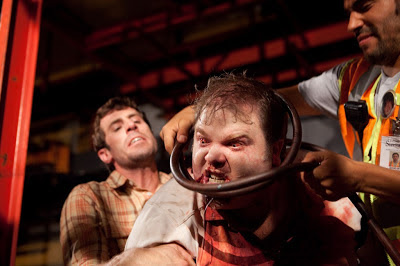 The plot is as simple as the REC films are, after being crammed into a small space the airplane lands in a terminal and is quickly locked down by CDC troops.  Who will survive?  Can anyone really get away?  And if they do...well, you know how this film ends just like I do.  That doesn't mean the ride isn't a lot of fun, even when things get a bit bogged down in an explanation. It's like everyone forgot why the original films were good, they didn't need BIG plot points, just a lot of inferred things to trip through the viewers mind, almost as if they were trapped in the scenario as well.  Here we do get a solution (couldn't we get a better name than DOOMSDAY CULT by the way?), but the focus shifts back to survival quickly enough to stay fun. 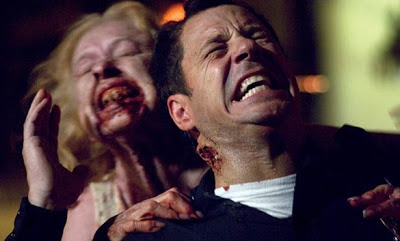 If you like the REC series this is worth your sub 90 minute viewing in my opinion, it's an interesting annex story to the established storyline and it doesn't really feel exactly like the other films in the series making it fun as well.  There is some groovy gore, a few good jump starts and I really thought that the "innocent schoolteacher" routine by Josh Cooke was really well staged and has a solid reveal.
It's gory, it's short and it has enough zombie styled action for those that want it to make you smile in your seats and maybe even jump a few times.  Of course, it really just makes me want to watch REC and REC 2 this month as well...argh!  To many Horrors this Halloween to take in!

John Pogue is also credited as the director of the upcoming Hammer Films production THE QUIET ONES, so HammerHeads may want to check this out as a demo reel.  He definitely has a handle on stylized RRRAAARRRGHING!

Starkwell and Lovelock had a harder time with this movie: http://www.zombiehall.com/2012/07/quarantine-2-terminal.html