Para las nenas, leche calentita is one of those oddball Lina Romay items, directed under the Candy Coster name, that I've long been curious to see.  Following along with Lina filmography in the awesome 1 Shot Publications "Lina Romay File" this would be her last solo directing effort before working closer with Jess on the TV parodies of Falo Crest and Phollastia.  Sure, you can wonder what Jess was doing during these productions, but he was plenty busy in 1986!
Well, I have now had the chance to enjoy this rather goofy 1986 hardcore entry that delivers flacid penis by the inch,  flab by the pound and a final creampie close up shot that just about says it all!  SPLAT! 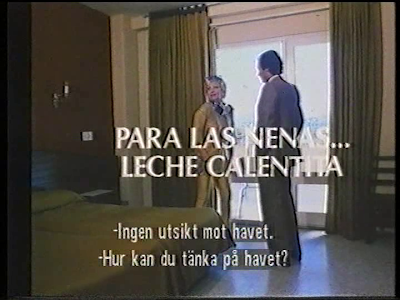 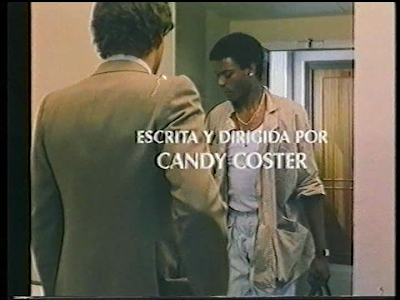 “I love the cinema, as an actress, an editor, as a technician and a spectator…It’s said I am an exhibitionist. Every actor is one, I gladly accept that. I’m not a hypocrite."  Lina Romay (Madrid, April 1996 as quoted in "The Lina Romay File: The Intimate Confessions of an Exhibitionist" - 1-Shot Publications)

And there is the very essence of why I will watch anything that Lina Romay has appeared in!  Peggy Bundy may have rocked this outfit, but she sure didn't back up her talk the way that Candy Coster would! 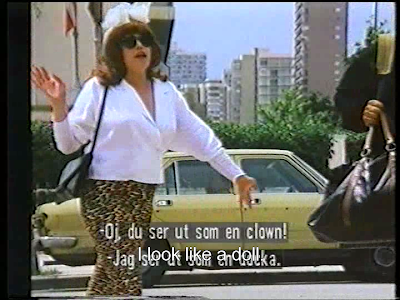 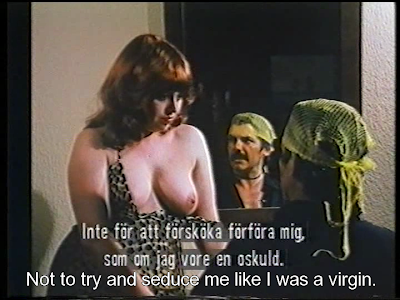 If you have seen any of the Candy Coster directed porn films, well, you know the deal. There is a lot of goofy humor on display as several different couples check in to a hotel and find different configurations to get carnal in.  Be it the stuffy guy that has the ugliest scrotum in the world bitching about paying a tip to his bellhop with equal fervor that he brings to his wife spending too much on perfume.  He should have asked for his money back on the fright wig she bought if you ask me!   And yes, I did mention that horrific ball bag.  Man, topping Mark Shannon, whose appearances on DVD only confirmed the appearance of the third mini-nut I'd noted in all those 7th generation VSoM tapes!  This one is worse.  If Shannon is a tri treaded robot blob, this one is a dried prune with a floppy undercooked slice of McRib jammed on top. ARRRGH.
But again, I admit it, this stuff amuses me to no end. Yes, I love it! 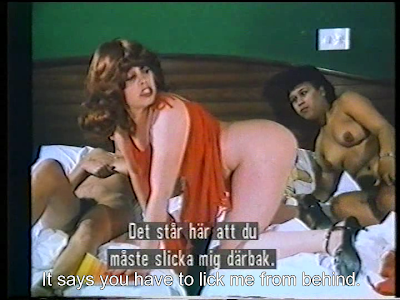 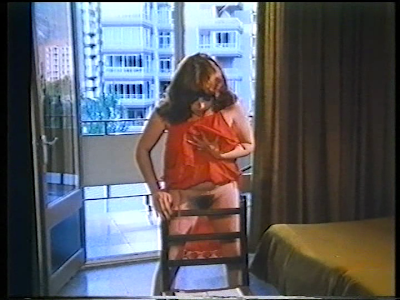 We have one couple that finds a husband learning that his wife has a nympho-maniacal streak a mile wide, demanding that he satisfy her at least twice per hour, every hour.  If he can't do it, well...someone will have to step up. And he is HAPPY to let her do that!  Then there is the strange case of the man that wants to screw his new wife, but there is a hitch. Her adopted sister goes with them everywhere. At first he is a little grossed out, but lets just say not only do the pair travel together, they like to do everything else together. Be it sharing another flaccid bit of pounding or engaging in a triangle of muff n' stuff with Lina Romay-the pair surely don't lack energy.  What each person may lack a bit in porn star looks, I guess they make up for with comfort as Lina had mentioned in the 1 Shot booklet, they tried to find people they liked to work with on these quickies.  They try... with varying results both as pornographic stimulation and confidence builder for the viewer. 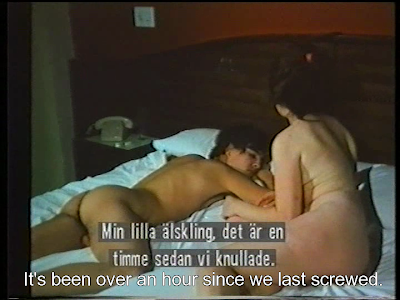 Lina herself is the draw here, and I'm going to say it again. Regardless of age, size or position, Lina is a favorite of mine. She is happy to play silly while having her nether regions tended to by a variety of soft organs all the while happily keeping her eyeline to the camera (hey, she directed this!) while properly fellating a friend.  And speaking of friends...Jess Franco icon Antonio Mayans appears as a totally ridiculous "star" that Lina pines for until he finally gives in.  Lina has to have sex with a chair AND two women to get his attention, but it works.  The pair have worked together in many different situations, and long time Franco fans will enjoy their banter here, it is obviously a quick bit of fun and silly messing (and fucking) around between friends-and these scenes are head (giving) and shoulders (straddling) above the rest.  While I can understand some Franco fanatics not wanting to go deep into Lina's porn films, I find them to be as much a fast doodle as many of his more recent shot on video films are.  Familiar faces, zooms from above and groovy music by Jess Franco!  What more could you ask?  Hell, there is a messy messy bit of facial frosting that had me both amazed and amused at the same time...bonus! 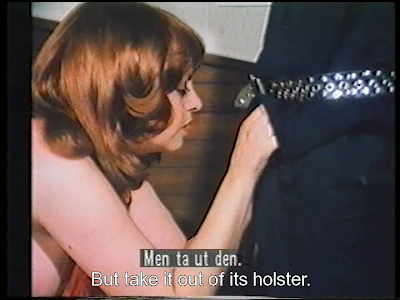 Also of note is the title of this film...I know that a lot is lost in the cinema of Jess Franco, and Lina as well, in translation. Many of the porn films have joke titles that are definitely rugged slang that undoubtedly was there to amuse the theatrical patrons paying to see these on release.  The translation of Para las nenas, leche calentita was so bizarre it made little sense literally. Luckily for me I have access to a truly gifted Pornolinguist in the Pornolinguistic Carnologist (tm DZ)...Marta!  I figured out that Mi conejo es el mejor wasn't about a rabbit, but My Pussy is the Best (don't believe Lina?  click HERE and join me in a moment of FapFap)...but this one would have eluded me.  So, step back in time with me, listen to this description of the title and then wonder if you would have walked in to that theater.  I would!! 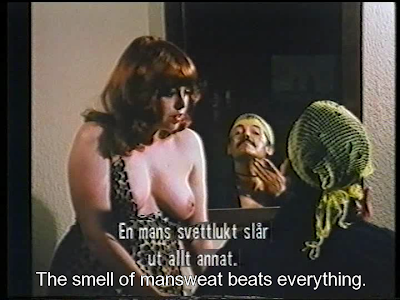 So, what does the title mean? Take it away O' Pornolinguistic One... 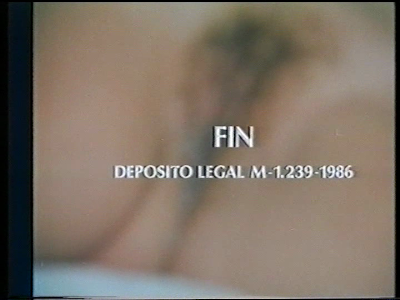 David,
This post is just all kinds of awesome! This blog continues to rock hard. Thank you!

How about a Belinda Mayne undress friday? I'd look at taht!