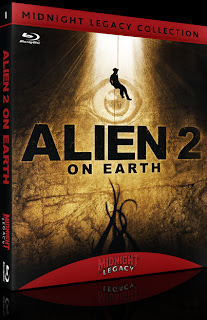 If you had told me that there would be a non bootleg DVD of Alien 2 – Sulla Terra on German DVD I wouldn’t have believed you. So, imagine my surprise when this project from the people behind Midnight Video and Chrome Entertainment came to pass.  High Definition European Trash Cinema has a new home, and Alien 2-On Earth is the harbinger of many things to come I hope.  But more on that, and the disc, after we look at the greatest, and least likely, beneficiary of an HD transfer in many years.

Alien 2-On Earth is a very very simple film.  While it may bear minor similarities to Alien, exactly two little bits, it is a fun and gory diversion during the brief running time.  Basically, after some rugged looking stock footage (with characters being dubbed within the footage!!) reveals that a space capsule is returning to earth we meet the pretty Thelma. She is a spelunker. She is played by the sexy and HD topless Belinda Mayne! She is also psychic. In tune with Aliens psychic!! And those Aliens are about to be Sulla Terra brothers and sisters of the Trash Cinema cult!  She finds this out while on local TV unfortunately, as news producers ponder the mysterious circumstances around the capsule landing without a crew.  So, this a bad news day and the stock footage can’t save it. The hot cave woman collapsed and the space craft was empty dammit. But this is good for us!  Why?  Because the rest of the spelunkers are bowling!  Nothing says SPLATTER like Italians bowling in High Definition!

The group heads out to finish their last expedition into an incredible cave system and drive for minutes of screen time.  Luckily, while they are driving the first ultra excellent scene occurs as a little girl finds a pulsing space rock.  After futzing with it for a bit, her mother looks for her and finds the wee girl has NO FACE!!  This Alien doesn’t just give you a face hug, it gives you a full throttle facial excavation.  But now we know that pulsing blue rocks are bad.  And guess what the spelunking soon to be splattered bring along below ground with them? Blue Rock.


Blue Rock throbs.  People die in hideous fashion. Alien is loose.  But wait…there is always a catch in Eurotrash isn’t there?   Thelma seems to be an Alien Scanatrix that can cause headsplosions! AWESOME!  The Alien chases and throbs and squashes, squeezes and squishes the hapless rock roamers in grand fashion.  The POV shots alone make this film worth watching, especially the Dangling Dongs of Dread that slap one unlucky to death. FAPFAPFAPFAPFAP!!

And you want resolution? Well, Alien 2- On Earth is ready to frustrate the hell out of you, but in glorious fashion as the survivors must first stare at a car and then survive…THE BOWLING ALLEY. This film contains an alien chase climax in ALIENVISION through a HD bowling alley.  I don’t have to qualify the previous sentence as awesome do I? Nah.

Alien 2 – On Earth definitely is a curiosity that has remained fairly obscure. I have a Japanese VHS in my basement, but I think I don’t qualify as a normal person, or even a normal European Trash Fanboy.  I’ll watch anything, and on occasion and during some stretches, Alien 2 has that “anything” quality.  Ciro Ippolito was more of a producer and did not do a lot of other films that would appeal to trashers, so it wasn’t going to be a “missing link” in a filmography either.  Instead, it has found some fans, lots of detractors and has only been available in clunky presentations around the world.  Not so any more.


I’d look at this film and advise that this is no Eurotrash Cinema 101.  Nope, this is 305 level materials in many ways.  It wobbles between intensely cheap setpieces, obviously dragging around waiting for the next affordable push in the narrative which is juxtaposed with an outstanding location that gives the film a ghoulish texture once the group heads underground.  And when you return to the once harmless bowling alley, the mechanized nature of the sound design actually helps generate a funky tension as we wait to see an Alien that never does appear outside of a throbbing perspective shot.  Ippolito knows what he is doing, including lots of hand held camera shots underground that add to the atmosphere.  The gore is fantastic when it happens, though most of the set ups are absurd.  I truly love that bit when the psychic Belinda Mayne (did I mention her topless scene is now in HD?) starts to communicate with the soon to be chomped Cliff in a weird echo tone-and then she warns him the Alien is above…and then it snags him up as her voice echoes away.  Great!!

But that isn’t all. Amongst the easily recommendable, there are lots of little touches that I like to look for. Michele Soavi typing with two fingers in a cave.  Two people staring at a parked poice car for more than 60 seconds of screen time.  Psychic head explosions just happen without anyone seeming to wonder how or why. And this is just a few of the little moments this trash fanatic keys in to.  When you can just tell that the crew was out in the earliest A.M. waiting to film on empty streets for a few minutes and they pull it off, I get excited. And Alien 2 – On Earth has one of the best scenes of that type, followed by a totally silly ending that I’ve ever seen!

While the film doesn’t carry a great pedigree, the soundtrack is awesome and utilizes the De Angelis Brothers both in the scoring department AND as Oliver Onions cranking out the cheesy disco / funk / soul silliness. The tunes are fun listening and perfect for a bunch of doomed spelunkers to drive their ugly vehicle through the deserted back roads to, but the score features an awesome fast paced Jaws styled drone that I can’t get out of my head.  I need this soundtrack. Now.

A feast of unexpected pleasures, moderate tedium and loaded with familiar voices and grooves, Alien 2-On Earth is the kind of film the addicted need. Obscure, bewildering and lots of fun-it hits all the notes, low and high, that I love.

Midnight Legacy itself is an interesting company-and much was made of them before this release.  Midnight Videos Bill Knight, one of the earliest pioneers of European Trash Cinema on the bootleg circuit, was always a quality conscious guy. Well, that has carried over in spades with this first release. I have to say that seeing the intensely familiar “MIDNIGHT” font in High Definition on my TV was mind blowing. I felt a rush akin to the years I spent looking for films that Bill could provide not only quickly and seemingly with ease, but in good quality and most likely not recorded over a family picnic or All In The Family tapes. Yes, I’m looking at you Weisser.  I first saw Robowar and Shocking Dark with the MIDNIGHT logo, and this felt like a weird, positive, evolution of my habit.  Also involved is They Call Her One Eye license grabber and internet boogeyman Dolph Chiarino.  Well, I can tell you this. He is obsessed…OBSESSED…with quality. I’m not a number cruncher or holding up any kind of Oscillation Overthruster to my television, but the quality of this transfer is not stunning, it’s staggering.  The caves are perfect as a technical challenge as not only do they make a nice setting, but the amount of detail and texture on the Blu Ray truly boosts the atmosphere in those caves.  Plus, I have no doubts that the transfer is “correct” and as intended in Midnight’s hands, I can see these effects as never before. And they are good.  The sound doesn’t pop and wobble and the video is rock solid. That is what I see.

Also, the menu system does something I really appreciate. I can dig how much fun it must be while designing motion menus and the like, but I get really and truly annoyed by ones that feature spoilers and gore shots.  While I may have watched a movie before, I don’t enjoy watching all the big pop shots just as I sit down to view it again!  No such nonsense here.  The extras are rather sparse, but the outtakes are all interesting and look great and there is a trailer included as well.  You may go in to these packages for the extras, but frankly, I don’t. While the disc carries a stiff $32.99 price tag, I would rather get a great transfer of the film than a bunch of fairly interesting material that seems to be there more to combat the “terrible film, nice transfer, awesome extras” school of reviewing at times.  But hey, that is just me.

To be fair, I have to add some gripes with this disc, which comes within microfibers of being my favorite of the year (sorry, Starcrash gets that honor)…though it is not on the disc. Think of it more as constructive critique.  The films are always, for me, the thing up for review more than any technical specification.  The packaging on this film is a bit of a drag. While I understand going large on a first release, there is a total of 47 words about the film on the sleeve. Another paragraph touts it as a complete edition. And then another paragraph talks about it being a restored edition. And then a sidebar talks about the commitment of Midnight Legacy to complete and restored editions!  ARRRGH!  I miss LD packaging for the room allotted for artwork and text. Blu Ray is the smallest format for packaging yet. The disc has proved to be fantastic and the film is ready to be judged as intended. The job is done, next time just let that be enough, though I do like the sidebar rev up to Midnight Legacy and their intentions.  Frankly, I don’t care what anyone else thinks, I believe ‘em.

Also in the C’mon.....department. No subs for the final line?  Again. Arrrrrgh!
But this is all small stuff because Alien 2-On Earth is the ultimate disc for the truly jaded European Trash Cinema collector. My collection feels stronger for owning it.  If you’ll excuse me I must stare at it…until a head explodes!!

*note that I don’t have a Blu drive, so screens are sampled from the much more tech savvy folks at DoBlu.com-which you can read right here.*
Posted by David A. Zuzelo at Wednesday, December 15, 2010

Ah, the girl with no face...
I had many nightmares with her.

Thanks for the review, but I think I'll stick with my german dvd. This new one is expensive!

I was waiting to read a review from someone I really trust.