I'm not good at eulogizing my favorite directors. At all.  On Wednesday Jean Rollin passed away and I have to say that I found the news very sad. There are many many great resources to see his work on DVD thankfully, and for those that have not I can't push you towards them enough.  Also, you can learn tons of interesting facts and luxuriate your brain in acres of gorgeous images by visiting some of the resources on the web, my favorite being FASCINATION: THE JEAN ROLLIN EXPERIENCE, which is a lovingly crafted blog on all things Rollin.
So I can only speak of what I know.  Jean Rollin had a fantastic impact on me, both as a film fan and as a moderately creative person.  After diving headfirst in to the Italian Horror and Trash cinema pool, I was hungry for something different. Rollin certainly provided me with that.  And much much more.

"The first vision I had was two clowns playing piano in a cemetery. I have never seen that in a film before and I wanted to see it, so I just wrote it in. Afterwards, I reused the image of the clowns in other films as some sort of quotation. I like that; I often make references to my earlier films. It connects dreams and stories like a construction system and the audience can make their own thing out of it." - Jean Rollin (taken from an interview here)

Being deep in to the gore and splatter of Italy was most likely not the right place to begin with the cinema of Jean Rollin. Gorezone magazine couldn't prepare me, though I was lucky enough to be discovering Videooze and European Trash Cinema around this time as well. The copies of the few Rollin films I first encountered were usually poor dubs, without English dialog and touted as being violent masterworks by various catalogs. The films were frustrating and fascinating at the same time.  I never knew what to expect.  After my first viewing of an unsubtitled Night Of The Hunted I had no idea what I'd even watched.  But they were VERY different from what I'd been told.  Exciting, but I wasn't ready to really experience them they way I wanted to.  Video Search of Miami producing expensive gray market releases, with subtitles of perhaps dubious nature at best, was a bit of help...but the cost became prohibitive and I saw perhaps three of them before moving on.  But I never forgot the images, and women, of Requiem For a Vampire.  I just wasn't ready, because instead of insane thrills, easily attainable from the works of Dario Argento, Sergio Martino or Lucio Fulci...these films offered chills that poked at the brain and thrills that rubbed at the crotch with equal abandon.  Le frisson des vampires indeed. 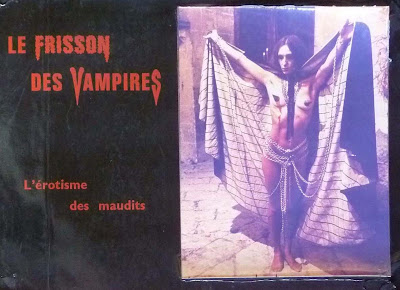 I doubt he would like this much, but it was Jess Franco and his labyrinth of celluloid sins that brought me back to Rollin. The two don't do the same thing at all, but they are both outsiders when considered against the "mainstream" of horror and cult cinema. Smaller budgets, less interest in effects and stories and much more ambient energy.  Franco casts a strange spell of smoke and crash zoom pussy mania, regardless of genre as only he can.  Rollin weaves the same strange spell, but takes elements from a much different, perhaps more imaginative, inner ether. After exploring a lot of films and putting them in the context of Jess Franco's career, it just so happened that the Rollin catalog began to hit home video with gusto thanks to Redemption Films in the UK.  With proper translations and cleaner images than I'd encountered before things began to take shape.

The films begin, as he said in the above quote, as disconnected visual cues and weird images that you couldn't make up because they are from such a strange mind. And then, you realize you aren't watching a single film, but a page in an encyclopedia of strangeness.  A world at first alien and off putting becomes a dimension where beautiful women and traditional monsters meet in a hazy purple fog that sucks the right viewer in and leaves them feeling good to take a walk on the beach. Oh, that beach.  I knew that I was sprung for the Rollin when I started randomly jotting down not only plot elements to keep the films straight, but how it felt to hit the "fin" moment. Sometimes the same film could feel sad and depressing on one viewing, and wonderfully romantic on another. Sort of like how life can treat you.

I realized Rollin was providing the headspace, and I was letting his work affect me however it would at the given moment. I remember many viewings by where I was, what was happening, who I was with...even if I got laid! On the rarest occasion you too could score a fine nights fun thanks to Rollin.  Well, I'd like to think it was me, but I know that Jean Rollin flicks are made for the lovin' baby!
This destroys my ability to critique his films.  And that is fine by me because I am content to love them instead. 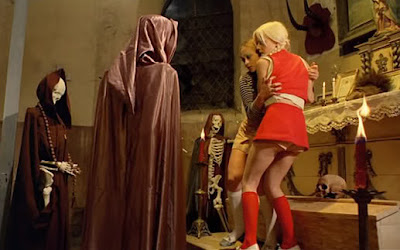 So, I've followed the films through different paths and there are a few things that I've learned.  Vampires are cool. Twins are hot. Vampire twins are hot and cool.  Clowns rule, especially when they don't belong in the scene.  Bats love blood. Movies can open your mind to itself. I don't have a favorite Rollin film, they all inform the one just watched. Bats love pussy.  Childhood is a wonderful place. Never losing your imagination is important.  Zombie Lake, and Eurocine's strange idea of what is good, are never endingly entertaining for me.  Creating art is great, creating your own is better because it holds up better.  I never had dinner with Jean Rollin, I wish I had the opportunity. And yes...Jean Rollin could shoot a mean sex film.  He could also make films that were thrilling. Chilling. Romantic. Sad. Funny. Wild. Weird. Sexy.  Sexy Sexy Sexy. And most importantly of all, they will always entertain me.  Jean Rollin was a gift I found thanks to those cinema fanatics that gave me the signposts to begin to appreciate him.  I'm glad I opened the present and then made the films my own.
We all have the work of Jean Rollin now and I hope everyone that reads this has their own little vision of the place his movies came from, it is a rich wonderworld that will find you looking around every headstone hoping to find a naked clown, or at the least a long toothed vampire nurse.  You never know what hides behind a hood in a Jean Rollin film. 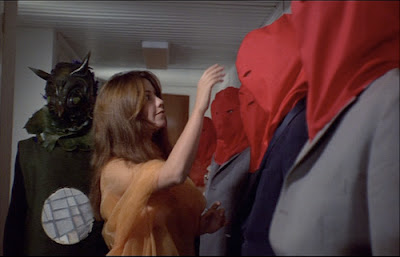 Thank you Jean Rollin, my imagination is that much brighter from your being here. I hope your family can take comfort in knowing how far and wide you were admired.  I know I'll be seeing you and your world for the rest of my days.  I hope everyone reading this will take a trip there, even for an hour. 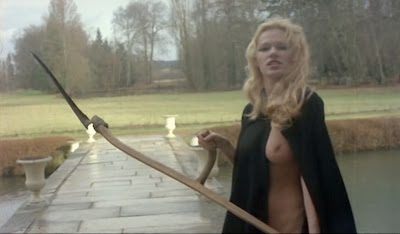 "During one screening, I sat in the audience to listen to what the people said about it. Some just came because of the nudity, some came because it was a vampire film, and others came because they wanted to see something unusual and bizarre. There is no typical audience for my films, and this leaves me in a kind of vacuum. Do you know what I mean? I often had the impression that I did what I was doing solely for myself." Jean Rollin 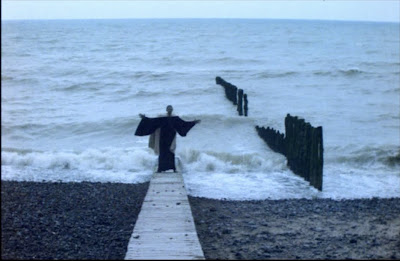 Hey, who says you're not good eulogising your favourite directors. This is a wonderful tribute that actually makes me want to go out and explore some of his films.

I fondly remember meeting Rollin years ago. He was a man of few words, but very kind.
It was also through Italian horror and Franco that I got to know his work, which I found to be very unique to say the least. In my opinion, one has to be in the right mood for a journey through Rollin world, but the trip is always a visual and mental thrill.

Nice tribute---just did one myself. CAGED VIRGINS (a.k.a. REQUIEM FOR A VAMPIRE) is my fave Rollin feature---he made such great LOOKING films, always bordering on art house.

Hey David,
Sorry I wasn't able to comment sooner. Thanks for this wonderful tribute and for the nice words on Fascination. Your support is greatly appreciated...and again, thank you for the terrific tribute to one of the greats.

This is very nice Dave. Thank you for encapsulating my own feelings. I need to revisit some favorite films now...