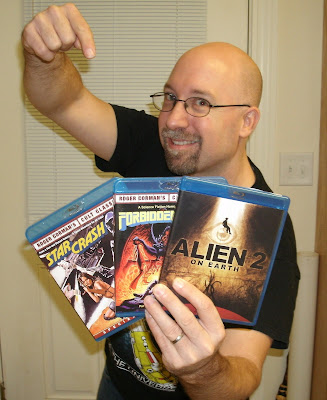 This year was an amazing barrage of Blu Ray, and you can't go wrong with the trilogy of Oogy slimy monsters, gore and wild bikini space adventure.  Shout Factory gave us several Corman released films, but nothing can defeat STARCRASH as my favorite Blu of the year.  This is THE trilogy of wacky SF for your trash cinema nerd.

First we have ALIEN 2 - ON EARTH from Midnight Legacy.  My review will be up shortly, but I can't recommend this one enough for the right viewer.  European Trash Cinema Class 305 will be meeting at your home as you enjoy random psychic alien head explosions and staring at parked police cars.  An amazing disc and one for that "special" collector!  Yeah, I've watched it and rewatched it and still can't believe the quality treatment this EurObcuro title has received.

Then we have Forbidden World. This was the greatest Drive-In Movie I'd never seen before.  Loaded with nudity, slime, violence and packed with a great transfer and solid extras, you won't regret getting this one!  Your recipient will thank you while they watch the "sauna lovin'" scene.  I sure would! Twice!!!  Shout Factory rules.

And then we have Starcrash.  Luigi Cozzi is one of my favorite directors, and though he will dismiss this as a kiddie film, the handmade look, the fact that it was a rip off of the Star Wars NOVELIZATION instead of the movie and Caroline Munro in a space bikini kicking ass is irresistible.  Shout Factory strikes again!  Easily the most fun film I've seen in High Definition...ever!

Why why why must the Shot! Factory BR:s be region-coded? Not fair! :(

Very true Lars, I wonder if it is from the Disney angle of the Corman library?