Halloween Horrors 8-The Devil's Men / Land of the Minotaur

Those who enter the forbidden chamber of the minotaur must die..die..die...
I had no idea that I was going to get to see the gore n' nudity edition of Land of the Minotaur, a title I've always been intrigued by, completely by accident.  Years ago I traded for the UK disc of THE DEVIL'S MEN and it sounded like a good title to watch during October.  Now, this is not a film with an excellent reputation, but I found it to be great fun, like watching a Charlton comic book picked up at a Woolworths for a dime-and it comes packed with a Brian Eno flexi disc of spooky slashsawing to boot!  Peter Cushing glowers, there are tons of sexy hotpants and tight shirts bits and you even get titles that are exhaled by a fire blowing stone minotaur!!  Bonus! 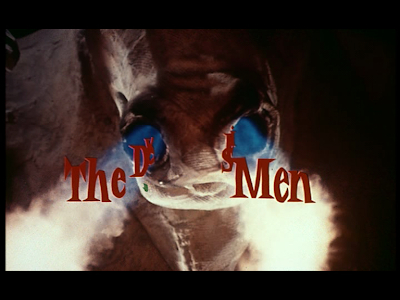 Director Kostas Karagiannis may not have a great handle on fast paced action, but he does throw us square in the middle of sinister goings on and keeps interest high for the wandering eyes by adding in some lovely nude ladies on occasion.  It really helps that we have a multicolored rainbow of cultists doing a groovy sacrifice sequence to get us started.  We know trouble is afoot, and trouble has a hepcat tailor!
After Father Roche (Donald Pleasance) warns some nice young folks not to go poking around some ruins, they do and end up on the receiving end of the Cults wrath.  Roche calls his pal, and apparent monster smasher, Milo Kaye (Kostas Karagiorgis) into action.  One of the girlfriends of the missing lads also arrives, to keep the skin quotient high!  Luan Peters looks like a Tom Sutton woman in action as the girl on the scene, one that seems to get left behind a lot actually, and shimmies and screams her way through the role with great gusto.  Of course, the cultists begin to attack and there are several chases that lead to Peters getting smacked around as a silly girl by the hero (yeesh)--but it all falls in to place as the sinister Carpathian, Baron Corofax, steps up the game and is looking for more sacrifices.  It helps that Peter Cushing plays the Baron, though for this writer I must admit that I've seen so many Neil Vokes images of Cushing that the man looks more like a moving comic character to me than the other way around. 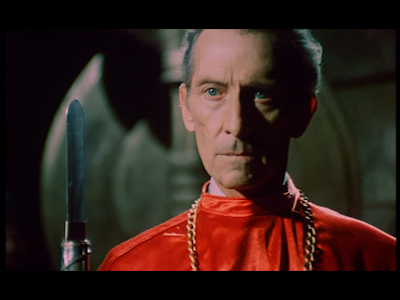 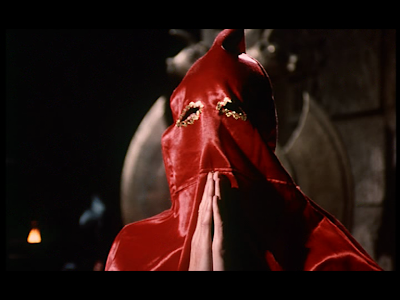 While it is far from perfect, there is a lot of fun landscaping to be done in this Land of the Minotaur.  The costumes are utterly cool and the night time stalking and prowling cultists are exceptionally spooky, and when the final trio of intrepid minotaur hunters are wandering the ruins and descending down the caves it has a great spooky feel.  That atmosphere is undercut a bit by the silly leads, though I take that as a positive as I couldn't help but smile and think of all the great covers and stories from Charlton Comics MONSTER HUNTERS as I watched them wander around and come face to face with fire, exploding statues, Peter Cushing and even some exploding cultists!  There are showers and slapping and a whole lot of yapping here, but hey...it's alright because I still enjoyed every minute of it. 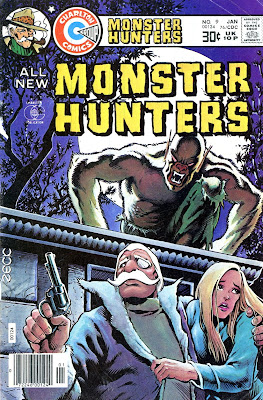 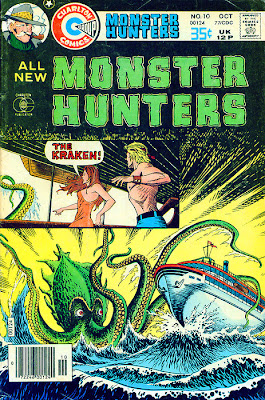 A nice Saturday Afternoon spooky, with some extra breasts and booty--I like this flick, and if you find it in the longer print, I'd recommend it.  It was released by Crown International with a PG rating, so I'll assume that there is a less bloody and breasterific edition out on US DVD-which is a shame.  While I wouldn't climb a Kraken to find it, I would recommend the hunt.  Fans of cool soundtracks will enjoy the Brian Eno scraping and tingling for sure, but for me...the end credits song is one of the BEST 70s vocal horror themes I've heard.  I NEED IT! 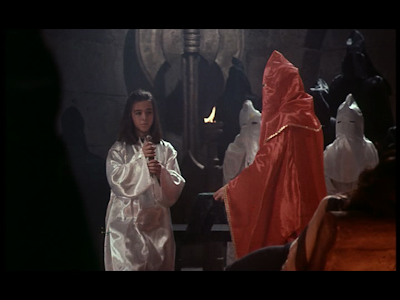 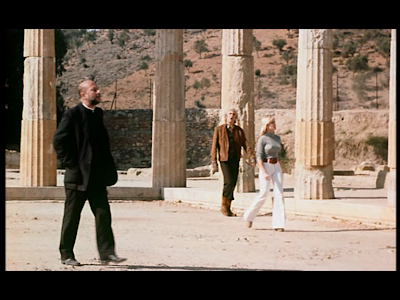 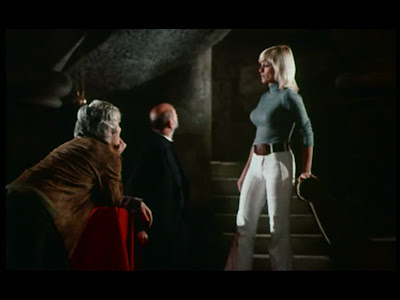 Now THAT is a trio of Monster Hunters! 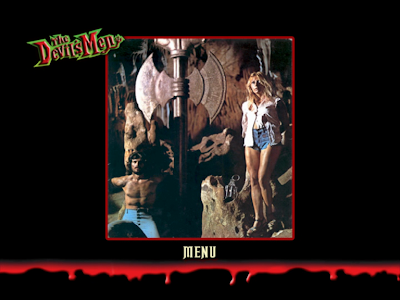 OMG, I had that one with the Kracken!