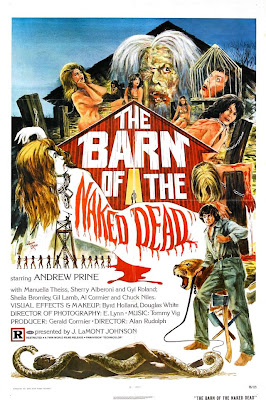 Look look...I can watch the animals from here...
Andre (Andrew Prine) has got issues. Mommy issues. Interpersonal relationship issues.  Circus issues? Well, that last part isn't exactly right.  Instead of a circus this nutjob has set himself up in an H-Bomb testing area outside of Las Vegas in order to capture women and induct them in to his little fantasy world by sniping their car engines and chaining them up for training sessions!  Sleazy and straddling the line between exploitation and horror, Barn of the Naked Dead / Terror Circus manages to hash the two elements together to make the most of it's running time.  Because just as you wonder how another hour of Andrew Prine twisting his face around and shouting can carry this one, in comes two doofy guys to be killed by a mysterious HAND with burn marks all over it.  You know...twisted mutant monster man is a'comin!  And he sure does... Everything comes to a crashing halt when Daddy returns and turns this barn in to a Slaughter Hotel!  But hey, the three lead ladies agent and a state trooper will solve the mystery, just a bit too late. 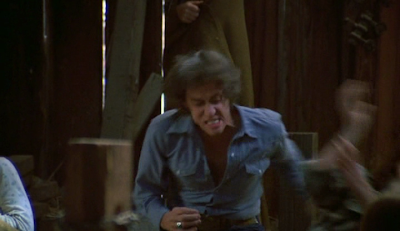 This was exactly what I needed right now, in the midst of Halloween Horrors I've been jonesin' for some good exploitation fare, and Andrew Prine screaming and flailing around with a whip and babbling about his imaginary circus to his "mother" is rambling and goofy enough to get me in that happy state of trash film mind that will send me recharged in to the world of horror films.  PLUS, it maintains a horror atmosphere once it introduces the promise of a monster. But unlike many other exploitation films that promise something to happen, this movie delivers in spades.  The monster shows up and rampages around and, to my surprise, really gets the upper hand!  GO MONSTERS!!!  Of course, it does take any form of interest you built in the characters, ball it up and dump it into a deranged dump of nihilism.  But, that works for me, especially in a month of monster movies. 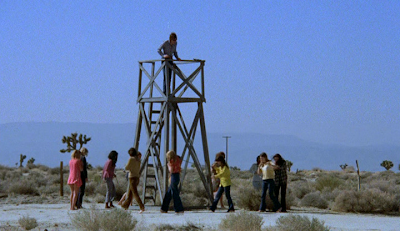 While the film is certainly almost entirely on the shoulders of Andrew Prine, who doesn't just keep it going, but hurls his scenes AT the viewer with a crazed intensity that you have to love. Most of the cast, especially Manuela Thiess as Simone, are fairly spot on-and the insane captive girls all are convincing. The "rescue" subplot is silly, but has a huge payoff that I won't spoil.  It was just...this....close! 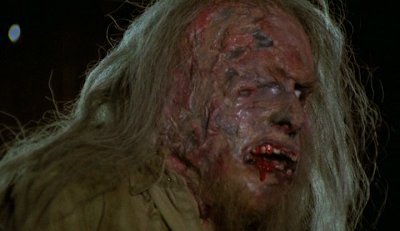 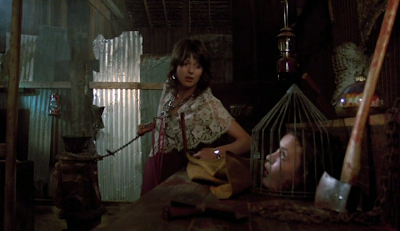 Directed by Alan Rudolph, who would later go on to other fare, the movie isn't a stylistic triumph by any stretch. However, the final 10 minutes are great-the editing and music give it a weird atmosphere that comes out of nowhere in the best possible way.  Without the Tommy Vig music and it's warped and perverted circus music the film wouldn't work nearly as well. For a film about a pyscho circus, it sounds like a sickly band of clowns losing time constantly.  Excellent! 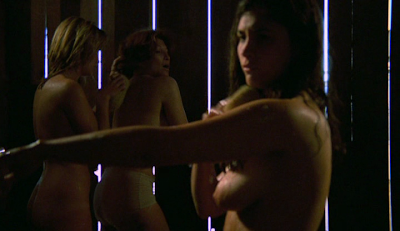 There is not a lot of Naked in the Barn, but here is some!! 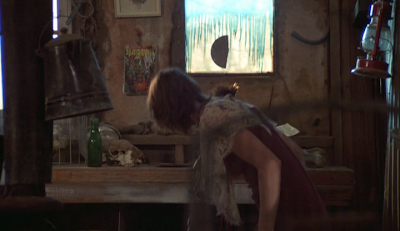 Click to see a larger image...check out the SEA DEVILS comic on the wall!
Posted by David A. Zuzelo at Tuesday, October 12, 2010

See, when I first got a copy of this from the grey market I bought it by the title alone. I did this with three movies. The first Sometimes Aunt Martha Does Dreadful Things is probably one of my favorite sleazy exploitation flicks. The second, Tower Of The Screaming Virgins, is a swashbuckling exploitation masterpiece. After these two I figured I was on a role. This flick had a lot of BARN in it. It had a lot of DEAD in it. I really felt super cheated on the NAKED part of it. Sure, it sold the movie to me, but then it didn;t deliver. The other two do in spades. well, like Meatloaf says, two outta three ain't bad.