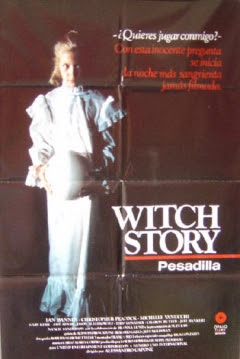 I'm a sucker for late era Italian horror films, and Alessandro Capone's STREGHE - WITCH STORY is a fun last gasp of gore and mayhem.  To give it an extra OOOMPFH I finally managed to check it out in full widescreen thanks to the Japanese VHS version, which gave this little film a nifty shine that it might not have had on full frame crappy vhs from 20 years ago.

A tired and well worn plot doesn't hold this film back from being fun. After a flashback to a witch being burned alive by a small Florida town (??)-we quickly realize that the evil woman's daughter is not just watching for a laugh. No, she is going to be trapped in time as her hells bells loving momma goes poof.  Years later, in the films late 80s present, a bunch of college kids go to the house to renovate it, almost exactly like the earlier watch of Sorority House Massacre 2!  They kibitz. They have sex. They have one dude that sings very poorly... and then they die!!  But the witch is clever and takes three of the most attractive of the ladies and converts them to her cause. So, you have carnage being dealt not just by the wicked ghost, but by the hands of the kids themselves.
Glass breaking and axe slinging ensue.  Also add in a priest that knows what is going on and may be able to stop things and you have a well tested plot.  But we don't watch these for plots many times...

Witch Story plays like a much more carefully shot Filmirage production from around the same time and feels a whole lot like Killing Birds minus the birds, yet with more killing.  The cast is really flat, and after the opening sequence the whole thing flatlines excitement wise for a bit. But don't let that stop you!  After all this time I've come to except that I embrace these time filling scenes and have found the zen of enjoying them. Witch Story doesn't equal Demons (what does), but also avoids being utterly generic by employing the girls to do the dirty work, giving each scene it's own dynamic.  Also, I have a thing for shattering glass and people KIYIIIIIIIIIING through it to deliver a scare (kind of the Ninja Condors 13 effect for horror films)-and this has several scenes.

Alessandro Capone is no Lucio Fulci (or Joe D'Amato), but Witch Story shines in it's full scope presentation of spooky lighting and outrageous action when the time comes.  It looks really cool and features a scene that has a witch possessed girl THROW a guy through an upstairs wall that leads to him crashing in to a swimming pool.  It looks awesome.  And then she pops up behind him WITH A CHAINSAW!!! Yes, Italian Horror, no matter the vintage, always finds something to offer me.  Also notable is that Filmirage and Mattei score maven Carlo Maria Cordio does the score and it is as great mish mash of early 90s Filmirage "wwwwwhhheeeeerrrrryaaar" sounds and rhythms.  I have to admit to buying the Killing Birds score, and this one would be equally welcome.

Violent, in scope and drenched in Italian style splatter sauce when it wants to be, this is the tale of some cutouts that get chopped up.  Essential for those that have it all when it comes to EuroSplat!
Posted by David A. Zuzelo at Sunday, October 10, 2010

Ya' know, looking at your screencaps, I'm not sure if I ever watched my Japanese prerecord of this!

Well worth the time in my opinion Bruce.